Why Ghostbusters Is the Must-See Movie of the Summer Season

Almost everyone asks, “Why remake a great movie?” But very few, outside of those who stand to make money off such an enterprise, ever ask, “Why not remake a great movie?” Maybe it’s smarter to think of movie remakes as cover songs, works that test the power of the original without necessarily dissolving it. “One of the ways songs survive is that they mutate,” cultural critic Greil Marcus has written. “Pop songs are always talked about as ‘the soundtrack to our lives,’ when all that means is that pop songs are no more than containers for nostalgia. But lives change, and so do soundtracks, even if they’re made up of the same songs.”

Ivan Reitman’s 1984 Ghostbusters has become a fetishized talisman, a picture viewed and reviewed for years by children who are now, ostensibly, adults. Some of those fans don’t believe it deserves the chance to mutate, as director Paul Feig learned when, via Twitter in October 2014, he announced that he was remaking the film with “hilarious women.” Immediately, a small but vocal group of disgruntled Ghostbusters purists responded by trying to zap the idea with their proton packs. The braying intensified in January 2015, when Feig announced that Melissa McCarthy, Kristen Wiig, Kate McKinnon and Leslie Jones would play the roles originally filled by Bill Murray, Dan Aykroyd, Harold Ramis and Ernie Hudson. Some tweets were bracingly direct: “Lazy Holly­wood film making ‘let’s make a ghostbusters remake but with women!’ Only soccer moms and feminist bimbos will watch that trash.” Others may have required creative parsing of grammar but still registered as clear expressions of dude anger: “And by the cast as ‘all female’ & ‘reboot’ also must makes it seem like just a weak gender pandering than actual effort.”

On July 15, audiences will get to see the new Ghostbusters for themselves, but the trail of tantrums its director and stars have had to navigate is a long and winding story on its own. There were more trolling tweets when Sony released the first trailer for the movie, in March. At about the same time, Feig’s casting choices met with a different sort of criticism: some observers felt that Jones’ role as a New York City MTA worker was a racial stereo­type. Jones defended her role, asking, “Why can’t a regular person be a Ghostbuster?” but still found herself fending off attacks on Twitter.

In the early days of the outburst, Feig refused the bait. But in late September, he lost it, responding to individual examples of rampant Twitter jackassery first with measured language—“God, you’re tiresome, dude”—and later with the outrage of a reasonable guy driven to madness by idiocy: “You’re an ass. Oops, did I say that? #drunkentweet #notreally #sickofthehaters #enough #freedom #onvacation.”

Feig has since apologized to members of the “geek community,” acknowledging that not all fanboys are raging misogynist goons. It’s a measure of the weird world we live in that Feig would have to state the obvious and then apologize anyway. But it would be a mistake to think of his retaliatory strike as a lapse in judgment, when it really amounts to a mini cultural victory. We’re living in pissed-off times. Two of our three potential presidential candidates are running on the fumes of American anger. Bernie Sanders hasn’t weighed in on Ghostbusters, but in a short video posted in January, Donald Trump made his confusion explicit: “And now they’re making Ghostbusters with only women. What’s going on?” One of the charges often leveled at Hillary Clinton is her lack of warmth, which makes the rules here doubly confusing: a woman can’t be a Ghostbuster, and if she’s lacking certain requisite feminine qualities, she can’t be President, either.

It’s a grim landscape. That’s why Feig’s fiery defense of both his project and his actors—he also came out in Jones’ defense when the criticism of her Ghostbusters character became nasty and personal—means more than it would in any other year. And maybe, just maybe, it marks the beginning of the end of the tyranny of fanboy culture. If we accept that social media represents not the taste of the masses but that of an angry and extremely vocal minority, then there’s no need to allow that minority any stake in what movies get made, or in how those movies get made. Even so, studios care deeply about how moviegoers respond on social media to a film. Feig’s lashing out may have seemed intemperate to some, but it was really the best thing he could have done. If part of a filmmaker’s job is to fold in the face of bullying, we’re truly lost. Movies are made by directors, not mobs. You could also argue that all Feig did was express a version of the resentment that simmers inside most of us perennially, and not just when we’re talking about moviemaking: Why should idiots ever be allowed to call the shots?

Anyway, the anti-remake creeps have made Feig’s version the movie to see this summer. Plenty of people will go hoping that it will be funny. A smaller, more hostile group will go just so they can carp about how bad it is (no matter how good it might be). Either way, tickets will sell. Meanwhile, Feig, who has made it his mandate to forge space for women in comedies such as Bridesmaids, The Heat and Spy, has struck a victory against Internet morons. He even had an answer for the ranters who claimed that remaking Ghostbusters with women would “ruin” their childhoods: “It’s so dramatic,” he told Variety. “Honestly, the only way I could ruin your childhood is if I got into a time machine and went back and made you an orphan.” If Reitman’s Ghostbusters had any value in the first place, it will live on no matter what. 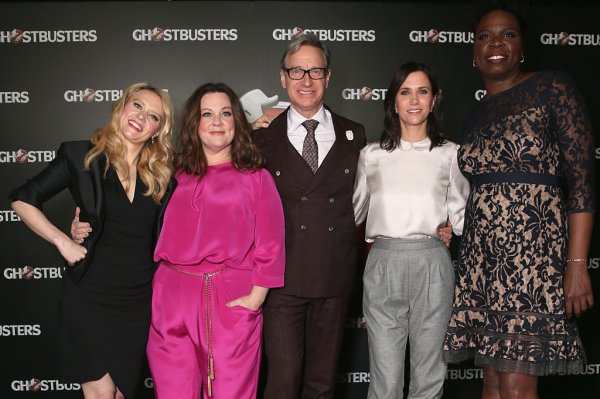