Review: The New Ghostbusters, Modern and Vital, Goes for the Gusto

No one has to love Paul Feig’s new Ghostbusters, or even like it. But anyone who continues to stand against it on principle—“My childhood has been defiled! I don’t like its stars! The trailer was bad!”—is an unimaginative schmuck. Because Feig’s Ghostbusters is its own definitive creature, an affable, inventive riff on Ivan Reitman’s proton-packing caper that exists not to score points, but only to make us laugh. For a summer comedy, there’s no nobler purpose.

Like their 1984 counterparts, the new Ghostbusters—Kristen Wiig’s no-nonsense yet vaguely daffy physics whiz Erin, Melissa McCarthy’s screwball scientist Abby, Kate McKinnon’s deadpan gearhead Jillian and Leslie Jones’ fervent Manhattan history nut Patty—are all classic New York City eccentrics who need to find their place in world of nonbelievers. (Their dimwitted but hunky receptionist, Chris Hemsworth’s Kevin, helps out too, but mostly he’s just ridiculously enjoyable eye candy, a form of gentle revenge for years of stereotypical sexy secretaries.) When Erin, Abby and Jillian spot their first real ghost—a nutso turn-of-the-century murderess, now a listless, translucent jellyfish of doom—they jump and squeal with delight, a spontaneously girly reaction for which they make no apologies. But later, when the ghostbusting gets tough—after a squadron of nasty ghouls descend upon an unsuspecting Manhattan—they wield their ectoplasm blammers with Rambo-like authority.

It’s all presented with a wink—there’s nothing heavy-spirited or assaultive about this Ghostbusters. Feig, who co-wrote the script with Katie Dippold (The Heat), has clearly taken great care with the movie’s tone—it’s as delicately balanced as the wings of a spectral butterfly. He honors the spirit of the original: Bill Murray, Dan Aykroyd, Ernie Hudson and Annie Potts all have cameos, and a gleaming bronze bust of the late Harold Ramis graces the hallowed halls of Columbia University, where part of that Ghostbusters, like this one, takes place. Yet there’s little that’s nostalgic, in the musty sense, about Feig’s reimagined ghostbusting universe: The movie glows with vitality, thanks largely to the performers, who revel in one another’s company, and not in a self-congratulatory, Ocean’s Twelve-style, “We’re awesome movie stars, together” way. Some of their dialogue has a loose, loopy, unscripted vibe, a la Bill Murray’s poker-faced asides in the original. When the heroines take time out from their heavy-duty citizen-saving for an impromptu Patrick Swayze reverie, they’re inviting us right into the crystalline goofiness of the moment.

There’s visual glory here, too: The finale takes place in a dazzling Times Square mashup of past and present, a place where contemporary digital news tickers share space with ghost establishments like Regal Shoes, Nathan’s and an RKO National theater showing Bruce Lee’s 1972 Fists of Fury. In one of the most stunning moments, the women face down a phalanx of sinister vintage Macy’s Parade balloons—floating along, they’re a kiddie nightmare come to life, glowing and gorgeous even as they advance with menacing intent. Their macabre beauty stops the movie for a moment. They’ve come from the past to shake their fists at the present—maybe they don’t like remakes either, but that’s their problem. Happy or not, they’re part of the here and now. This is the kind of movie you make when you ain’t afraid of no ghosts. 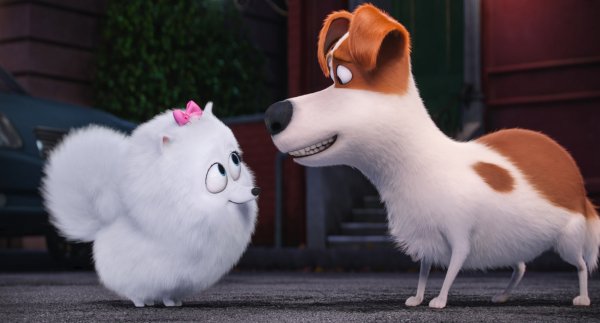 Review: What Do They Do When We're Out? The Secret Life of Pets Tells Us
Next Up: Editor's Pick