In many ways, Eternals is unlike the 25 movies that came before it in the Marvel Cinematic Universe. It has a cosmic scope, an Academy Award-winning director in Chloé Zhao, and a cast of all-new characters. However, it is still part of the MCU, so naturally, it has post-credit scenes—two, to be precise.

Read More: How the Eternals Fit Into the Marvel Cinematic Universe

What happens in the mid-credits scene?

After the initial credits, we cut back to a spaceship where Druig (Barry Keoghan), Thena (Angelina Jolie) and Makkari (Lauren Ridloff) are on their way to find more Eternals and reveal the truth of their mission. They’re concerned that they haven’t heard from Sersi (Gemma Chan) or the others recently, but there’s suddenly a much more pressing issue. There’s some strange light and an eerie presence echoing down one of the hallways, but before Makkari can fully investigate, out pops an empty mug. It’s followed by a leprechaun/satyr-looking creature (animated with some oddly sub-par CGI) named Pip the Troll (voiced by Patton Oswalt). Pip acts as a herald, announcing the imminent arrival of a being who, among other superlatives, is Thanos’ brother? Out from the shadows steps Eros (Harry Styles, in a cameo appearance that brought down the house), who tells the Eternals that they’re going to need his help.

In the comics, Thanos and Eros (who also goes by the superhero name Starfox) are both canonically the children of Eternals who were sent to a non-Earth world, though neither character appears to be connected to them that way in the MCU—at least for now. Those comics explain that Thanos looks the way he does because he has Deviant genes inside him, while Eros, who lacks those genes, looks normal. They are still, however, brothers.

Eros made his debut in 1973’s The Invincible Iron Man #55, and in his early appearance, he fought alongside other survivors of his brother’s initial reign of terror alongside the original comics Captain Marvel. He eventually made his way to Earth, where he would frequently fight alongside the Avengers, using his powers of flight, super-strength and the ability to manipulate people’s emotions. That last power sometimes played out in unsavory ways, as the flirtatious Eros was once, in the comics, credibly accused of sexual assault because he allegedly manipulated his partners’ emotions. (When She-Hulk, who is a working lawyer, defended him in court, she eventually grew suspicious that he’d used his powers on her during an earlier fling and as a result, she beat the living hell out of him. Disney-owned Marvel Studios will probably not adapt this storyline.)

Pip the Troll, for those who could focus on anything other than Harry Styles’ charm, first appeared in a 1975 issue of Strange Tales. He’s a disgraced alien prince who traveled around with members of the Guardians of the Galaxy before buddying up with Eros, and he has the ability to teleport.

What happens in the post-credits scene?

The final post-credits scene takes us back to Earth, where Dane Whitman (Kit Harington) is in his classroom looking anxious. Earlier in the film, he had attempted to tell Sersi about his family history and his own secret before Arishem (voiced by David Kaye) summoned Sersi away. Now, we see what that secret is. He opens a box containing an ancient sword, one that reacts in an eerie way as he almost touches it and it speaks to him menacingly, in some sort of unintelligible deep speech. On the inside of the box, we see the phrase ”death is my reward.” Mustering his courage, Dane resolves to touch the blade, but he’s stopped by an offscreen voice that asks, “Are you sure you’re ready for that, Mr. Whitman?”

It’s reminiscent of Iron Man’s post-credits sequence, the one that started it all, where Samuel L. Jackson’s Nick Fury stepped out of the shadows to tease the Avengers. However, Zhao confirmed to Fandom that this time we’re hearing Blade. The vampire hunter, who was famously played by Wesley Snipes in three movies in the ‘90s and early ‘00s, is indeed a Marvel character and will be played by Mahershala Ali in an upcoming MCU film from Mogul Mowgli director Bassam Tariq. It’s currently set for an Oct. 7, 2022 release.

Comics readers are likely not surprised by Dane’s reveal in the sequence. Ever since news first broke that Harington would be playing a character named Dane Whitman, savvy fans assumed he would be playing The Black Knight, a superhero whose real name is, well, Dane Whitman. In the comics, he’s actually the third person to bear the Black Knight mantle. The first was a riff on the actual Black Knight of Arthurian lore. Created by Stan Lee and Joe Maneely in the ‘50s, he was a knight named Sir Percy who fell victim to a cursed, enchanted sword forged from a meteorite known as the Ebony Blade. The blade passed down his family line, eventually ending up in the hands of Nathan Garrett. Nathan operated as a supervillain under the Black Knight name, but he gave the sword to Dane, his nephew, in a bid for redemption. This version of Black Knight first appeared in a 1967 issue of The Avengers.

As Black Knight, Dane has immense power when he’s wielding the Ebony Blade, but the weapon carries a horrible curse and takes its toll on his sanity and mental health. As it draws blood (something swords tend to do), it pulls its wielder deeper into madness. Over the decades, Dane has been brought low by this curse and on occasion wielded other weapons, though the Ebony Blade remains the most iconic. He has been a member of the Avengers but also has a connection with the Eternals, most notable in a 1992 storyline where Sersi has her consciousness bonded with Dane’s own to stave off the madness, known as Mahd Wy’ry, that Eternals can fall victim to. It was complicated, to say the least.

What does it mean for the future of the MCU?

Both post-credits scenes offer up so much potential for where the MCU—both the Eternals and the franchise as a whole—can go from here. The Eternals’ story ended very much on a cliffhanger, with our protagonist Sersi and her friends having been whisked away across the vastness of the cosmos with the promise of judgment. Eros has ties to the Eternals in the comics, so it’s possible that he’ll help Thena, Druig and Makkari and reunite the gang in their fight against the Celestials, whether that be in a direct Eternals sequel or in some other Marvel movie. We don’t know anything for certain, but since Eternals ends with the promise that “The Eternals will return,” it seems safe to assume that Thena, Druig and Makkari will be back and that Eros and Pip will be with them.

Black Knight, meanwhile, has comic connections to both the Avengers and the Eternals. His MCU future could be cosmic in scale or he could stay Earthbound, and either fate would make sense for his character. In interviews, Harington has said he doesn’t know what’s next for the character, but it appears that Black Knight will return in the MCU in a big way—whether that’s as part of a next generation of Avengers (perhaps alongside Shang-Chi, another newcomer) or fighting to protect Sersi in the vastness of space. 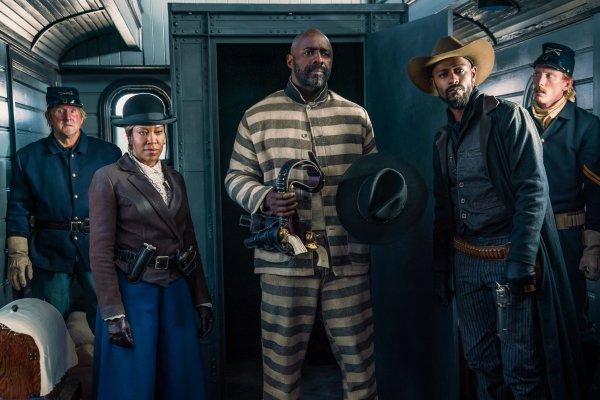 The Real Black Cowboys That Inspired Netflix's The Harder They Fall
Next Up: Editor's Pick