Here's Why Chloé Zhao's Oscars Win Was Censored in China

Nomadland director Chloé Zhao made history at the 2021 Oscars Sunday evening, becoming the first woman of color to win Best Director in the institution’s 93-year history. She is only the second woman ever to pick up the accolade, after Kathryn Bigelow’s win for The Hurt Locker in 2010.

In her acceptance speech, Zhao spoke of her memories growing up in China and recited part of a poem called the Three Character Classic in Mandarin. The excerpt translates as “people at birth are inherently good.”

The Oscars win, which preceded Nomadland’s wins for Best Picture and Best Actress (for Frances McDormand), follows a similar scoop at the Golden Globes for Zhao, who was born in Beijing, and became the first Asian woman to collect that award too. On the same night, Yuh-Jung Youn became the first Korean actor to win an Academy Award for her role in Minari. Both of these firsts are milestones, especially given Hollywood’s long history of fetishizing, stereotyping or excluding Asian women in front of the camera—in more than nine decades, the Academy Awards has recognized fewer than two dozen Asian performers in acting categories, and when it has done so, has rewarded roles that trade on harmful tropes or stereotypes.

While Zhao’s success has been praised as a major step forward in representation behind the camera this awards season, efforts to celebrate these firsts appear to have been dampened in China, where reports of censorship and media silence emerged Monday.

Why China is censoring Chloé Zhao and Nomadland

Chinese state media had initially referred to Zhao as “the pride of China” after her Best Director win at the Golden Globes last month. But an unearthed 2013 interview with the American publication Filmmaker Magazine, in which Zhao talked about growing up as a teenager in China and referred to it as “a place where there are lies everywhere,” soon sparked backlash and reports of censorship on social media sites, as well as critiques of Zhao from social media users, reported the New York Times.

Since its initial publication, the 2013 article has been “edited and condensed,” according to a note on Filmmaker Magazine’s website, with the widely-quoted portion referring to Zhao’s upbringing in China now omitted.

China’s two biggest state-run media outlets, CCTV and Xinhua, did not carry reports of Zhao’s win as of Monday afternoon, although the state-run paper Global Times and its editor Hu Xijin did tweet their congratulations to the director. “Chloe Zhao wins Best Director,” a hashtag on the popular microblogging site Weibo, was censored and inaccessible for users, the Associated Press reported Monday. The AP also reported that searches for “Nomadland” and “Zhao Ting” (Zhao’s name in Chinese) were banned on film app Douban, while a news article about Zhao’s win on the hugely popular Chinese networking app WeChat was deleted. According to Reuters, organizers of a live-stream event in Shanghai were unable to watch the ceremony as planned Monday morning, as the organizer said access to his Virtual Private Network was blocked for nearly two hours.

What has Chloé Zhao said about China?

“A lot of info I received when I was younger was not true, and I became very rebellious toward my family and my background. I went to England suddenly and relearned my history,” said Zhao in the original version of the 2013 Filmmaker Magazine article, according to an archived version still available online. “Studying political science in a liberal arts college was a way for me to figure out what is real. Arm yourself with information, and then challenge that too.”

In conversation with Moonlight director Barry Jenkins for Variety, Zhao spoke of growing up in China with a love of manga, saying that “we didn’t have movies when I was growing up, not the same way that you guys had access to films, but I did have just cabinets and cabinets of Japanese manga. I just devoured them.”

Zhao later moved to the U.S. and studied political science before enrolling in New York University’s Tisch School of the Arts’ graduate film program in 2010, where Spike Lee was her professor. Her first feature film, Songs My Brother Taught Me, was shot on a Native American reservation in South Dakota and released in 2015, and her follow-up The Rider, a contemporary Western drama, was released in 2017.

She has not forgotten her roots, however. In a recent profile in New York Magazine, Zhao spoke of her travels around the world and her Chinese heritage, describing northern Chinese people as “my own people” and of being “from China.” She has also spoken before about feeling like an outsider and how that interacts with her filmmaking, telling the Telegraph that “wherever I’ve gone in life, I’ve always felt like an outsider. So I’m naturally drawn towards other people who live on the periphery, or don’t live mainstream lifestyles.”

Zhao was praised on Twitter for speaking Mandarin in her acceptance speech. “If this win helps more people like me get to live their dreams, I’m so grateful,” Zhao told reporters backstage Sunday night, adding that her parents had always told her “who you are is enough, and who you are is your art.”

The Hong Kong station TVB, which has broadcast the Oscars every year since 1969, said it would not do so this year for commercial reasons. The decision fueled speculation that it was politically motivated and raised concerns around freedom of expression, exacerbated by the nomination of Do Not Split, a 35-minute film by Norweigan director Anders Hammery about the Hong Kong protests shortlisted for the Best Short Subject Documentary. The filmmakers of the winning documentary short Colette nodded to Hammer in their acceptance speech, saying that “the protesters in Hong Kong are not forgotten.”

China’s economic power and middle class have grown exponentially over the past two decades, and so has Beijing’s ability to dictate to foreign filmmakers eager to reach Chinese audiences. This year’s Oscars ceremony is not the first Hollywood cultural export that the Chinese government has censored or sought to control. As TIME reported in 2017, “pleasing Chinese audiences—and a Chinese central government hyperallergic to criticism—is now part of the Hollywood formula.”

A report last year by PEN America suggests that control has only increased, saying that filmmakers around the world are having to make difficult decisions about the “content, casting, plot, dialogue, and settings” of their movies to appease Chinese investors and gatekeepers. The report suggested that the 2016 Marvel film Dr. Strange whitewashed the Tibetan character The Ancient One (ultimately played by Tilda Swinton) “for fear of jeopardizing the film’s chances in China,” and that the Taiwanese flag was removed from the trailer for the Top Gun sequel, originally due in 2019 but postponed to 2021. The report also refers to Quentin Tarantino’s Once Upon a Time in Hollywood, which was pulled from China’s movie release schedule a week before release in 2019, reportedly due to the film’s unflattering depiction of Bruce Lee.

It’s unlikely that Nomadland, an independent film following modern-day nomads in America’s Midwest, would have found wide audiences in mainland China. But Zhao’s next feature, the Marvel blockbuster The Eternals, might pose more questions upon its release in November. 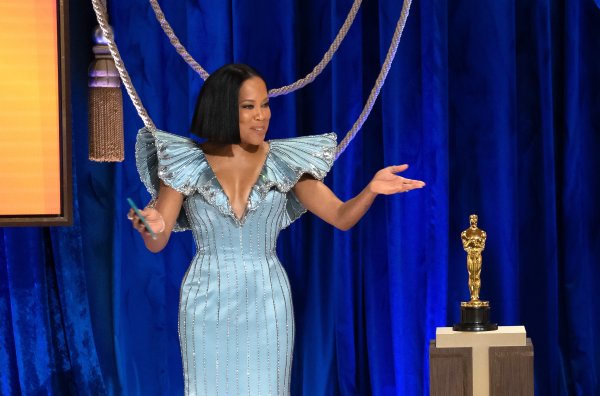 The Pandemic Oscars Were Shockingly Decent
Next Up: Editor's Pick