By the day in 1939 that Stanley graduated from DeWitt Clinton High, the Depression had finally bottomed out, and times in America were gradually getting better — though you’d have had a tough time convincing many a jobless family breadwinner of that. The severe economic downturn of 1937-38 was receding into the past, but the unemployment rate remained higher than it had been two years earlier. Franklin Roosevelt’s New Deal was looking pretty old.

And Stanley Lieber, all nearly 18 years’ worth of him, needed a full-time job after stints as a movie usher and office boy. It was in late 1940 that, as Stan writes in his autobiography: “My uncle, Robbie Solomon, told me they might be able to use someone at a publishing company where he worked. The idea of being involved in publishing definitely appealed to me.” He recalls getting in touch with the man who, his uncle told him, did the hiring: editor Joe Simon. “[Simon] took me on, and I began working as a gofer for eight dollars a week at this small company located in the McGraw-Hill Building.”

At another time, Stan had a slightly varying remembrance of his hiring:

The two remembrances are not, of course, mutually exclusive.

Stanley might well have seen such an ad in the newspaper — and known that his uncle had recently gone to work for that very outfit. As it turns out, Simon was less than fond of Stanley’s uncle. From Simon’s point of view, Solomon’s only duties were to “take messages” and “to make certain [that] cushions were on all the chairs, fluffed up and ready for Martin’s behind.” The middle-aged Solomon was, he felt, “a big mouth with lots of opinions on subjects about which he knew nothing.”

Then, one day at the office, “Uncle Robbie” — even staffers called him that, according to Simon — introduced the 26-year-old Timely editor to his real-life nephew, who was the son of his sister Celia and also just happened to be the cousin of Martin Goodman’s wife, Jean. The lad’s name was Stanley, and he was looking for a job. Any job.

Exactly who hired Stanley Lieber depends on whom you ask. Stan Lee remembers applying directly to Simon for the job. Simon, however, felt that, by the time he met the teenager, Solomon had already done an end-run around him by going straight to the publisher. “Martin wants you to just keep him out of the way. Put him to work,” Simon recalled Uncle Robbie telling him. Which Simon duly did. What was one more Goodman kinsman on the payroll?

For his part, Simon’s new assistant threw himself into his work with gusto. “I didn’t realize it at the time,” Stan Lee has said, “but I had embarked on my life’s career.”

At first, it hardly seemed like a career at all. Besides the cigar-smoking Simon and his partner, Jack Kirby, who seemed to be forever hunched over his drawing board with his own stogie clenched between his teeth, Timely’s comics staff was a real skeleton crew, even counting a few people who had broader magazine duties. As Stan Lee recalled in 2013: “Working in the office were Robbie Solomon, who was a minor exec, a woman bookkeeper (don’t remember her name)… a male bookkeeper named Milton Schiffman… Moe Siegel, a relative of Martin’s who did something in the business dep’t, and Frank Torpey, who was Martin’s ‘lucky charm,’ as Martin put it.” According to Simon, Torpey was the circulation director, whose job it was to decide the print runs of the various publications — with Goodman’s advice and consent, naturally.

None of the above-named folks besides Simon and Kirby, it should be noted, were writers or artists. The art and scripts for most of Timely’s comics were provided either by freelancers or by the Funnies, Inc., comic shop, which rented its own space elsewhere; both groups would simply deliver their finished work to the McGraw-Hill Building. “As far as I remember,” Stan says, the writers and artists (excluding Simon and Kirby) “all worked at home, except for some times when they’d finish up a job in the office.”

Stan has recalled Timely as publishing only “about three or four magazines a month” when he went to work there. That’s a spot-on recollection. Besides the monthly Marvel Mystery Comics and Captain America Comics — the latter a very recent addition when Stanley walked in the door, and probably not yet on sale at newsstands — there were Daring Mystery Comics (already demoted from bimonthly to quarterly status) and Mystic Comics (more or less bimonthly). In addition, the new quarterly Human Torch title had just debuted, having replaced a one-issue flop titled Red Raven Comics… and the first quarterly issue of Sub-Mariner was in the pipeline. The Torch and Sub-Mariner comics were packaged by Jacquet’s Funnies, Inc. Of course, Goodman’s Timely Publications also put out several pulp magazines, but there was little connection between the pulps and the comics.

According to Stan, as Simon’s assistant he “did a little of everything. I went down and got people their lunches and I filled the inkwells and I did some proofreading and I did some copywriting.” Joe Simon’s take on Stanley’s gofer days: “Mostly we had Stan erasing the pencils off the inked artwork and going out for coffee. He followed us around, we took him to lunch, and he tried to be friends with us. When he didn’t have anything to do, he would sit in a corner of the art department and play his little flute or piccolo, whatever it was, driving Kirby nuts. Jack would yell at him to shut up.” Simon and Kirby let him hang out with them when they played billiards or went bowling. Oh, and just for the record: The musical instrument in question was technically an ocarina.

Simon said that, after just one week on the job, Stanley came to him and asked for a promotion. The first editor of Timely Comics quotes his young assistant’s reasoning: He said he deserved the promotion because “I know everything.”

This may well have been the occasion on which, as Simon described it decades later: “One day I made his life.” He invited the teenager to try his hand at writing one of the two-page “text stories” that were a fixture in virtually all comicbooks in those days. (They had to be. The U.S. Postal Service, in its infinite wisdom, had decreed that any magazine mailed out second class, as comicbook subscription copies were, had to contain at least two pages of text… actual typeset prose. Words hand-lettered in dialogue balloons didn’t count.) All the pros knew that no one actually read those stories. But that didn’t stop Stanley from giving those text pages his all. “To Stan,” Simon wrote, “they were the Great American Novel.”

Stanley quickly produced a short prose tale with the ungainly title “Captain America Foils the Traitor’s Revenge.” It featured a byline: “by Stan Lee.” As Simon recalled the ensuing exchange:

The above exchange may be apocryphal, but that text story was printed in Captain America Comics No. 3 (cover-dated May 1941, but on sale no later than March). It marked the official writing debut of “Stan Lee,” a pseudonym that would one day become Stanley Lieber’s legal name and would eventually be known to many people who wouldn’t have recognized the names of other prominent comics creators, not even “Siegel and Shuster” or Bob Kane — or “Simon and Kirby.” “I changed it,” Stan has said, “because I felt someday I’d be writing the Great American Novel and I didn’t want to use my real name on these silly little comics.” 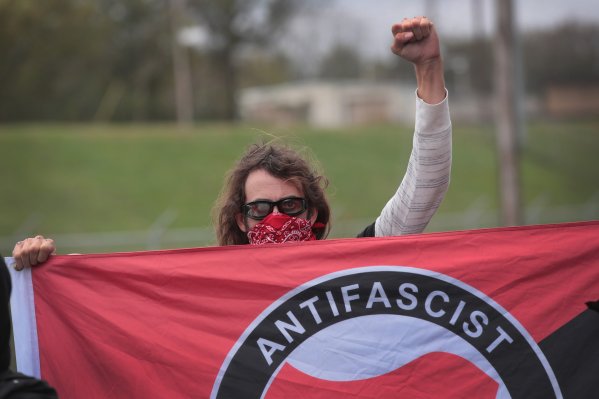 What the Artist Behind a Comics-Style History of Anti-Fascist Resistance Thinks You Should Know About Antifa
Next Up: Editor's Pick