You've Seen Avengers: Endgame and Spider-Man: Far From Home. Here's What Happens Next in the Marvel Cinematic Universe

Avengers: Endgame marked the end of an era — and the beginning of a new one. Though many of the movie’s characters died or retired — again, spoiler alert! — others earned new titles or set off on missions across the universe. The highly anticipated sequel also set up several upcoming Marvel movies, and Marvel Studios head Kevin Feige confirmed at 2019 San Diego Comic-Con that Phase 4 of the Marvel Cinematic Universe will include at least eight films and five TV shows released over the next several years.

Favorites like Captain Marvel and Thor will get sequels, and newcomers like Shang-Chi will get debuts. Feige also teased that the Fantastic Four and Blade will get reboots. And in between movies, stories centering on fans’ favorite movie characters will continue on Disney’s streaming service, Disney+, launching in November. (Two new Marvel live-action series, unrelated to Avengers: Endgame, will premiere on Hulu in 2020)

Here are all the movies and TV shows (on Disney+ and Hulu) coming to the Marvel Cinematic Universe now that Avengers: Endgame is finally out.

No. Well, kind of. Avengers: Endgame is the last movie in Marvel’s Phase Three, which launched in 2016 with Captain America: Civil War. The film wraps up the franchise’s main storylines while promoting other secondary and tertiary characters to center stage in future films and TV shows.

What Marvel movies will come after Avengers: Endgame?

Marvel initially remained tight-lipped about what movies would premiere after Avengers: Endgame. There’s probably a good reason for that: after all, the identities of those who perished were closely held until Endgame premiered. Only the date of the next Spider-Man sequel, Spider-Man: Far From Home, was on the calendar. Beyond that, all we knew for certain was that Marvel is planning three movies for 2020, three movies for 2021 and three movies for 2022. But after the Marvel panel at 2019 San Diego Comic-Con, fans finally have a good idea about what’s coming up. Here’s what’s in the works.

Black Widow is getting her own standalone movie, directed by Cate Shortland (Lore). Scarlett Johansson will reprise her role from the Avengers films, with Florence Pugh, Rachel Weisz and David Horbour also appearing. The film will take place shortly after the events of Captain America: Civil War, and Black Widow will face off against the villain Taskmaster.

This will be Marvel’s first feature film with an Asian lead. Kim’s Convenience star Simu Li will star as the martial arts master and Awkwafina will also appear in the film. Shang-Chi will fight the Mandarin, a character who seemingly appeared in Iron Man 3 but was revealed to be an actor impersonating the villain. At Comic-Con Marvel head Kevin Feige promised this Mandarin will be the real deal.

Angelina Jolie attends the premiere of 'First they Killed my Father' at the Toronto International Film Festival in Toronto, Ontario on September 11, 2017.
VALERIE MACON—AFP/Getty Images

Chloe Zhao (Nomadland) will direct a movie about a race of superhumans who call themselves the Eternals. Angelina Jolie, Kumail Nanjani, Richard Madden, Brian Tyree Henry, Kit Harington and Salma Hayek will all star in the film.

Spider-Man 3 may be the key to the future of the Marvel Cinematic Universe following the epic Avengers narrative. Characters from past Spider-Man iterations starring Tobey Maguire and Andrew Garfield, including Alfred Molina’s Doc Ock and Jamie Foxx’s Electro, are set to appear in the new Tom Holland Spider-Man film. So is Benedict Cumberbatch’s Doctor Strange.

Most likely that means that means that the new Spider-Man movie will deal with the multiverse, a live action version of the parallel universes shown in Spider-Man: Into the Spiderverse. Opening up parallel dimensions could allow the MCU to introduce characters like the X-Men and Fantastic Four (more on them later).

Director Taika Waititi, who helmed the critically-acclaimed Thor: Ragnarok, is returning to direct a fourth Thor movie and announced at Comic-Con that this film would feature a female Thor: Jane Foster (Natalie Portman). A woman has taken up Thor’s hammer in the comic books, and now she will onscreen too. Chris Hemsworth will reprise his role as the former God of Thunder, and Tessa Thompson will return as Valkyrie, the ruler of Asgard and Marvel’s first openly queer superhero. Christian Bale has signed on to play the villain, Gorr the God Butcher.

Doctor Strange and the Multiverse of Madness (March 25, 2022)

Benedict Cumberbatch and Benedict Wong will return for a sequel, and Elizabeth Olsen, who has played Scarlet Witch in several of the Avengers films, will join them in their exploration of the multiverse (many parallel universes that could, potentially, mean the introduction of many more superheroes). The movie will likely tie into the events of WandaVision, airing on Disney+, and Spider-Man 3.

In an exciting turn of events, Sam Raimi, who directed the Tobey Maguire Spider-Man films, is set to direct.

Brie Larson’s Captain Marvel is getting a sequel film helmed by Nia DaCosta, the director of the upcoming Candyman horror movie from Jordan Peele’s Monkey Paw Productions. Marvel has also announced that Iman Vellani, the star of the Ms. Marvel series on Disney+ will join the cast. In the comics Ms. Marvel idolizes Captain Marvel, so it’s likely they will work together.

The critically acclaimed Black Panther became the first superhero movie to ever be nominated for Best Picture. Marvel quickly ordered a sequel, originally slated for May 6, 2022. But in August, star Chadwick Boseman passed away after a battle with cancer. Marvel has announced that it will move forward with the franchise with director Ryan Coogler, but they will not recast the part of T’Challa that had been played by Boseman.

BEVERLY HILLS, CALIFORNIA - JANUARY 06: Best Actor in a Supporting Role in any Motion Picture for 'The Green Book' winner Mahershala Ali poses in the press room during the 75th Annual Golden Globe Awards at The Beverly Hilton Hotel on January 06, 2019 in Beverly Hills, California. (Photo by Daniele Venturelli/WireImage)
Daniele Venturelli—WireImage

Oscar-winner Mahershala Ali will star in a rebooted Blade movie as the titular vampire.

Marvel head Kevin Feige confirmed at San Diego Comic-Con that Marvel Studios plans to reboot the Fantastic Four franchise. He didn’t announce any details about when the movie would be released or who might be in the cast. But in December Disney announced that Jon Watts, who directed Spider-Man: Homecoming and Spider-Man: Far From Home will helm this movie.

Guardians of the Galaxy Vol. 3 (TBD)

Guardians fans will have to wait a couple years before they see Groot and Rocket in action again: James Gunn, who has helmed the last two Guardians movies, was fired in 2018 after offensive old tweets resurfaced. He was rehired by Marvel in March 2019. In the interim, Gunn agreed to write and direct the forthcoming Suicide Squad 2, which means he can’t begin production on Guardians 3 until 2021. Hopefully the wait will be worth it: Thor joins the Guardians at the end of Endgame, which means he could be onboard for the new movie.

Ant-Man and the Wasp: Quantumania

Ant-Man and the Wasp are apparently going to spend a little more time in the Quantum Realm. Ant-Man got stuck in the Quantum Realm between the events of Avengers: Infinity War and Avengers: Endgame but with the help of Iron Man eventually figured out how to harness the power of the Quantum Realm to essentially travel through time. It’s probably safe to say that this, too, will be a time travel movie.

What Marvel TV shows will come after Avengers: Endgame?

Elizabeth Olsen and Paul Bettany will star as Wanda Maximoff (Scarlet Witch) and Vision on a Disney+ series. The show looks to be a delusion of either Wanda or Vision as it hops around in time, cribbing from various family TV sitcom tropes along the way. It looks weird and delightful and exactly like what we need from a Disney+ MCU series.

Steve Rogers passed the Captain America mantle to Sam Wilson (a.k.a. Falcon) at the end of Avengers: Endgame, so Falcon & Winter Soldier could take on the more spoilery title Captain America & Winter Soldier. (The show, which will air on Disney+, cannot be set before the events of Endgame, since Bucky was either evil, in hiding or in a coma the entire time that Sam was Falcon.) At Comic-Con, it was revealed that Monica Rambeau will be played in the “present” by Teyonah Parris.

Rick and Morty writer Michael Waldron will serve as showrunner for this series about everyone’s favorite trickster god on Disney+. Thanos killed the 2018 version of Loki in Avengers: Infinity War. But when the Avengers travel back in time to 2012 in Avengers: Endgame, that version of Loki steals the Tesseract and escapes. The show will follow this 2012 Loki across time and space.

The first animated series in the Marvel Cinematic Universe will ask what if things had gone differently for our favorite heroes and villains? Questions like: What if Loki had defeated New York or what if someone Peggy Carter had been injected with the super-solider serum instead of Captain America? Much of the MCU live-action cast will voice their characters in episodes, and Jeffrey Wright will host the show as the Watcher, literally watching over these scenarios.

Kamala Khan, aka Ms. Marvel, is the first Muslim superhero to enter the MCU. The Pakistani American teenager has shapeshifting abilities and worships Captain Marvel (which means she could appear alongside Brie Larson in a Captain Marvel sequel on the big screen).

Hawkeye was going back to retirement at the end of Endgame — but not for long. A Hawkeye series on Disney+ in which Jeremy Renner’s Clint Barton trains his protege Kate Bishop played by Hailee Steinfeld is in the works.

Orphan Black’s Titiana Maslany stars as Jennifer Walters, Bruce Banner’s cousin who gains his Hulk powers after receiving a blood transfusion from him. She is a lawyer by day and crimefighter by night.

All of the Guardians of the Galaxy will gather together on Disney+ for what is sure to be a wacky and fun holiday special, directed by James Gunn.

Moon Knight follows a former criminal who evolves multiple personalities and becomes “the First of Kohnshu.”

Groot, voiced by Vin Diesel in Guardians Of The Galaxy Vol. 2.
©Marvel Studios

The adorable trisyllabic tree, voiced by Vin Diesel, will star in a series of shorts on the streaming service.

Don Cheadle as Rhodie, a.k.a. War Machine, gets his own spinoff show. Now that Tony Stark is gone, Rhodie will have to don the armor on his own when a bad guy gets his hands on Stark’s technology.

Marvel is adapting yet another recent storyline from the comic books. This show will center on Riri Williams played by Dominique Thorne(If Beale Street Could Talk). Riri is an inventor who creates an Iron Man suit as powerful as Tony ever designed and dubs herself Iron Heart.

Samuel L. Jackson will star as Agent Fury alongside Ben Mendelsohn’s alien Talos from Captain Marvel as they contend with a secret invasion of shapeshifting Skrulls on earth. 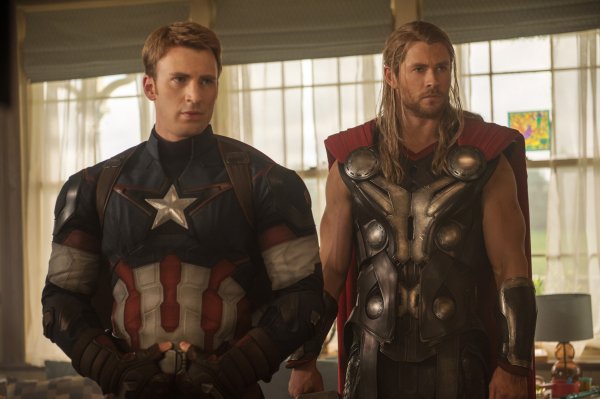 Turns Out Avengers: Age of Ultron Had Major Endgame Spoilers All Along
Next Up: Editor's Pick