How the Eternals Fit Into the Marvel Cinematic Universe

The Marvel Cinematic Universe continues to expand, as this month sees the release of Eternals, the 26th entry in the massive franchise, directed by Oscar-winning director Chloé Zhao. As with the previous MCU movie, September’s Shang-Chi and the Legend of the Ten Rings, Eternals focuses on heroes who haven’t been a part of the film universe until now, and as such, casual moviegoers might not know who the titular Eternals are. (Heck, the average comics reader might not be super familiar with them.)

In preparation for Eternals’ Nov. 5 premiere, here’s everything you need to know about the Eternals and how these characters will fit into the MCU.

The Eternals—a group of immortal beings tasked with protecting and nurturing the human race—were created by the legendary comics writer and artist Jack Kirby in 1976. Kirby, who co-created Captain America, The Fantastic Four and many more iconic characters, left Marvel Comics for rival DC Comics in 1970. While there, he created the New Gods, a cosmic, high-concept series of characters who count the Justice League baddie Darkseid among their ranks. When Kirby returned to Marvel five years later, he still wanted to explore some of the mythical sci-fi ideas he had embraced with DC’s New Gods. This desire yielded The Eternals #1, which hit shelves in July of 1976.

In this original comic, the Eternals were a type of near-immortal, humanlike being with diverse powers who were created by Celestials, extremely powerful, beyond ancient beings. The Celestials experimented on what would become humanity ages ago, seeding the ability for normal humans to develop mutations (à la the X-Men) or other superpowers and also creating an evil sort of being alongside the Eternals: The Deviants. It was the Eternals’ mission to defend humanity from the Deviants.

There are a lot of Eternals in the comics—more than feature in the movie—and many of them, like Ikarus, Sersi, and Thena (who are played in the film by Richard Madden, Gemma Chan and Angelina Jolie, respectively) have names that resemble gods or other characters from Greek mythology. These naming similarities are explained due to the Eternals’ god-like status and presence throughout prehistory, as they were mistaken for Greek gods or otherwise inspired mythic characters.

The specifics of the Eternals’ story has changed and been made more complex over the decades, and the MCU version isn’t necessarily exactly like Kirby’s original pitch (there’s no evidence yet that Celestials are going to be the ones introducing Mutants to the MCU), but the general gist is the same. The Eternals have appeared throughout the years in several different Marvel comic series, starring in several of their own and making appearances in other comics or big crossover events. A new, ongoing Eternals comic began this January to general critical acclaim, but the Zhao-directed movie is by far their most high-profile appearance.

How do the Eternals fit into the MCU?

As the trailers and the very proper noun-heavy opening text for the film reveal, the Eternals have roughly the same origin in the Marvel Cinematic Universe as they do in the comics. They were created by Celestials to defend humanity from the Deviants and help the species grow and develop.

While neither the Eternals nor the Deviants have appeared in the MCU before, we have seen quite a bit of the Celestials. In Guardians of the Galaxy, we see footage of a towering Celestial wielding an Infinity Stone, and the space mining colony the Guardians visit, called Knowhere, is built in the severed head of a dead Celestial. In Guardians of the Galaxy vol. 2, we learn that Ego the Living Planet (Kurt Russell) is a Celestial and that Star-Lord (Chris Pratt) is half-Celestial by extension. (However, Ego is just your average sentient planet in the comics and not a Celestial, and perhaps as a result, the movie version looks and acts a little bit different from most of the other Celestials in the MCU.) In any case, Eternals will explain what the Celestials’ whole deal is as a nigh-omnipotent race of giant cosmic space aliens in a way that earlier MCU films only touched on.

In the continuity of the MCU, the Eternals have been on Earth since the Stone Age. Somebody who has watched the 25 movies prior to Eternals might reasonably ask, “Where the hell have they been?” Indeed, in the movie, Dane Whiteman (a regular human played by Game of Thrones star Kit Harington) even asks Sersi why the Eternals didn’t intervene when Thanos (Josh Brolin) destroyed half of all life in the galaxy. The answer? The Eternals were instructed by the Celestials not to interfere with any human conflict unless it involved the Deviants. As a result, they stood idly by during the Infinity War, the events of Age of Ultron, Doctor Strange, Thor 2: The Dark World, and any number of other potentially world-ending incidents where you’d think it would’ve made sense for the Eternals to lift a finger.

The Eternals’ non-intervention mandate—which is more of a movie thing than a comics one—is convenient. The real reason why the Eternals didn’t help in any of the earlier movies is because Marvel Studios hadn’t made Eternals and so they hadn’t been cast and functionally didn’t exist in the fiction. Plus, even when reading comics, you kind of need to just willingly allow for unnecessary crossovers. (Why doesn’t Superman simply help Batman catch the Joker as it would be easy for him to do so? Because this is a Batman story, and if Superman showed up and solved every problem then there wouldn’t be any story at all.)

However, once you just accept that the Eternals simply didn’t help in any earlier instance in the MCU despite being there the whole time, the movie works just fine. In a way, it’s one of the easier movies for an MCU newbie to go into, as other than some one-off lines of dialogue and asides, there really isn’t any MCU backstory the average viewer will need to know about. Eternals largely stands alone—its narrative spans millennia and contains a rich history, just one that doesn’t really retread any of the ground the preview MCU films had already covered.

While Eternals doesn’t have many ties to the MCU’s past, it does set up what’s coming next in the franchise in some big ways. To say more ahead of its release would be a spoiler, however.

Who are the Eternals?

Having established the Eternals’ comic history and how that’s been adapted to fit in the MCU, it’s worth spending a little time introducing the actual individual Eternals—though perhaps not too much time, as the point of the movie is letting the audience learn who these characters are.

Sersi (Gemma Chan) is the ostensible protagonist of Eternals, even with its ensemble cast. Chan, who had a small role as a side villain in Captain Marvel, returns to the MCU as an entirely unrelated character. All the Eternals have a specific superpower, and Sersi’s is the ability to manipulate molecules and atoms, transforming inanimate objects into other materials with a touch. In the past, Sersi was in a relationship with the most powerful Eternal, Ikarus (Richard Madden), who has the ability to fly and shoot laser beams out of his eyes, just like Superman.

The Eternals are led by Ajak (Salma Hayek). Ajak is one of a handful of characters whose gender and/or race were changed from the original comics, where most of the Eternals were white guys. She has the power to heal, and she’s the one who communicates with their Celestial master.

Other Eternals include Kingo (Kumail Nanjiani), a charming, somewhat swashbuckling Eternal who can fire energy blasts from his hands, finger-guns style. Phastos (Brian Tyree Henry) is incredibly inventive, able to create advanced technology, some of which he gifts to the nascent human race to aid in their development. Sprite (Lia McHugh) can create complex, life-like illusions. She is unique among the Eternals because she has the appearance of a child, though seeing as she’s an immortal being, she never physically ages or grows up. Makkari (Lauren Ridloff) has super-speed and is deaf, as is the actor who plays her.

Druig (Barry Keoghan) can control people’s minds while Gilgamesh (Don Lee) has incredibly super-powered punches. Finally, there’s Thena (Angelina Jolie), a gifted warrior who can create any weapon she needs at any given time out of cosmic energy.

Harington’s character, Dane Whiteman, is a normal human whom Sersi is dating when the movie begins, but savvy comics readers have noted that he shares his name with the Marvel hero Black Knight, an observation that could bear hints as to his future in the MCU.

It’s a lot of new characters all at once, along with a lot of new concepts that push the MCU in a new direction. Perhaps that’s why Eternals is 2 hours and 37 minutes long—ample time to give the audience a good sense of who these characters are and what their place in the Marvel Cinematic Universe will be going forward.

James Grebey is an entertainment journalist who edits features for SYFY WIRE, writes on occasion for Vulture, Polygon, GQ, Decider and more, and tweets dumb photoshopped jokes on Twitter, where he’s @jgrebes. 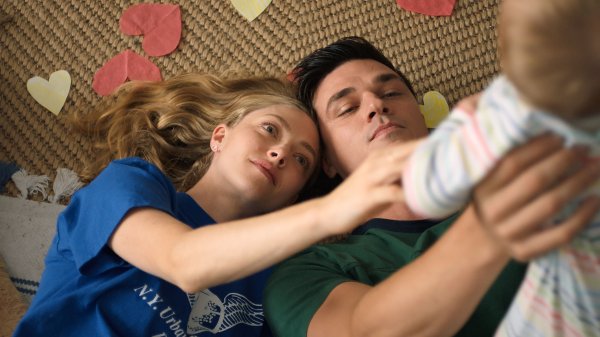 Amanda Seyfried Is Heartbreaking in A Mouthful of Air, a Harrowing Story About Postpartum Depression
Next Up: Editor's Pick