The Best, Worst and Strangest Moments of the 2021 Oscars

For the second time in five years, the Oscars ended in mass confusion. When Joaquin Phoenix showed up to present the award for Best Actor, it was widely expected to go to the late Chadwick Boseman for his explosive role in Ma Rainey’s Black Bottom. Instead, it went to The Father’s Anthony Hopkins—who wasn’t in attendance. The camera then cut to a visibly disappointed Questlove, manning his DJ booth, who gave a short speech, and then it was over.

Twitter immediately alighted with alarm and jokes. “That’s the worst TV ending since ‘Game of Thrones,’” wrote Matt Brennan, the TV editor of the LA Times.

It was a strange cap on a well-composed but mostly sleepy show that served as a hybrid of the past pandemic year and the in-person future. Nomadland took home three of the top prizes, including Best Picture, Best Director (for Chloé Zhao) and Best Actress (for Frances McDormand). The rest of the awards were spread fairly evenly among the other main contenders, including Minari, Sound of Metal, Mank and The Father. Here are the best and worst moments of the night.

Over the Oscars’ three-hour runtime, little matched the dynamism or visual punch of the show’s first two minutes, in which Regina King swaggered down a long hallway in a knockout baby blue butterfly gown as Oscars producer Steven Soderbergh’s Ocean’s-influenced title sequence rolled. And if anyone hoped to watch the Oscars for escapism, King offered them no such option: “If things had gone differently this past week in Minneapolis, I might have traded in my heels for marching boots,” she said, referring to the conviction of Derek Chauvin for the murder of George Floyd. “I know many of you want to reach for your remote when you feel Hollywood is preaching to you, but as the mother of a Black son who fears for his safety, no fame or fortune changes that.”

While King’s speech was powerful, it also set the tone for a seriously unfunny night. Going hostless doesn’t have to mean omitting all of the jokes: last year, producers brought up a parade of A-List comedians to inject levity and break up the monotony of speeches. Obviously, the Oscars have an uneven record when it comes to creating top tier comedy, but at least they were trying to create a fun atmosphere. This year, the groan-inducing punchlines during nominee presentations were instead replaced by earnest vignettes about the artists’ origin stories and Love For Cinema. While these tidbits were humanizing and an interesting change of pace, they soon wore out their welcome, turning into a slew of interchangeable information dumps. In fact, there was only one comedic bit in the entire show: a music trivia game, led by Lil Rel Howery (more on him later), that somehow devolved into Glenn Close dancing to the 1988 E.U. hit Da Butt. That the moment was far and away the funniest of the show speaks volumes to both Close’s many talents and her lack of competition.

If the Oscars ever go back to having a host, Lil Rel Howery should be near the top of the list. The comedian and actor—who previously hosted MTV’s Acting Out and is set to host NBC’s game show Small Fortune next month—lent a shaggy, laid-back charm to an Oscars pre-show typically filled with excruciatingly strained red carpet interviews. His fellow stars, from Questlove to Andra Day, looked completely at ease beside him; he got Angela Bassett to both bust a move and open up about what she missed about Chadwick Boseman. He even handled his small mistakes—like when Zhao had to gently nudge him to the fact that they were rolling—with easy aplomb.

Meanwhile, the musical trivia he led with Questlove during the main showproved to be the most entertaining stretch of the night. Howery’s questioning of Andra Day and Close elicited the night’s only bleeped profanities—much to the shock and delight of the small crowd—as well as the aforementioned “Glenn Close Da Butt” moment that will live on in Oscars lore.

Daniel Kaluuya accepts the Oscar for Actor in a Supporting Role for 'Judas and the Black Messiah' during the 93rd Annual Academy Awards on April 25, 2021
A.M.P.A.S. via Getty Images—2021 A.M.P.A.S.

Oscar speeches can be notoriously long-winded and dull. This year, producer Soderbergh, instead of trying to corral them like every previous showrunner, instead took the opposite tack, telling the winners to stretch out: “We’ve encouraged them to tell a story, and to say something personal,” he told Reuters this month.

The counterintuitive approach sometimes worked: winners, unburdened from rapidly blurting a laundry list of names, told personal stories, shared life philosophies and overall made an effort to be entertaining as opposed to just dutiful. (Frances McDormand delivered hers short and sweet, as always.) But the best of the bunch came from Daniel Kaluuya, who started off a bit shaky—literally—as he accepted the award for Best Supporting Actor for his role as Black Panther Party Chairman Fred Hampton in Judas and the Black Messiah. But Kaluuya steadied himself and gained strength to create a poignant and far-ranging speech. He talked about how Chairman Fred and the rest of the Black Panthers “showed me how to love myself” and challenged everyone in the room to continue their struggle. And then, in marveling at the wonders of life, he blurted out, “My mum and dad, they had sex!” while the camera turned on his mortified mother in London, making for one of the best moments of the night:

Molly Sandén gave a rousing performance of the nominated song "Husavik"—if only the show's producers had actually aired it during the show rather than before it
A.M.P.A.S. via Getty Images—2021 A.M.P.A.S.

One of the main reasons that the 2021 Grammys were largely entertaining, despite the strained circumstances, is that watching great musicians play music live is foolproof. In Oscars past, musical acts from Celine Dion to Shirley Bassey to Three 6 Mafia have provided emotional resonance and variation to staid shows. This year, musical performances from the powerful nominees, including Leslie Odom Jr. and H.E.R., could have been the perfect antidote to the muted ambiance of Union Station. But for some reason, Oscar producers decided to cut the musical performances from the main show entirely, booting them to the pre-show instead. There, the musicians shined: Molly Sandén belted “Husavik” straight from the song’s titular Icelandic town as fireworks exploded overhead; H.E.R. led an airtight funk band dressed in Black Panther garb through the defiantly joyful “Fight For You,” as images of Fred Hampton were projected below her feet. Of course, the Oscars would have been even more overlong than they were with the music kept in—but benching your best talent is never a good idea.

Just like in Minari, Yuh-Jung Youn’s onscreen arrival immediately sent a jolt of wicked charisma and unpredictability into a monotonous landscape. By winning Best Supporting Actress, Youn became the first Korean actor to win an Oscar—and she made sure to make the most of her historic moment. “Mr. Brad Pitt, finally, nice to meet you,” she crowed to her presenter. “Where were you while we were filming in Tulsa?” (Pitt’s Plan B Entertainment produced Minari.) She paid homage to Glenn Close (“How can I win [over] Glenn Close!“) and made Amanda Seyfried swoon by telling her and the other nominated actresses, “We cannot compete [with] each other.” But right after, she admitted to them, with a chuckle, “I’m luckier than you.”

In backstage interviews, she maintained her energy and startling honesty, saying the first few days on set for Minari were a “terrible thing.” And when asked about her interaction with Brad Pitt and what he smelled like, Yoon retorted with a laugh: “”I didn’t smell him. I’m not dog.”

When Rita Moreno stepped up to the podium to announce Best Picture, many online were confused: Best Actor and Actress hadn’t been awarded yet. Others, however, suspected that the reason for the switch-up would be to end the show with a tribute to the late Chadwick Boseman. Most prognosticators had named him a virtual lock to win Best Actor for Ma Rainey’s Black Bottom. Instead, Hopkins’ name was read as the winner—and given that Hopkins was absent, the show ended on a stunning anti-climax. They may not have gotten the envelopes switched this time—but the confusion and dismay created by the sequence of events matched that of 2017’s debacle. 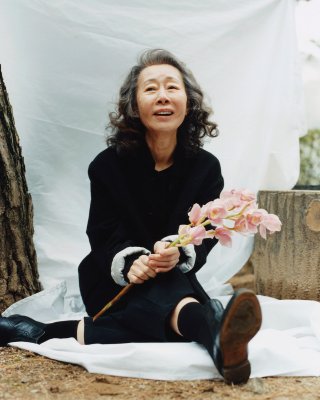 The Crucial History Behind Yuh-Jung Youn's Oscar Win
Next Up: Editor's Pick