Angela Bassett Refuses to Let Hollywood Put Her in a Box

Angela Bassett doesn’t like to talk about herself. She does like to talk about the characters she has played—or, more specifically, inhabited. She swivels her shoulders as she recalls her Oscar-nominated role as Tina Turner in What’s Love Got to Do With It.

“Tina was Beyoncé before Beyoncé,” Bassett says. “Those legs, that power, that sensuality, that undeniable talent.” Then she shrinks her body while maintaining steady eye contact as she transforms into the civil rights icon from The Rosa Parks Story.

Finally she leans back and settles into the couch at a hip Manhattan bar that serves smoke-emitting cocktails in beakers. They’re drinks designed to attract attention, but Bassett doesn’t need a dramatic prop to draw an audience. (She’ll have water, thank you.)

Few actors carry themselves with such confidence. She speaks softly but firmly. You have to lean in to hear her, a trick she uses to intimidate Tom Cruise’s secret agent Ethan Hunt while playing the director of the CIA in her latest film, Mission: Impossible—Fallout (out now). It might feel intimate if she didn’t fill the room with such massive gestures as she describes her long career.

From 1992 to 1993, Bassett played Jackson 5 matriarch Katherine Jackson, Malcolm X’s wife Betty Shabazz and Tina Turner, all in succession. She finished the ’90s playing women who found inner strength after heartbreak—whether by burning a cheating husband’s car in Waiting to Exhale or dancing her way into a new relationship in How Stella Got Her Groove Back.

During this time, Bassett achieved something rare: superstar status when meaningful roles for black women were scarce. “What does Hollywood want black women to be?” Hilton Als wrote in a 1996 profile of Bassett in the New Yorker. “Angela Bassett is a potential answer.”

Bassett was particular about her roles and through conviction and a little luck wound up embodying a series of powerful, if wronged, women. As for the effect those choices had on pop culture at large, “that’s something for cinema classes to study,” Bassett says. “It’s an interesting proposition. But that’s not for me to dissect. That’s just far too much self-absorption.”

Eventually, the same thing happened to Bassett that happens to many women as they age: Hollywood relegated her to supporting roles. Then Ryan Murphy came along. The prolific television writer has formed a coterie of female actors over 40. He has created juicy roles—often witches, murderers or divas who subvert stereotypes—for the likes of Jessica Lange, Kathy Bates and Connie Britton.

Bassett signed on to portray real-life 1800s voodoo practitioner Marie Laveau in American Horror Story: Coven. She went on to appear in four seasons of his anthology series, earning two Emmy nominations in the process. She trusted Murphy so much that she signed on to star in another of his series, 9-1-1, before it had a script. And in just one season, 9-1-1 has become one of the most-watched shows on television.

After Murphy came another Ryan. This time it was Coogler, a young director with just two films under his belt. Bassett added gravitas to his Marvel film, Black Panther, as Queen Ramonda, the mother of the titular superhero. “Ryan Coogler was a warrior. He didn’t sleep,” she says of filming. “And we were all there, warriors with him: whatever you need, because we all knew it was immense and important and a first. We knew it was about more than just us.”

Bassett and her husband, actor Courtney B. Vance, usually don’t let their kids attend premieres. They made an exception for Black Panther because they wanted their children to see themselves as “potential panthers.”

The trick to lasting in Hollywood, Bassett has found, is to keep good company. She chooses to work with emerging artists who—shortly after she films with them—are hailed as geniuses redefining the industry. Murphy tells the stories of older women and LGBTQ characters. Coogler made history with a box-office smash starring a primarily black cast.

In between, Bassett worked with Lena Waithe on what became an Emmy-winning episode of Netflix’s Master of None, based on Waithe’s own coming-out story. Bassett is an outstanding actor. She may be an even better talent scout.

Bassett’s mother raised her to be exceptional. As Bassett grew up, first in Harlem and then in St. Petersburg, Fla., Betty Jane Bassett, a social worker, would tell her, “I don’t have average children.” Bassett mimes her response as a teenager to this mantra: she pouts, then smiles and then furrows her brow again, unsure whether to feel complimented or scolded. “Later on, of course, she said she didn’t remember saying that,” says Bassett.

Bassett attended college at Yale and remained on campus to get her master’s degree when she snagged a coveted spot at the Yale Drama School. “We called it Yale Trauma School,” says Bassett. Between classes, running lines and building sets, she didn’t have time to eat, let alone sleep.

“You subsisted on a bagel, coffee and cigarettes if you smoked them,” she says. “They were breaking you down to build you back up. If you could hang on for that build-back-up-again part, it was a great experience. Some folks couldn’t.”

But Bassett would not be deterred. Even as a young actor with few options, she refused to be pigeonholed. After appearing in a series of historical dramas, she would seek out a lighter fictional role. When she felt like she was being offered hackneyed or demeaning parts in film, she would return to the stage. “We tend to put people in boxes because of gender, because of color, because of age, because of whatever,” she says. “But I like to surprise people.”

At 59, the boxes that the industry wants to put Bassett in have “gotten bigger.” But they still exist. “I haven’t auditioned since What’s Love,” she says. She pauses. “That’s not true. I auditioned for the play The Mountaintop, because the character was a 22-year-old, and I was 51 at the time. I had to go into the room and show them this transformation. I had the role before I got back to my hotel room.”

Today she looks for scripts that portray aspects of women’s lives that rarely get airtime. With Master of None, she says, “I had never seen that type of conversation between a black lesbian character and her mother.” She was intrigued by Murphy’s concept for her character on 9-1-1, a police officer who has to navigate her personal life when her husband comes out as gay.

And she raves about the roles for women in Black Panther. “You never know how super a superhero movie is actually going to be,” she says, raising her eyebrows. But each Wakandan woman had her own personality and motivation: “The warrior, the genius, the wise counselor, the love interest who doesn’t have time for love because she’s got social work to do. For male writers, you have to love women to make four distinctive, powerful women’s voices come alive and not sound like just one person divvied up.”

Bassett has been picky, but lately she’s also been prolific. This year alone she’ll star in three movies and a television series. It’s a sign of changing times and better material. And while young audiences may not know Bassett as Tina or Stella, they now know her as a queen, a cop and the director of the CIA. Not bad work if you can get it. 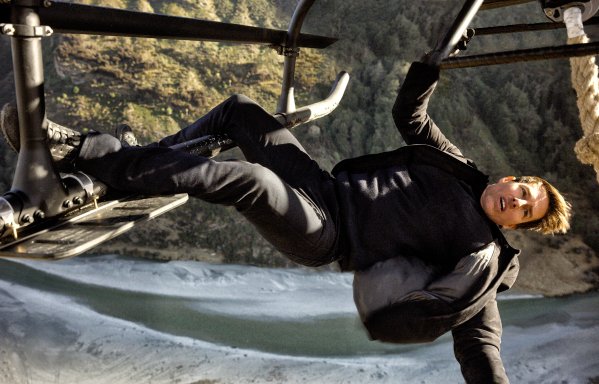 Mission: Impossible—Fallout May Be the Best Since the Original
Next Up: Editor's Pick