The Father Offers an Unsparing Glimpse into the Trials, and the Mysteries, of Old Age

The Father is a horror movie with not a single supernatural element: All of its terrors are implied, drawn from the tricks the human mind plays on itself, even more so in old age. Ideally, to be an elderly person confers dignity; society is supposed to respect and value you more. Meanwhile, though, the personal indignities mount. Basic bodily functions become complicated or impossible. People speak to you as if you were a child. And those around you begin to assume you can’t remember things—very possibly because you can’t.

In The Father, that’s the convex-mirror world Anthony, as played by Anthony Hopkins, finds himself in. The movie’s opening suggests that Anthony is a relatively sturdy and with-it senior who’s at least somewhat capable of taking care of himself. He enjoys his classical music; he pads around his memory-filled London apartment not in a fog of confusion but in a way that suggests he knows every contour intimately. But his daughter, Anne (Olivia Colman), who has stopped in to see him, notes with dismay that he’s dismissed the caregiver she’s hired for him. (He believes, or perhaps just claims, that the woman has stolen his watch, a recurring riff in his repertoire.) Anne is worried, particularly because she’s about to make a leap that will mean she can’t check in on her father regularly. She’s met a man; she’s moving to Paris. Anthony at first insults her, expressing surprise that she could meet anyone. Then he slumps into pure neediness. Both of these expressions of distilled emotion are painful to watch. Is he manipulating her, or breaking her heart, or both?

That early scene is the most straightforward element of The Father, which was directed by Florian Zeller and adapted, by Christopher Hampton, from Zeller’s play of the same name. (The film has been nominated for six Academy Awards, including Best Picture; Hopkins and Colman have also received nominations for Best Actor and Best Supporting Actress.) In the scenes that follow, Anne is sometimes played by another actor (Olivia Williams). A man who may or may not be her husband is played by Mark Gatiss and Rufus Sewell. Sometimes these characters claim to live in the apartment with Anthony; they assert, in fact, that they are its owners and he has been invited to live with them, a state of affairs that Anthony is certain cannot be accurate. A cheerful helper, played by Imogen Poots, enters the scene; Anthony alternately charms her and insults her, switching on a dime. She shrinks from him, but her demeanor has some steel in it. She has experience working with older people. She knows that sometimes this is what they’re like.

Anthony doesn’t always know what’s happening, and neither do we, all by design. Even the flat around him changes shape, its walls and the pictures hanging on them registering differently from one scene to another. Is Anthony’s family gaslighting him, as an attempt to get his flat? Or is he imagining all of this? None of that is clear until the movie’s crushing final scene. The Father is a polished piece of work but an unsparing one, offering no false assurances.

Hopkins clearly relishes the challenge that’s been tossed to him. In some scenes Anthony is robust and spry; in others, he’s stooped like an ailing king, trying to hang onto some shred of self-sufficiency. Sometimes he roars like a tyrant, but there are also moments when he’s as plaintive and weak as a kitten, bewildered by a world, and by people, he no longer recognizes.

Colman follows along in this dance, responding to a man she loves but no longer understands. Anne has a sister who has died, and Anthony hasn’t grasped that his other daughter is gone for good. He sometimes berates the one who remains, stating outright that the other was his favorite. Colman, such a wondrous actor, registers these shifts in the same way the texture and light of the moon seems to change with tiny variances in the atmosphere. She’s both pained and helpless, experiencing feelings that anyone who has spent time around an unpredictable fellow human, particularly an elderly one, can recognize. Is Anthony finally expressing long-buried resentments, genuine aggravations that he has never allowed to the surface? Or are these cruel comments merely flights of fiction, delusions dredged from who knows where?

The Father can only reflect on those questions, not answer them. But it’s resolute about one thing: no one can solve the mystery of old age in advance. And when the time comes, it’s something we have to navigate on our own, even if we’re lucky enough to be surrounded by people trying to help. In The Father, Anthony invites us to tag along, to get a sense of how it feels, but we can only follow so far. Leaving him behind is both a relief and a heartbreak. 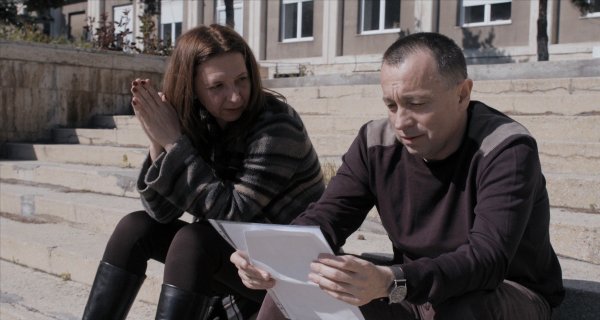 Oscar-Nominated Documentary Collective Is a Gripping Story of Investigative Journalism
Next Up: Editor's Pick