The Best, Worst and Most Head-Scratching Moments of the 2021 Grammy Awards

The 2021 Grammys were never going to be normal. The 63rd Annual Grammy Awards toggled between an outdoor set-up around the Los Angeles Convention Center populated with small tables of stars, and an indoor performance stage for the show’s set pieces. Host Trevor Noah emceed the nearly four-hour event with an admirable insistence on staying energized. It didn’t feel like a Zoom event—thanks to those live performances and the in-person seating—but it didn’t quite feel like the Grammys, either. Still, it was a historic night. Here are some of the most memorable moments from the 2021 Grammy Awards.

With her assist on Megan Thee Stallion’s “Savage (Remix)” and her own win for “Black Parade” as best R&B performance, Beyoncé made history as the winningest woman in Grammy history, with 28 awards. (She ties Quincy Jones). She was not the only artist to break a record: with Taylor Swift’s win for Folklore as Album of the Year, Swift became the first woman to win that particular prize three times over.

Swift and Beyoncé were just two of the women who completely dominated the evening’s Grammys. Billie Eilish took home Record of the Year for “Everything I Wanted.” Megan Thee Stallion became Best New Artist, won twice for “Savage” and performed a high-octane medley—joined by Cardi B, having a blast. Dua Lipa, also a winner for her album Future Nostalgia, amped up the evening’s energy early on with a sparkling performance of her own. In a surprise, H.E.R. took home the trophy for “I Can’t Breathe” as Song of the Year. And a trio of country music stars—Miranda Lambert, Mickey Guyton and Maren Morris—proved, in a series of solo performances, just why the Country Music Album category was all women this year.

The Grammys—and the music industry overall—have long been criticized for misogyny and for undervaluing the contributions of female artists. (See: former Recording Academy President Neill Portnow’s statement in 2018 that women needed to “step up,” and Lipa’s response while accepting her prize a year later.) Tonight showed that women haven’t just “stepped up”: they’ve fully—and rightfully—taken over. Or at least the Grammys are finally seeing them.

As the pop world has splintered out across genre and borders, there seem to be fewer and fewer down-the-middle, spectacle-driven pop stars who treat Pop as both a craft and a confined musical genre. Into the void steps Dua Lipa, the English-Albanian singer who for years has steadily been building an unimpeachable set of musical and visual aesthetics that position her as pop’s new center. At the Grammys, Dua delivered airtight renditions of “Levitating” and “Don’t Start Now,” toggling with ease through various performing modes—solo, with a buddy (DaBaby), and a dance troupe. Lipa has said she is aiming for a career like Madonna’s; this performance was a clear step in the right direction.

Best Use of a Buddy System: Squads

A central part of the Grammys’ schtick is to force musicians to be friends. Across the years, their cross-generational, cross-genre mashups—Eminem and Elton John, Gorillaz and Madonna—have resulted in some of the strangest (and sometimes cringiest) moments in music history.

Luckily, perhaps due to social distancing, the emphasis on this type of Grammy Moment was severely cut back—and instead, the producers let real collaborators and friends take the stage, allowing their chemistry to flow. So Bad Bunny and Jhay Cortez circled each other in a maze of LED lights; Taylor Swift, Aaron Dessner and Jack Antonoff reveled in their joint faerie cottagecore fantasies. Anderson.Paak and Bruno Mars egged each other on to corny crooning heights; the Haim sisters faced each other in a triangle, tossing their hair back and banging out “The Steps” as if in a living room jam session.

And on “WAP,” Megan Thee Stallion and Cardi B twerked in tandem, surely setting the new high mark for ass shaking at a Recording Academy event and undoubtedly provoking many a strained living room conversation across the country. Seeing artists who actually want to be onstage with each other was a welcome relief.

Four small music venues around the country—the Station Inn in Nashville, Tenn., the Troubadour in L.A., the Apollo Theater in Harlem and the Hotel Cafe in L.A.—were given moments to share their history and reflect on the challenges over the last year during special segments mixed into the evening’s show, each highlighting the venues’ employees. They even got to announce winners for different categories, a role usually reserved for artists.

The spotlight was particularly meaningful this year: music venues have been some of the businesses hardest hit by the pandemic’s economic impact. First to shut down, they will also be last to reopen, due to ongoing restrictions around indoor group gatherings. And while the National Independent Venues Association has worked hard to procure pandemic relief funding for the hundreds of businesses around the country that rely on the allure of live music to pay the rent, many of these historic venues remain in danger. The Grammys’ attention felt both appropriate—after all, most artists are dependent on these venues for their own career success—and much needed.

DaBaby, Roddy Ricch and Megan thee Stallion are three of the biggest stars in the world; their charisma and talent speak for themselves. So it was disappointing to watch them have to assimilate their performances through the lens of white culture. DaBaby was joined by a string section and a schmaltzy chorus; Megan Thee Stallion performed a tap routine on a Copacabana-like set; Roddy Rich was accompanied by a harp.

It’s completely possible that these were the artistic choices they wanted. But it’s become an overwhelming pattern at the Grammys for rap to be presented in a sanitized pantomime of some bygone era of white culture—as if the only way for audiences to understand these new stars is to directly draw a line to older, familiar ones. The impression it creates is that the Grammys can only legitimize these upstarts by adding familiar elements like a violin or a chorus line.

On the flip side, some of this year’s strongest Grammy moments happened precisely when they gave hip-hop artists free rein their own home turf. The TV debut of Megan and Cardi’s monster smash “WAP” couldn’t have been more salacious or compelling—and the breakdown at the song’s end, indebted to New Orleans bounce, showed how these songs can be refracted through other styles that aren’t classical music or Broadway. Meanwhile, Lil Baby literally took to the streets in a searing performance of his Black Lives Matter anthem “The Bigger Picture,” his voice gasping and straining poignantly over his rapid-fire syllables about injustice and reform, while Tamika Mallory and Killer Mike offered eloquent support. While “WAP” and “The Bigger Picture” are very different songs with very different aims, they both served as strong reminders that these artists don’t need to cater to an outdated value system.

Most Head-Scratching: Billie Eilish’s Record of the Year win

Even Billie Eilish herself was shocked to win the evening’s final award, the vaunted Record of the Year, for her soft ballad “Everything I Wanted.” Eilish was last year’s big winner, taking home not only the well-earned Best New Artist designation in 2020 but also sweeping Album, Song and Record for her debut When We All Fall Asleep, Where Do We Go and hit track “Bad Guy.” It seems that this year, the voters were eager to maintain their support for her work, even outside of an album cycle.

“This is really embarrassing for me,” she said. “Megan, girl… I was gonna write a speech about how you deserve this but then I was like, ‘There’s no way they’re going to choose me,” she went on, calling Megan “unstoppable.” “You deserve it,” she said. She follows in the now-familiar footsteps of artists like Macklemore and Adele paying tribute to Black nominees in their categories (Kendrick Lamar and Beyoncé, respectively) after unexpected wins.

Crowd reaction shots have long been a vital part of Grammys telecasts: whenever the video of Blue Ivy shushing Beyoncé and Jay-Z is made into an NFT, it will be sold for millions. This year, the audience was essentially stripped down to the stars themselves, giving the performances the feel of sparsely-attended opening acts—and as a result, the reaction shots were even more awkward and entertaining than usual. Harry Styles wolf-whistled for Billie Eilish; Eilish and Finneas politely bobbed along to the Black Pumas. Miranda Lambert, tumbler in hand, swayed to Maren Morris’ “The Bones,” while Bad Bunny animatedly sang every word to Dua Lipa’s “Levitating.” Rev up the GIF-making machine. 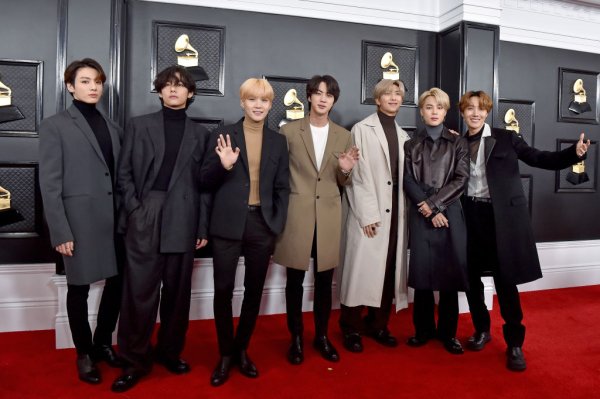 Why BTS's 2021 Grammys Performance Matters
Next Up: Editor's Pick