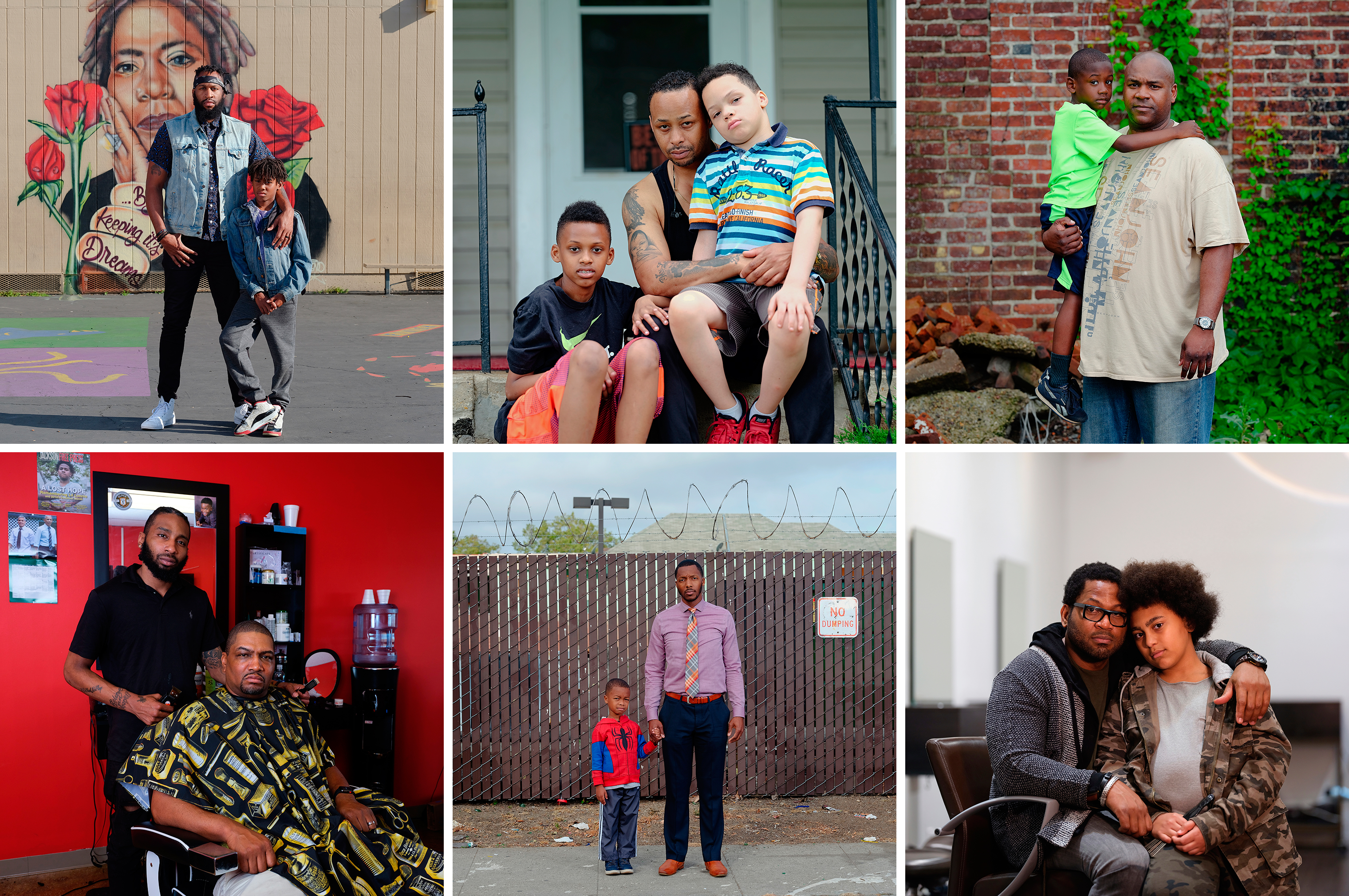 My son Langston came into the house visibly angry. His jaw was clenched, and his eyes were red and narrowed. “What’s wrong?” I quickly asked. “I was just trying to park and get to work,” he said.

Last summer, Langston was an intern for a progressive organization in New Jersey. They had been lobbying at the capitol in Trenton that day. He left home hoping they could make a difference. But as he attempted to park at the statehouse, a police officer stopped him and roughly told him to park elsewhere. As Langston searched for a different spot, another officer stopped him, drilled him with questions and told him to find somewhere else to park. He stood still in the kitchen, not really looking at me as he spoke. And then, “I got stopped again, Dad. Again! And the cop asked me, ‘Who is your P.O.?’ And I said, ‘What’s a P.O.?’ and the cop yelled, ‘Parole officer!’ I was in a suit, Dad! A suit!” A single tear fell down his face.

This was the latest in a string of incidents. As father and son, we’d had “the talk.” Not the one about sex that all parents have. The one about being black in America. He had told me of his encounters with the police before. I longed to protect him. But here he was in front of me again, 21 years of age, full of rage. I felt helpless as a father. I shouted, “F-ck!” and poured us a stiff drink. I didn’t know what else to do.

I am sure I am not alone. Black fathers throughout this country struggle to raise their sons in a world where they seemingly have bull’s-eyes on their backs. We work hard at striking the delicate balance between unconditional love and providing the discipline our sons and daughters will need to survive in America. We watch them as they take their first steps. Teach them how to ride their bicycles without training wheels. We attend their basketball games. Tend to their scratches and bruises. Argue and fight with them when they become teenagers. Worry about their choices and their futures.

We do so while much of the country–well, much of white America–believes we are absent from our children’s lives. The stereotype of the absent black father has masqueraded as common sense, even if the data suggest otherwise. Josh Levs’ 2015 book, All In, showed that the majority of black men do live with their children. A 2013 Centers for Disease Control and Prevention report found that black fathers are more likely than their white and Hispanic counterparts to bathe, read to, talk with and review homework with their children on a daily basis. Of course, there are black men who have turned their backs on their children. But they are no different than other men who have done the same.

I know that I have a special boy. But my reality as a father is, one day, this 10-year-old could not come home—at the hands of foolishness or hatred or misunderstanding. And if I can give him anything, I would just say, “Take your life one day at a time, man. Don’t let this world suck you into it with the illusions of happiness and the illusions of self-worth. Be your own man. Make your own mind. Have your own decisions. And above all, don’t be afraid of anything.”

The persistence of the stereotype, however, sheds light on the context within which we must raise our children–especially our sons. They will grow up, and we must raise them in a world that has a host of assumptions about who they are and what they are capable of. I remember my own father, a hard man who weathered brutal Mississippi summers to deliver mail, telling me, “I am not here to be your friend. I have to prepare you for the world out there, and it ain’t a friendly place.” As if raising children isn’t hard enough, we have to do so with the added burden of preparing them for a racist world. That fact alone often interrupts intimacies. It can make private, black spaces hard and sometimes appear unloving.

We comfort our sons when their hearts are broken. Encourage them after a crushing defeat. Criticize their lack of effort. Prod them to do better in school. We urge them to dream big–but with the refrain that, if they are going to achieve their dreams, they will have to be twice as good and work twice as hard as everyone else. And there it is: even in the most intimate moments, black fathers have to remind their children that this world is not organized in their favor.

Ruddy Roye’s photographs offer a glimpse into those interrupted intimacies. With these images, “we see the disparate range of the relationships between fathers and sons,” Roye told me. Throughout, we see fathers pulling their sons close: their arms draped around them, the boys snuggled tight, trying to approximate a space of safety.

But these images are haunted by the reality of what lies beyond the reach of our arms. My son came home angry and in tears. Thank God he came home. Think about the blank stare of Trayvon Martin’s dad or the rage in the eyes of Michael Brown Sr., or listen to the unimaginable grief of Alton Sterling’s son as he wept for his late father. Black fathers are here. Roye’s photographs bear witness to that fact. We are trying desperately to raise our children, to shower them with love, to allow them to dream big–and to keep them alive. — Eddie S. Glaude Jr.

Interviews have been edited and condensed.

I teach my sons that when life gets hard, never give up. There was a time when I was going to lose it all. It was on Father’s Day. I work as an engineer, in my father’s footsteps. I got a call from my job: to come in, stabilize the boiler room. Before I could leave, one of the stabilizer tanks exploded. I got cracked across the head. I was out for 2½ years. I sold everything I had just to keep a roof over our heads. To keep things afloat, I started my own business. It’s always good to show a physical example of strength, determination and the willingness to never give up.

Every day, we talk about how our day was and about being a leader and a good listener and a good helper. His school is African-centered and teaches the greatness of precolonial kings and kingdoms, rather than him learning about slavery as if that were our first entry point into history. My father is Nigerian, so we make sure that’s a part of his understanding of who he is-that when he enters in the room, he has that greatness that he carries within him.

I realized at an early age that he was a very spiritual guy. But he had his own mind. He would have to learn just from observing me. We used to bowl, and people said, “I didn’t know Muslims had fun?” He was taking all this in—how people responded to us, respected us. Also, my wife was a [gang] violence interrupter, so he and his siblings knew what was happening in the community and were aware of certain things not to be involved in. He saw the distinction between right and wrong.

I cannot protect my son. I cannot protect my daughter. When a black teen does something, [it’s] “We’re gonna teach him a lesson.” And when a white teen does something, it’s “Oh, he’s a kid. It’s a phase.” The first time I spoke to him about this, he was about 10. And his response to me was, “Dad, I’m half-white.” And I was like, “I get that. But in everybody else’s world, you’re not. They think you’re black.” He’s having a hard time having to compute that.

I’m sheriff of Hinds County. When I became an officer in law enforcement in the early ’80s, I knew how the environment was here, so I didn’t want my son to be a victim. I wanted him to be a vessel. I was very protective of [my sons], but I let them get their knees skinned. I would take him to the funeral home. I would let him see bodies in the back that were shot up because guys were trying to commit crimes, and let him know this was just one-way; there are consequences.

To raise a black man in this society, I was fortunate enough to be able to be raised around a father that was in the workforce, and he was a teacher. So I saw a work ethic early. And then I have a bloodline of just hustlers and entrepreneurs, so that just gave me the work ethic to know that you’ve got to have your own business. So my son picked that up. You’d make two dollars, you turn it into four. All black men in America and beyond need to have their own business.

Unfortunately about a year, year-and-a-half ago, I had a talk with my then-, what, six-year-old about police. And that police are supposed to be good people. Unfortunately, as human beings, all of them aren’t good people. So when you deal with them, you have to be somewhat more docile. Because I want you to come home safe. Because I don’t want you to be the next news clip of a young kid shot playing with something that looked like something that they thought was a gun. Because the cop was scared, racist, confused or whatever. Because he said you were combative, you didn’t listen or whatever reason that came up. And that’s a fear that I felt like I never should have had to have. And that’s always been around.

I won’t say nothing to him that ain’t going to be beneficial for him. I don’t just say any kind of sh-t to him. I say some sh-t that I know he needs, you know what I’m saying? And whether he listens or not, fine. But I come to find out, he listens to everything I say.

He’s very observant about things. He will see something and say, “Hey Daddy, can I do that?” I explained to him, “Just because you see an adult do it, doesn’t make it right.” I just hope that I can prepare him, because it’s a mean world. He wants to know my phone number, so we go over my phone number every day, just in case he might need to call me. That’s something that we’re working on. And his name. We gotta get his name right, and his letters. We really haven’t had a rough talk about his identity. We haven’t got on that yet.

Ruddy Roye is a documentary photographer based in New York City and a member of VII. Follow him on Instagram @ruddyroye.

Eddie S. Glaude Jr., a TIME columnist, is the chair of the department of African-American studies at Princeton University and author of Democracy in Black. Follow him on Twitter @esglaude.

Andrew Katz, who produced this project, is the Deputy Director of Multimedia at TIME. Follow him on Instagram @katzandrew.

Nate Hopper, who edited this project, is the Ideas Editor at TIME. Follow him on Twitter @ndhopper.