When an awards show bombs, the first person everyone wants to point a finger at is the host. But there was little Tina Fey and Amy Poehler could’ve done to save Sunday’s 78th Golden Globe Awards. (Can you imagine how much worse it might have been if the producers had invited Ricky Gervais back for another serving of sanctimony?) And no one knew that better than the emcees themselves. “Could this whole night have been an email?” Fey asked a small, socially distanced audience of first responders and essential workers at New York’s Rainbow Room. Then she answered her own question: “Yes!”

In fact, Tina and Amy (who represented the West Coast branch of the industry at the Beverly Hilton) did a pretty admirable job for two people co-hosting a primetime telecast from opposite sides of the country. Their opening monologue had some solid jokes about the ever-shrinking distinction between movies and TV (Poehler: “TV is the one that I watch five hours straight, but a movie is the one that I don’t turn on because it’s two hours.” Fey: “If you’re like, ‘Mario Lopez is surprisingly good in this,’ that’s TV”). Fey aimed a perfect backhanded compliment at The Trial of the Chicago 7 honoree Aaron Sorkin: “He can have seven men talking, but it feels like 100 men talking.” Toward the end of their mercifully concise intro, they even addressed the elephant in the ballroom: accusations that the Hollywood Foreign Press Association, which administers the Globes, has a racial representation problem. “We all know that awards shows are stupid,” Fey admitted. “But the point is, even with stupid things, inclusivity is important.” At a time when it’s hard to get worked up about little gold statues, it was the right chord to strike.

Unfortunately, the damage had been done long before Fey and Poehler stepped onto their color-coordinated stages. For years, the awards-industrial complex has faced credible accusations of racism, sexism, provincialism, commercialism, devaluing real art, gamifying creativity, ruining theatrical-release calendars and more. But the HFPA—a mysterious 87-member organization known for its idiosyncratic choices—has an even shakier claim on authority than the other major entertainment awards, which at least reflect the tastes of much larger and more legitimate voting bodies.

That was before the recent L.A. Times exposé that probed the HFPA’s apparent conflicts of interest, self-dealing, culture of expensive freebies (including a lavish junket for one of 2021’s shoddiest nominees, Emily in Paris) and other ethically shady practices. Widespread frustration over the lack of best picture nominations for standout Black ensemble films like Ma Rainey’s Black Bottom, Judas and the Black Messiah, One Night in Miami and Da 5 Bloods heralded confirmation that the group had zero Black members. Those snubs felt extra infuriating in light of nods for Music and The Prom, two musicals that have been called out for being offensive as well as just plain bad. And a brief segment of the ceremony in which three HFPA officials offered wooden apologies and promises to create “an environment where diversity is the norm” didn’t inspire much confidence that meaningful change was in the works for the organization.

Add to those scandals a COVID-necessitated virtual telecast that precluded both the usual pleasures of watching glitzily attired famous people get trashed together and the fashion show that is the red carpet (though this didn’t stop E! from airing four hours of pre-show coverage), and even the most nihilistic sort of enjoyment felt elusive. Sure, there were bright spots, like big wins for Nomadland and its director Chloé Zhao, The Queen’s Gambit and the late Ma Rainey star Chadwick Boseman, whose wife Taylor Simone Ledward accepted his award with tearful grace. Two genuine mensches, Norman Lear and Jane Fonda, took home lifetime achievement accolades—and Fonda used her time to shout out recent works that challenged her, such as the brilliant, notoriously snubbed-by-the-Globes I May Destroy You. On a lighter note, Sacha Baron Cohen made the most of his Borat victories, joking that his co-star of sorts, Rudy Giuliani, subsequently starred in “hits like Four Seasons Landscaping, Hair Dye Another Day and the courtroom drama A Very Public Fart.” Many nominees logged on with adorable children (Minari writer-director Lee Isaac Chung’s daughter!) or pets (Jodie Foster’s dog!) by their side. Every TV special should be legally required to include at least a few seconds of Maya Rudolph singing in a sparkly caftan.

The thing is, there’s only so much you can do to zhuzh up an event that most celebrities have to join via video chat, because it’s happening in the midst of a pandemic that has killed more than 500,000 Americans. A three-hour Zoom meeting with appearances by Elle Fanning and Regina King in evening gowns is, alas, still a three-hour Zoom meeting—which is to say, it’s riddled with technical difficulties and not exactly an escapist treat for a nation with Zoom fatigue. Tuning in becomes even less enticing when you’re aware that the party is not only thrown by, but also serves to reinforce the cultural standing of an organization with much to answer for—and when the nominees comprise a seemingly random mix of good and bad art.

No matter how the ratings shake out, the Golden Globes will air on NBC, which struck an eight-year deal to lock down that privilege in 2018, for the foreseeable future. Yet it will be fascinating to see what effect this year’s revelations—and next year’s likely return to in-person awards ceremonies—will have on potential big-name hosts and guests. Will they be skittish about supporting an increasingly controversial institution without knowing what else will come to light? Or will relief at the prospect of a traditional, champagne-drunk, red-carpeted Globes reawaken the enthusiasm of Hollywood types and audiences alike, allowing the questionably accountable HFPA to power through to another decade of relevance? “If we play our cards right, it might be the last awards show ever!” Fey enthused in one of this year’s promos. If only that had been a promise, not a joke. 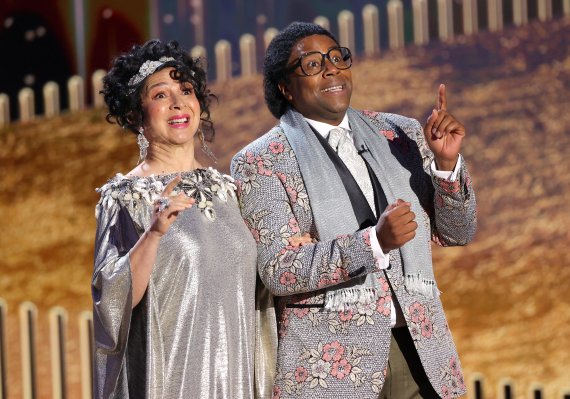