Meryl Streep Has Nothing Left to Prove. The Results Are Downright Delightful

Meryl Streep in a scene from 'The Prom.' At this stage in her career, Streep is still working hard, but she's also having fun, and this renewed sense of lightness suits her.
MELINDA SUE GORDON/NETFLIX—© 2020 Netflix, Inc.
By Stephanie Zacharek

When the subject of great modern-day women actors comes up, Meryl Streep’s name always elbows itself to the front. In a recent roundup of the greatest actors of the 21st century, New York Times film critics A.O. Scott and Manohla Dargis opted not to include Streep, and readers made their displeasure known. Didn’t they realize she’d won Oscars? The critics stood firm in their judgment, publicly defending their choice in a subsequent interview. But the readers’ grumbling made one thing clear: failing to recognize the glory of Streep was a personal affront to their own good taste.

Streep is our default Great Actress, the name you can always drop to show your sterling sense of discernment. The research! The accents! The willingness to don unflattering hairdos! She can do anything, which is always part of the argument. She’s so versatile, she can even do comedy—but it’s the “even” that’s precisely the problem in how we perceive her. Because I’d argue that her comic gifts—as seen in two recent releases, The Prom and Let Them All Talk—aren’t the gravy on the side but the main course: it’s her capacity to channel seemingly offhanded joy—or wickedness or nuttiness—that makes everything else she does possible.

Read More: The 10 Best Movie Performances of the 2010s

First, let’s get the pile of Oscars out of the way. Since 1979, Streep has been nominated for 21 performances. She has won three times: First in 1980 for her supporting role in Kramer vs. Kramer, and in 1983 and 2012 for her leading roles in, respectively, Sophie’s Choice and The Iron Lady. Among those 21 performances, some have been quietly marvelous (it’s all too easy to forget how luminously appealing she is in The Bridges of Madison County, a movie few people think about anymore); others have seemed more like tortured stunts (in The Iron Lady, she has such a firm command over her portrayal of Margaret Thatcher that all you see is the command).

But among all of these nominated performances—as well as some that didn’t get Oscar attention—for me it’s the comedy roles that really sing. Her trilling Julia Child in Nora Ephron’s 2009 Julie & Julia wasn’t just an impersonation of the woman we knew as TV’s French Chef; it was a bread-and-butter ballad of our idea of Julia Child, an act of intimacy and generosity and shared pleasure that went much deeper than just getting the voice right. And the wicked Streep—the one who gave us the imperious magazine editor Miranda Priestley in David Frankel’s The Devil Wears Prada (2006), or the youth-obsessed diva Madeline in Robert Zemeckis’ fiendish satire Death Becomes Her (1992)—is just as glorious. No one gives a more elegant side-eye than Streep. As a comic performer, she reaches a state of being—on high alert yet also fully relaxed—that’s both complex and delicate. It’s her timing that makes her royalty.

She is also well past the point where she has anything to prove, which may be why the two performances we’re getting from her in late 2020—in Ryan Murphy’s Broadway-musical adaptation The Prom, and in Steven Soderbergh’s sly semi-comedy Let Them All Talk—feel so casually exhilarating. As working actors go, Streep has worked a lot. But something has shifted in her, as if she’s let go of something she might not have known she was hanging onto. She’s still working but she’s also having fun, and this renewed sense of lightness suits her.

It’s also a way of defying the sorry truth that good parts for women actors become scarce as they age. Admittedly, Streep is in a special class—she’s always in demand, and she makes the most of even smaller roles, like her turn as the enigmatically crotchety Aunt March in Greta Gerwig’s superb Little Women, or as glamorously loopy Cousin Topsy, in Rob Marshall’s underappreciated (and charming) Mary Poppins Returns. Yet in both The Prom and Let Them All Talk, she leans heavily into playing women of a certain age, without apology—as if to acknowledge that it’s all the apologizing that truly ages you.

The Prom is over-the-top in that characteristically Ryan Murphy way, and Streep clicks right into that as Dee Dee Allen, a Broadway star who’s acutely aware of her sagging relevance. When her latest show bombs—it’s a musical based on the life of Eleanor Roosevelt—she cooks up a scheme with her friends and fellow children of Broadway (played by James Corden, Nicole Kidman and Andrew Rannells) to “save” a gay teenager (Jo Ellen Pellman) from homophobic oppression in her small Indiana town. Dee Dee’s aims are self-serving, triggered by a scathing New York Times review that referred to her as narcissistic. But would you want her to be anything but? Streep, in a cropped hot-red wig and dressed in an assortment of mustard-and-purple cape ensembles and sequined dresses slit down to there, serves up all the juicy starlet ham you could desire. She sings, she dances, she swans. It’s overkill, which is just enough.

But even here, playing a deliberate caricature, she pulls off sterling “how’d she do that?” moments, small gestures that clue us in to the vulnerability beneath Dee Dee’s spangled bravado. Take, for example, the spontaneous high kick—atop a ladder, no less—she executes to cap off a particularly vigorous musical number. (Dee Dee is working hard to impress a younger love interest, a midwestern school principal played by Keegan-Michael Key. It works.) Streep is 71, playing a character who’s roughly the same age. We can say her age doesn’t matter, but in fact her age is everything—it enfolds everything women don’t want to say about getting older. We’re supposed to fight it, but we’re also not supposed to look as if we’re trying too hard. We’re supposed to hide it so we can keep working, even as our experience is the heart of all we have to offer. In roles like this one, Streep is unapologetic about everything. She’s not telling us that we, too, should be able to pull off a literal high kick. It’s the figurative high kick that counts. Her capacity for delight is the thing to aspire to.

Streep’s character in Let Them All Talk is more subtle and cerebral, and toward the end, the performance veers into seriousness we may not be quite prepared for. But as Alice, a bigshot prize-winning novelist with a steamer trunk of an ego to match, Streep is great fun to watch. Alice is late—very late—with her next book. A new young agent, Karen (Gemma Chan), has just inherited her as a client and is nervously trying to corral her into producing something sellable. Alice has just won a prestigious literary prize, to be bestowed upon her in England. But she claims she can’t fly—or perhaps she really can’t. And so Karen books passage for her on the Queen Mary 2, and obliges when Alice angles to bring along her two oldest friends, Roberta and Susan (Candice Bergen and Dianne Wiest), as well her nephew, Tyler (Lucas Hedges), who’s game for, as he puts it, taking “care of these lovely old women.”

Once aboard, Alice plays the magnanimous hostess, though she doesn’t want to have much to do with her two old friends. It turns out that Roberta deeply resents her; Susan, who’s almost too tolerant, is forced into the role of peacemaker. The story unspools somewhat lackadaisically—celebrated short-story writer Deborah Eisenberg laid down the story’s bare bones, while the actors improvised much of the dialogue—but the dynamic between these three women actors is the real draw.

The three of them can’t really get along because Alice can’t seem to get along with anyone. At the beginning of the trip, she hands out books all around—not her own, but one by a novelist she has long revered, whose grave she plans to visit on this trip. (That novelist’s name is Blodwyn Pugh, and the book is called Realm of the Owl. I dare you to look it up.) Alice’s outfits speak of genteel wealth earned from intellectual pursuits, but they also employ all the tricks ladies learn when they reach a certain age: her go-to accessories include sparkly, dangly earrings that may or may not be Victorian antiques, and lofty rectangular scarves knotted loosely around the throat or draped with Grecian precision across the shoulders. These clothes are a kind of lustrous armor, but for women over 50 or 60 they’re also a whispered acknowledgment of all the things we used to love to wear, but that just don’t work anymore. We substitute regality for youthful sexual allure, because it’s what’s available to us. (The costumes, in all their laid-back genius, are by Ellen Mirojnick.) Streep, as Alice, is in tune with these truths. She carries herself like a queen, swathed in all the cashmere she can afford.

Meryl Streep as Alice in 'Let Them All Talk'
HBO Max

Alice’s autocratic coolness is an exaggerated version of the grand dame routine that, in real life, Streep puts on at awards shows and in interviews; Alice, like Streep-the-persona, is always in control, and she must make the world know it. The pleasure of this performance lies in the way Streep digs deep into that urge to control, mocking it, amplifying it, twirling it around like a strand of flapper’s pearls. When the women learn that a hugely popular mystery writer is also aboard the ship, only two of them are excited, because only two of them have heard of him. They’ve also actually read him, because everyone in the universe has, except for Alice. But then, she writes literature; mysteries are so beneath her. “The prose is like Styrofoam!” she says huffily.

Alice’s authority over everything is a grand joke—until it isn’t. There’s a real person beneath Alice’s operatic ego, and by the movie’s end, Streep has revealed glimmers of her. But Alice the haughty literary diva is the person we want to spend time with, and Streep knows it. Alice is positively dreadful. If you knew her in real life, you’d vow never to take her calls again, only to run to have lunch with her a week later. Streep clearly adores Alice’s negative qualities: they invite her to dance, and that sets her free. Streep, the greatest actress in the universe, according to many, can do any accent you ask of her—though an accent is a convenient hook on which to hang a compliment. As some famous actor once allegedly said on his deathbed, Dying is easy, comedy is hard. But if it’s hard for Streep, she never shows it. The best accent is the one you can’t detect. 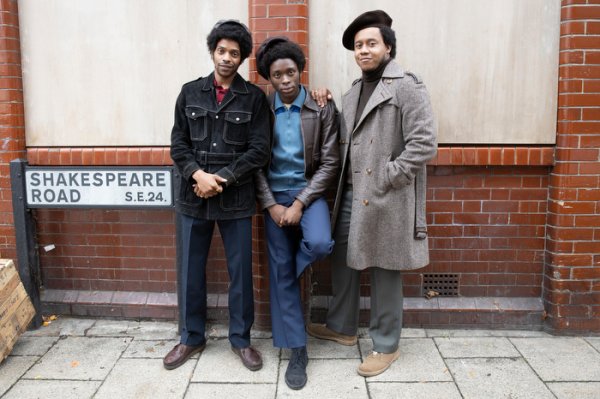 The Story Behind Small Axe: Alex Wheatle
Next Up: Editor's Pick