Stories of sexual assault have a disconcerting tendency to flatten out the victim’s personality until they are defined solely by the worst thing that ever happened to them. Some cop shows cycle through a different wounded party, living or dead, in each episode. But even the most sensitive depictions of rape and its aftermath—like the otherwise-excellent Netflix docudrama Unbelievable—end up reducing these characters to points on a grid. On one axis: where do they fall on the spectrum from helpless to empowered? On the other: how credible do they appear? The quadrant they land in determines the story’s outcome. Who these victims, most of them women, were before the attack and who they’ll become in its wake are footnotes.

If it is indeed easy to forget that rape survivors can contain multitudes, then HBO’s I May Destroy You, premiering on June 7, will make you remember. Writer, executive producer and co-director Michaela Coel, who broke out with the raunchy, zany yet sneakily insightful British sex comedy Chewing Gum, stars as young author Arabella. A pink-haired London party girl with a pack of fun friends, she made her name with a millennial cri de coeur that’s cherished by black, female peers who stop her in the street for selfies. By the time we meet her—on her umpteenth recent trip to Italy, demanding “Are we boyfriend and girlfriend?” of a taciturn local who doesn’t seem that into her—Arabella’s literary agency is clamoring for a draft her book. Back home, she plans to pull an all-nighter and finish it but succumbs to the siren song of her drinking buddies. The manuscript she manages to submit the next day, as she stumbles around in a fog, is incoherent enough to worry her reps. It’s all typical enough of a nasty, multi-substance hangover—until she’s suddenly struck by the image of a man panting over her in a bathroom. “Hmm,” she murmurs, and the credits roll on the premiere.

There are other signs that something bad happened while she was blacked out: a shattered smartphone screen, a cut on her forehead, the vague memory of an incident at an ATM. Still, it takes Arabella a while to believe her fragmented memory. Instead, she watches YouTube videos on the mysteries of consciousness, desperate to convince herself that the disturbing images she keeps seeing are all in her imagination. Even as she reports the possible rape to police, she insists that it “may not actually be real.” The look of pity on a female officer’s face as she digs into denial and makes excuses for her friends’ failure to get her home safe speaks not just to the depths of Arabella’s trauma, but also to an urgent need to reevaluate how she’s living and who she trusts.

This is dangerous territory. The decades of feminist organizing that culminated in the MeToo movement have introduced useful terms like “victim blaming” and “rape culture” into the lexicon, creating the impression that to dig into the life of a survivor is to suggest that they bear some responsibility for their suffering. Activists point out that there’s no reason to investigate a victim’s sexual history or choice of clothing in the courtroom or in the media; the only person who should shoulder the blame for a rape is the rapist. And they’re right. Yet fiction informed by this belief can veer into well-intentioned overcorrection, robbing the victim character of context to such an extent that, in an unfortunate bit of irony, their individuality gets erased in the bargain.

I May Destroy You stays on the right side of the line between providing context and shifting blame by telling an uncommonly holistic story—one that illustrates why Arabella was hurtling toward a hard reckoning long before the attack destabilized her false sense of security. A few of the show’s 12 half-hour episodes flash back to Arabella’s childhood, uncovering details that don’t fit the convenient narratives she’s created for herself about her parents’ unusual relationship and about the white girl who her accused her black, male friend of sexual assault in high school. In-depth story lines devoted her best friends Terry (Weruche Opia), a struggling actor who takes care of Arabella but also minimizes her pain, and Kwame (Paapa Essiedu), a gay man trying to help a love interest accept himself, raise more tough questions. Gray areas around consent become a theme: is it rape if a man stealthily removes his condom, or if someone agrees to one sex act but not a second? And why do some men get off on humiliating even the most GGG (to borrow shorthand from sex columnist Dan Savage) partners, snapping surreptitious nudes or luring a woman into a faux-spontaneous threesome she probably would have agreed to anyway?

This degree of complexity would’ve been enough to distinguish the show from hundreds of earlier representations of sexual misconduct. Remarkably, though, it grows even more ambitious as it continues, without alienating viewers by deploying academic buzzwords or condescending lectures, the way some equally sophisticated explorations of sexuality and trauma (see: Transparent) have. (Few post-Mad Men series have made such strong cases for the episodic recap.) Watching the three central characters talk through their ordeals, I found myself marveling at humans’ endless capacity to misjudge each other based on assumptions about race, gender, sexual orientation, occupation, family background, personal responsibility, etc. For a young black author like Arabella, a black female publisher won’t necessarily become a mentor; one straight white man can be a threat and another a comfort. Coel locates yet another source of nuance when her character gets hooked on vengeance vlogging and her therapist points out how social media exacerbates such misunderstandings. Then again, some guy at a party muses, maybe it’s just selfish to wallow in your own distress when we all might be dead of climate change in a few decades.

I May Destroy You isn’t ultimately about Arabella’s search for the truth of what happened to her on one harrowing night, though it does end up providing some closure regarding her rapist. It’s a show that understands how we carry the entire self-constructed narrative of our lives around with us, plugging in the prejudices, heuristics and misapprehensions we’ve absorbed over the years until we’re finally forced to confront them. More than the story of a woman who was raped, Coel is telling the story of how a writer living an unexamined life comes to know herself. 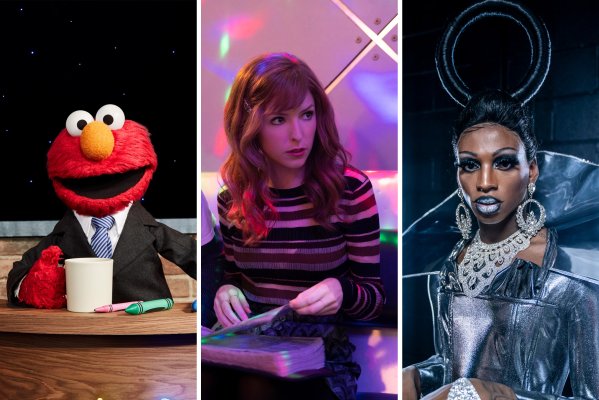 A Guide to the HBO Max Originals
Next Up: Editor's Pick