Frances McDormand Anchors Nomadland, a Quietly Powerful Vision of What America Ought to Be

The phrase “homeless person” is used so often, and so carelessly, that it’s almost as familiar as bland descriptors like “brown hair” or “blue eyes.” An individual who, for whatever reason, ceases to live in a house or an apartment somehow becomes transformed into an unidentifiable Other, a person for whom we have no convenient compartment. “Who was she before she was homeless?” we might ask ourselves when we see someone living on the street. The not-so-subtle subtext is that if you don’t live in a standard dwelling, your so-called homelessness is the most interesting thing about you.

In writer-director Chloé Zhao’s perceptive and cogent Nomadland—one of the most prominent selections of the fall film festivals, including Venice, Toronto, and New York, and which will open in theaters December 4—almost no one lives in a conventional house. Yet everyone has a home and, more importantly, a sense of self. Frances McDormand plays Fern, a woman from a Nevada town that once thrived but virtually vanished after a huge gypsum conglomerate closed its mine there. Her husband is dead, and she has no children—there’s nothing to hold her in place. So she buys a van, kitting it out with scaled-down eating, storage and sleeping spaces, and hits the road, picking up seasonal work where she can.

Fern is fictitious, but the world of Nomadland is real. Zhao—director of the extraordinary 2017 film The Rider, about (and starring) a young bronco rider who must redefine himself after a serious injury—has adapted the movie from a piece of reportage, Jessica Bruder’s 2017 book Nomadland: Surviving America in the Twenty-First Century. The film features several characters who also appear in Bruder’s book, including Bob Wells, who presides over a regular meetup called the Rubber Tramp Rendezvous, which provides a support system for modern nomads. These are people who have opted out of traditional modes of living for any combination of reasons: to see more of, and to feel more connected to, the country and its wonders; to free themselves from the shackles of the almighty dollar; to make the most of a limited or fixed income, especially around retirement age.

Fern is in her early sixties, and although it’s not spelled out, you get the sense that, now that the world (as well as her town) has all but discarded her, she’s longing for some way to reinvent herself. She runs into a former neighbor who, with kindness but also more than a hint of condescension, tells her that she’s always welcome if she “needs a place to stay.” Fern declines, politely enough, though you catch her simmering exasperation. As she puts it to the woman’s daughter, whom she used to tutor, “I’m not homeless, I’m just houseless—not the same thing, right?”

Fern at first defines herself by her sense of not-belonging. A friend she’s made doing holiday work at an Amazon fulfillment center, Linda May (played by a woman who is herself named Linda May, who lives on the road in real life), invites her to an upcoming Rubber Tramp Rendezvous. Fern hesitates, but Linda May gives her directions to the site anyway, just in case she should change her mind.

She does change her mind, because while iconoclasm is all well and good, humans—and Americans—need communities. That’s the essence of Nomadland, and the source of its quiet power. Nomadland isn’t a manifesto—there’s nothing dutifully somber about it. And although it doesn’t romanticize life on the road—for one thing, it shows that you need to be comfortable defecating in a bucket—joyousness is its chief characteristic. Like The Rider, it’s a window into a specific world, with one key character as a guide.

Fern is a bit of an oddball; her gangly walk seems ostrichlike, until you lock into its grace. We learn about her through an accumulation of details: she’s fitted her van—which she’s christened Vanguard—with a combo storage area and pull-down table, fashioned from her husband’s old tackle box. Inside, she keeps her nicest and most prized things, including a few pieces of the china her father collected for her, bit by bit, when she was a girl. Fern celebrates New Year’s Eve alone, in the RV lot reserved for seasonal Amazon workers—for the occasion, she dons a paper HAPPY NEW YEAR tiara. But as much as she loves being on her own, she also learns the pleasures of forming friendships on the road. One of these new friends is Dave (David Strathairn), who clearly has a crush on her; he persuades her to come along to spend a season slinging patties and wiping tables at South Dakota’s legendary tourist attraction Wall Drug. Fern likes Dave, but she’s much happier playing it by ear: She and the effervescently outgoing Linda May—a veteran of nomad life who tells an affecting story about how taking to the road helped her to emerge from despair—meet for a time at one locale or another and then go their separate ways, only to reunite happily somewhere down the road. At one of these reunions, they take jobs as camp hosts at a national park. In their downtime they amuse themselves by setting up a mini-spa, lounging like pashas in their sheet masks. These types of separations and reunions become the rhythm of Fern’s life, as changeable yet as steady as the rocking of the sea.

Nomadland at times has the feel of a documentary, but with none of the earnest flatness that mars even some very well-meaning documentaries; it has more in common with the breathing, lived-in quality of Barbara Kopple’s work, in films like Harlan County U.S.A. The material has animated something in McDormand, too. At first she seems to be playing her stock salt-of-the-earth, bad-haircut, earthtone-wearing individualist, which is also more or less the persona she projects in real life. That’s the sort of role that has won awards for her (including an Oscar, in 2018, for her lead performance in the faux-homespun parable Three Billboards Outside Ebbing, Missouri). But even if these types of performances give the appearance of radical nonconformity, to me they seem rigid in their own “Look, ma, no makeup!” way, their assertive realness the by-product of serious-actor determination. McDormand doesn’t always melt into her roles; she shoulders them like a warrior. The work is always on display, like armor.

But as Fern, McDormand is different, even if, in her no-makeup, bad-haircut way, she looks much the same. At one point Fern and some of her nomadic friends attend an RV convention, replete with display models of mobile homes that are much fancier than any of their makeshift vans. They enter one nervously, only to find themselves awed by its soft lighting, its clever storage space, its gleaming appliances (including the holy grail, a stacked washer and dryer). Fern is enchanted: “It’s like a disco!” she says, and what you hear in her voice is not derision at the shallowness of people’s desire for such niceties, but pure delight at the shininess of it all.

The citizens of Nomadland are, as one character puts it, people who have lived, and living always entails some suffering. But it’s joy, not suffering, that defines them—the joy of community and of self-sufficiency, of making do with what you have and bartering, when possible, for things you need. Fern, with her awkward gait and her crooked, cautious smile, is the queen of all she surveys, of the fields and mountains she sees during her long drives, of the streams where she stops for a while, of the shy, majestic bison she might happen to glimpse. Her home is wherever the road takes her—houseless but never homeless, and never alone, even in her solitude. There will always be a friend down the road. Her America is the one that ought to be, a place where people look after one another instead of standing defiantly against each other. They do the work of democracy, understanding that it’s part of the responsibility that comes with freedom. 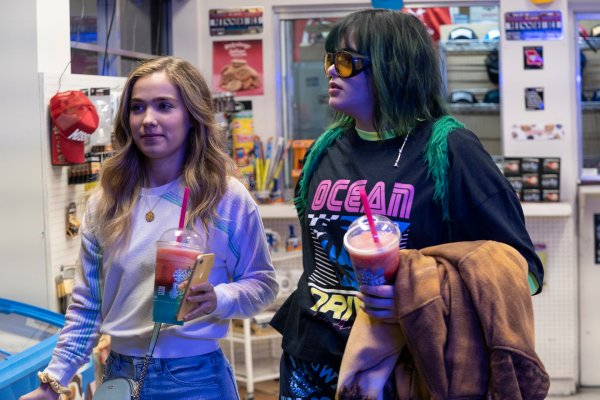 Unpregnant Is a Spirited Comedy About a Woman's Right to Choose
Next Up: Editor's Pick