Even if you already know the basic story of the Chicago Seven, Sorkin’s movie is so richly layered with detail that you'll surely find something new
NIKO TAVERNISE/NETFLIX—© 2020 Netflix, Inc
By Stephanie Zacharek

Though it’s tempting to view the courtroom sketch as a quaint relic of legal decorum, the physicality of drawing is urgent in a way that camerawork can’t always match. If you’re so inclined, you can Google a color-crayon courtroom drawing from October 29, 1969 showing Bobby Seale—cofounder of the Black Panthers and one of eight men put on trial that year for staging anti-war demonstrations at the 1968 Democratic National Convention in Chicago—gagged and bound to a chair. Earlier, in a fit of justified anger, he’d verbally interrupted the proceedings; the judge responded by ordering court officers to remove him from the court and restrain him. The drawing, by Howard Brodie and preserved in the Library of Congress, shows Seale holding his strong posture to the degree it’s physically possible, as he strains to write something on a legal pad; a Stravinsky-like stanza of strokes, slashes and loops, the sketch is an urgent, evocative work of reportage. That this could happen in an American court of law was and still is unthinkable, yet not unbelievable. Brodie’s drawing challenges a nation to face its own shame. To look at it more than 50 years later is to recognize how slow we’ve been in taking that shame to heart.

Brodie’s drawing comes to life, with all its somber weight, in a key scene in writer-director Aaron Sorkin’s The Trial of the Chicago 7, a movie as simultaneously entertaining and galvanizing as anything you’ll see this year. (It opens in select theaters on September 25 and will be available on Netflix beginning October 16.) Sorkin has detailed for us the half-circuslike, half-solemn drama of this intense pocket of American history, during which eight anti-war activists were tried for conspiring to incite violence at the convention. The Trial of the Chicago 7 is Sorkin at his Sorkinniest, in the good way, a work attuned to civic responsibility and small-d democratic ideals. It’s as lively as other Sorkin-scripted pictures like Moneyball (2011) and Charlie Wilson’s War (2007), and as astute as The Social Network (2010) was: we couldn’t have known at the time, though maybe we should have, that this story about the rise of opportunistic iconoclast Mark Zuckerberg was really a warning from the future.

And although The Trial of the Chicago 7 is only the second picture Sorkin has directed—the first was Molly’s Game, from 2017—in its construction, pacing and casting, it’s the work of an old soul. Sorkin takes a rather dense, complicated court case—one peopled with figures who clung to stubborn differences even in the context of their shared ideals—and keeps it aloft every minute, as if he were following the aerodynamic principles of hang-gliding rather than moviemaking. Best of all, he brings out the best each actor in this enormous ensemble cast has to offer; every character is rendered with jewelers-loupe clarity.

You need that gift of specificity to tell this story properly. These eight men were anything but a homogenous group, though that didn’t stop the nation’s conservative forces at the time from lumping them into one: Tom Hayden (here played by Eddie Redmayne) and Rennie Davis (Alex Sharp) were clean-cut, crew-neck-sweater-wearing members of the Students for a Democratic Society, or SDS, a left-wing group active since 1960. Staid dad and Boy Scout troop leader Dave Dellinger (John Carroll Lynch) was a longtime pacifist and a member of MOBE, the National Mobilization Committee to End the War in Vietnam. Abbie Hoffman (Sacha Baron Cohen) and Jerry Rubin (Jeremy Strong), members of the Youth International Party, or Yippies, were the Abbott-and-Costello wild card, a virtual comedy team steeped in marijuana vapors and leftist ideals. John Froines and Lee Weiner (played by Danny Flaherty and Noah Robbins) were two less-notable figures who were nonetheless happy to stand up for their ideals with the rest of the group. (One of them likens the trial to the Academy Awards. “It’s an honor just to be nominated.”) The eighth defendant, Bobby Seale (Yahya Abdul-Mateen II), of the Panthers, had never even met the others: he had arrived in Chicago to give a speech and departed within just a few hours. Even so, he was tossed in handily with this group, because the authorities believed the inclusion of a Black Panther in the proceedings would prove to the American people just how menacing this assemblage of citizens who had sought to exercise their right to protest truly was.

There’s a lot of talking in The Trial of the Chicago 7; it’s a courtroom drama, after all. But as fixated on words as Sorkin is, he knows they’re only part of the language of movies. The federal government’s prosecuting attorneys, Thomas Foran (J.C. MacKenzie) and Richard Schultz (Joseph Gordon-Levitt), show up to court in dark suits so crisp they could stand up by themselves. Meanwhile, one of the two lawyers enlisted to defend the seven, William Kunstler—played with the perfect degree of low-key bull-doggishness by Mark Rylance— shambles in wearing a rumpled tweed suit, a fake-leather glasses case peeking out of the breast pocket. You know just by his rushed, shambling carriage where he’s coming from. (Kunstler did not represent Seale, who had unsuccessfully sought to delay the trial because his own lawyer was undergoing a medical procedure.) And when Judge Julius Hoffman (Frank Langella) sweeps in, the silent rustle of his robes suggest that he thinks he’s jurisprudence royalty. The rest of the movie shows him up as a pompous, vindictive serpent, and sort of a boob to boot. Watching The Trial of the Chicago 7 is a little like reading Dickens: much of the fun lies in picking up on the signals of individual characters.

Even if you already know the basic story of the Chicago Seven—also commonly referred to as the Chicago Eight, to include Seale, although his case was severed from that of the others after a mistrial was declared on his behalf—Sorkin’s movie is so richly layered with detail that you’ll surely find something new. The Chicago DNC protests began peacefully and erupted into stunningly brutal violence, and Sorkin captures its horror here, weaving in some archival footage in the mode of Haskell Wexler’s groundbreaking 1969 fiction-nonfiction blend Medium Cool. The trial, instigated by newly installed Nixon attorney general and flunky John Mitchell, applied as gospel the assumption that the riots couldn’t possibly have been started by police; surely, law enforcement would never instigate a public disturbance. But when Sorkin shows us the young, bespectacled, somewhat fragile Rennie Davis being cracked across the back of the skull with a police baton—and the unfiltered, visceral response of his best friend, Tom Hayden—it strikes like lightning. Even the simmering distrust between certain members of the group—for example, the disdain preppy-proper Hayden shows for goofball-intellectual Abbie Hoffman—is woven firmly into the movie’s fabric. Every detail has meaning in the end.

I can hear what some of you are thinking: This movie is just two-hours-plus of men talking; who wants to watch that? I, too, dread movies about talking men, but the Trial of the Chicago 7 won me over in its first, fleet 10 minutes. In places, it’s unapologetically charming, particularly when it focuses on Hoffman and his sidekick, Jerry Rubin. As the two saunter into the courthouse, dressed in their usual hippie gear of tunics and headbands, Rubin handily catches an egg that one of the many bystanders—some supportive, but many angry—has thrown. It’s a neat trick, and Hoffman expresses his awe, before asking, “But now what do you do with it?” The small shadow of sadness that crosses Rubin’s face—what do you do with it?— is as perfect as the smooth surface of his rescued egg. Later, the two will show up in court draped in judge’s robes. When Judge Hoffman angrily demands that they remove their phoney-baloney costumes, they comply, revealing the Chicago police uniforms they’re wearing underneath.

That really happened, because just about everything in The Trial of the Chicago 7 really happened. Including the shackling of Seale. From the moment Seale is led away by officers, Sorkin is careful with this scene. He shows the beating of Seale in flashes of fast cutting; the suggestion is that the officers’ kicks and punches were calibrated so they’d leave no visible marks on Seale’s body. But the moment Seale is led back to his seat, his limbs constrained, his mouth bound by a wide lashing of white tape, the very texture of the air in the courtroom changes. Sorkin somehow conveys this invisible yet shattering atmospheric shift; it’s hard to map exactly how, even beyond the fact that Gordon-Levitt’s prosecutor Schultz—who’s shown from the start to be a semi-sympathetic foe—verbally expresses dismay at the sight of Seale’s condition, and not just because he knows it will damage his case. Sometimes a great scene induces a kind of synesthesia in a viewer; an image you see onscreen summons a metallic taste in your mouth, or some other weird, specifically physical sensation. I felt that way watching Seale being led back to his chair. The Trial of the Chicago 7 reminds us of the chant that arose from the Chicago protestors as the police descended upon them with batons and, some sources have indicated, gloved fists fortified with metal: “The whole world is watching.” At what point do you look away? The Trial of the Chicago 7 details events that happened more than 50 years ago. The time to look away is never. 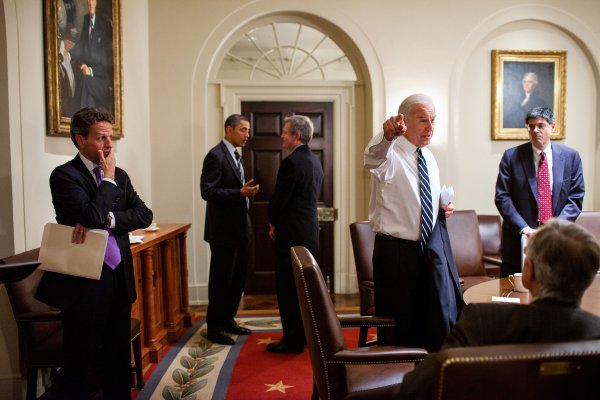 What Would a Biden Presidency Look Like? Obama’s White House Photographer Picks Six Photos That Offer Clues
Next Up: Editor's Pick