The first thing you notice about Cursed is how different it looks from most fantasy shows. It opens with a sweeping shot of a pristine lake surrounded by mountains. The camera dives underwater just as the silhouette of a woman plunges through the aquamarine surface, a ring of white light rippling around her. An arrow pierces her torso, fresh blood diffuses through the water and her breath is a stream of bubbles. The images are so mesmerizing, you might miss on-screen text that reads: “Before Arthur the King, the Sword of Power chose a Queen.”

So, yes, the hero of Netflix’s new Arthurian epic is actually a heroine: Nimue (Katherine Langford of 13 Reasons Why and Knives Out), the canonical Lady of the Lake, a young woman whose fearsome magical powers have made her an outcast in her village and driven a wedge between her and a mother she always seems to disappoint. If the absurd backlash other recent female-led entries in male-dominated genres (Wonder Woman, Star Wars: The Force Awakens) have faced is any indication, her gender may well become a focal point for those who hate the show as well as those who love it. And that would be a shame, because as empowering as Nimue’s journey may be for many female fans, there’s so much else about Cursed—its vibrant visual style very much included—that distinguishes it within the crowded field of fantasy series.

Developed in tandem with the illustrated YA novel that creators Tom Wheeler (The Cape) and comics legend Frank Miller (Sin City) published last year, the show begins with an unspeakable tragedy. Fresh off a blow-up with her mom, Nimue has tried and failed to catch a ship that would’ve taken her far from home. Upon returning to her village, with her loyal friend Pym (Lily Newmark) in tow, she discovers that a massacre is in progress. A band of Red Paladins—an evangelical army of human monks in crimson robes on a quest to wipe out Nimue’s pagan species, the Fey—have ransacked the peaceful community, burning homes, crucifying villagers and dragging away women to fates one can only imagine. (While more than one super-popular fantasy series seems to savor scenes of sexual assault, Cursed stays away from excessively graphic depictions.) Pym disappears. By the time Nimue finally finds her mother, the older woman is mortally wounded and clutching a sword wrapped in cloth. “There is something you must do. Take this to Merlin,” she breathes. “It’s all that matters now.”

It’s a strange request, considering that the Merlin (Vikings’ Gustaf Skarsgård) we meet in this story—besides being a washed-up, alcoholic wizard trying desperately to hide that he long ago lost his magic—is not exactly beloved among the Fey. So, if those last words supply the quest every fantasy narrative requires, they also leave Nimue with some puzzling questions. Why did her mother have this sword? How is she connected to Merlin? And why should Nimue trust someone so notoriously self-serving with this mysterious weapon (Arthur initiates, you know the one) that glows orange in her grip?

Elsewhere in this fictionalized medieval world, one that neither adheres too closely to the mythological record nor sanctimoniously subverts it, a political struggle is unfolding among the Red Paladins and various human kings, with loyalties constantly shifting and the future of the vulnerable Fey hanging in the balance. Arthur appears in the form of a young mercenary; as played by Devon Terrell, best known for his performance as Barack Obama in the 2016 biopic Barry, he’s a foil as well as a matinée-idol handsome love interest for Nimue. He’s a morally flexible “man-blood” outlaw bent on proving himself to be an honorable warrior, she is a noble, pure-hearted sorceress who has internalized the hatred that her community has always shown her and it’s up to them—with the help of with a rebel nun (Shalom Brune-Franklin of Bad Mothers), a wonderfully scrappy orphan (Billy Jenkins, The Crown’s young Prince Charles) and a few knights whose names might sound familiar—to save the Fey from genocide.

Before we go further, I should confess that I’m a fantasy agnostic. It’s a personal quirk, one of which I’m neither proud nor ashamed, that I’ve never had much interest in CGI monsters or drawn-out battle scenes or humanoids with pointy ears named Celebrimbor. Game of Thrones started to bore me after a few seasons; TV’s subsequent big-budget forays into the genre have mostly left me cold, from Amazon’s goofy Carnival Row and the mind-numbing See on Apple TV+ to Netflix’s own The Witcher and even, for all its handmade charm, The Dark Crystal. Cursed certainly isn’t free of the particular brand of silliness inherent to fantasy. Its sprawling cast of characters includes a Weeping Warrior whose eye makeup would be the envy of any black-metal singer and a Fey woman covered in feathers who resembles Schitt’s Creek diva Moira Rose’s character in The Crows Have Eyes III: The Crowening. Neither is this a show that can be said to “transcend” its genre, whatever that actually means. On the spectrum from prestige drama to comfort TV, it falls closest to the latter extreme.

The female lead surely helped, but a bigger reason that Cursed was the first fantasy series since Buffy the Vampire Slayer I’ve felt compelled to binge is that its version of Arthurian England is such a pleasant (if not always gentle) world to inhabit. In place of the washed-out grays and browns you see in so many representations of the real or imagined past, production designer Catrin Meredydd (Poldark) conjures a palette of saturated colors that bring to mind illuminated manuscripts: stunning emerald leaves, incandescent bursts of fire, skies so blue they’re almost psychedelic. Wheeler and Miller don’t trick viewers with multiple timelines—a frustrating technique that The Witcher and Westworld have used to gamify bland narratives. An effortlessly multiracial cast not only fixes a longstanding problem in fantasy (wizards and dragons are apparently easier to imagine in medieval Europe than people of color), but also helps to solve Game of Thrones’ constant “which thickly bearded white guy am I looking at now?” confusion.

It’s a fitting approach for a show that, while not as didactic as so much programming aimed at the YA set, is in large part about embracing difference. The Red Paladins’ war on the Fey is fueled by both humans’ refusal to live in a pluralistic society and the ignorant stereotypes each faction buys into about the other. Parallels arise between this conflict and systemic racism, religious discrimination, the refugee crisis—though the writers avoid glib or overdetermined equivalences. That some Fey can physically pass as human when necessary adds a resonant wrinkle.

Of course, Nimue is also different—a queen rather than a king, a misfit destined to lead a people among whom she lived her whole life as a pariah, a champion who carries with her the guilt of a powerful sorceress who abandoned her family and village when they needed her most, a multifaceted personality who is neither a stock hero nor a dark, self-loathing prestige antihero (Merlin, however…). Langford further distinguishes the character, balancing valor with petulance and baby-faced vulnerability in a performance that reminds me a bit of Jennifer Connelly in Labyrinth. Newmark, who plays a teen with girlfriend problems on Sex Education, is equally lovable in the role of Pym, a sweetheart healer who is adorably awkward around good-looking guys. The occasional cartoonish fantasy type aside, the people (of all species) in Cursed act more like human beings than like non-player video game characters or pieces on a chessboard.

Cursed may not be the most serious or profound program that TV has to offer, but you won’t find many shows more solidly built or satisfying. It’s wonderful to see a female fantasy hero whose chief character trait isn’t her sex appeal, whose quest is about more than just finding her one true love and, frankly, who isn’t constantly reminding viewers that she is an empowered woman. Rarer and more exciting still is that this fantasy drama understands that you can’t make good television in any genre without getting fundamentals like character, themes, storytelling and aesthetics right. 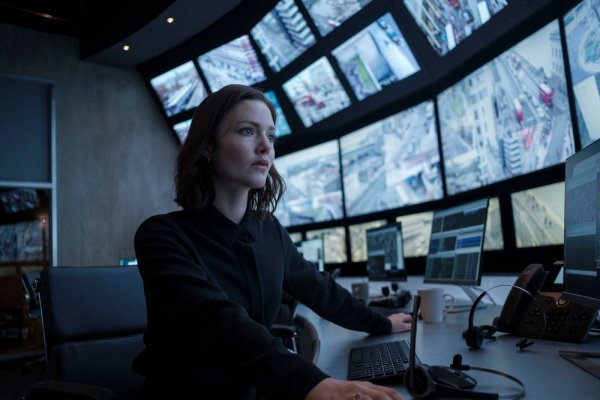 The One Must-See Peacock Original Show
Next Up: Editor's Pick