The True History Behind the Legend of King Arthur

When the movie King Arthur: Legend of the Sword hits theaters Friday, it will add the latest twist to a legend that’s been evolving for nearly a millennium. This version of the legend (starring Charlie Hunnam and Jude Law) pits King Arthur against his uncle, who seizes the crown until the famous episode in which young Arthur pulls the sword from the stone and proves he is the rightful king.

It’s a fanciful tale and one that’s been told many times, but where does it come from?

Some people do believe that King Arthur could have been a real person, but despite the occasional news story about an archaeological discovery that may provide clues, experts on Arthurian legend tell TIME that there is no evidence — no primary source from the time — to confirm that King Arthur was ever a real person.

What is possible, however, is that Arthur is based on a real leader from the 5th or 6th century. One promising theory points to a person known as “Riothamus” — an honorific for “supreme king” — who crossed the English Channel to fight in France. That’s something that Arthur also does in early texts. “It may be the closest we will come to locating a specific model for Arthur,” according to Norris J. Lacy, a medievalist and former international president of the International Arthurian Society.

If an “Arthur-type” figure were alive around that time, then he was probably a military leader reacting to the Anglo-Saxon invasion of Britain, a very violent time and a setting ripe for the creation of a legend. “There was no centralized government, and British life was essentially tribal,” says Lacy. “Rulers would occupy an area, often a hill, that would be easy to defend. Local wars were frequent, with much hacking and ‘smiting.’ Life being as uncertain as it was, and with society torn by war, strife, and sometimes famine and disease, it is not surprising that people would latch onto stories of a benevolent king or warlord who is intent on peace and prosperity.”

The first full “biographies” of Arthur don’t appear until the 12th century. Though they were sometimes styled as being based on a true story, they came out of a time when romance writing was all the rage, inspired by the rise of courtly love and chivalry.

The most famous accounts are History of the Kings of Britain, written in 1136 in Latin by Geoffrey of Monmouth, who claimed to have been translating an ancient British book on the kings of Britain that had been lost. The legend really took off in the 15th century with the release of Le Morte d’Arthur, with which Thomas Malory helped popularize, for the English-speaking world, courtly love and the iconic image of Arthur being the only one who can pull the sword out of the stone.

“There were powerful women in the courts of England and France who were patronizing poets and writers, and they may have wanted certain type of stories” about courtly love, says Chris Snyder, an expert on Arthurian legend and dean of the Shackouls Honors College at Mississippi State University.

On the other hand, no matter whether Arthur was a real person or not, the story’s mysterious origins add a level of intrigue that have helped keep the legend alive. “No one was keeping good records because they were trying to survive, and that’s one reason the legend became so popular,” says Dorsey Armstrong, professor of Medieval Literature at Purdue University and the Editor-in-Chief of the journal Arthuriana. “Something amazing happened, but we don’t have details, so you’re free to use your imagination.” 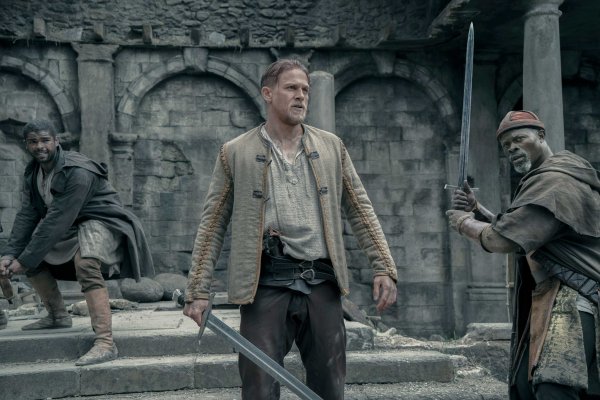 King Arthur as a Knockabout Guy
Next Up: Editor's Pick