Review: Smart, Perceptive Barry Shows a President in the Making

A movie doesn’t have to be a grand cinematic experience to open up your worldview. Vikram Gandhi’s Barry is, by almost any measure, a modest picture: In this fictionalized account of Barack Obama’s first term as a Columbia University student at in the early 1980s, a young newcomer named Devon Terrell plays the future 44th president, a bright young man who has every reason to feel at home in the world.

Yet he doesn’t, maybe because he’s not sure what world he can call home. Suitcase in hand, Barry shows up in New York—the New York of the ’80s, a wild, wild east of graffiti-laced subway trains and rough-and-tumble neighborhood basketball courts. It’s nighttime, and he can’t yet get into the apartment he’s rented with his roommate, Will (Ellar Coltrane). He figures he’ll walk around the Columbia campus, drink a little of it in—he’s happy to be there, and it’s an achievement for him. A university cop stops him and asks him for ID, but he doesn’t yet have his card. Barry is dressed neatly, his hair well groomed, but the cop isn’t buying any of it. He asks Barry to leave. As cautious young black men did then, and as they still do now, Barry maintains a respectful mien and complies immediately, even though he hasn’t even come close to breaking any laws.

For Barry, everything is a negotiation: In the Harlem apartment he rents with Will, the neighbors—locals, not students—test him. The tests might be simple, as seemingly straightforward as bumming a cigarette. But the terms of these transactions are both delicate and crucial. That’s what makes Barry such a sharp, well observed picture, one that’s not just one president’s story but also a sly examination of how race isn’t always the major thing that divides us. Your social class, your sex, your level of education, your sexual orientation, even just the way you carry yourself—any combination of these things can shift you, prismatically, into so many different categories that it’s a wonder any of us can say definitively (if inaccurately) who we really are.

Barack Obama, the man, and Barry, the character, are both case studies for that idea. Yet Gandhi, working from a script by Adam Mansbach, has made a film that’s more about people than about concepts. At its simplest level, Barry works as a story about a young man navigating a new, bewildering environment. In this particular case, we’re talking about a black man who grew up in Hawaii and Indonesia, who was raised by a single mother (played here as a vibrant, vaguely spacey presence by Ashley Judd), but who finds his Ivy League classroom to be even more jungle-like than the “urban” environment of his new Harlem neighborhood. At one point an entitled white dude in one of his classes—there were tons of these around in the early ‘80s, though, like the poor, they are always with us—angrily demands to know why black people always have to make everything about slavery. A white woman in the same class, Charlotte (Anya Taylor Joy), ends up becoming Barry’s girlfriend. and though she understands him better than most people seem to, the things she can’t quite carve a chasm between them.

Barry is the second movie this year to dramatize some angle of the president’s life. The first was Richard Tanne’s lovely snapshot Southside with You, in which Parker Sawyers and Tika Sumpter played young Barack and Michelle Obama, sparring through their first date and, as we’ve seen, living to tell the tale. Barry makes a smart companion piece to that film: As Sawyers did, Terrell captures the loping rhythms of Obama’s speech patterns, and the way, in telling a joke or making a declarative statement, he always seems to be just a little behind the beat, even though he’s really most likely thinking two beats ahead.

The movie’s most striking element is its treatment of Barry’s friendship with another young man of color whom he meets on the neighborhood basketball court, one he assumes is a Harlem local—they don’t talk, they just play ball. Then Barry learns that the guy, PJ (Jason Mitchell, the wonderful actor who played Easy-E in Straight Outta Compton), is actually a Columbia Business School student, one who grew up in the projects. He gives Barry, who has no sense of what the projects are like but wants to learn, a mini-tour of where he grew up. At one point PJ wonders aloud how he can be, in almost every way, so much like the people he grew up with, and yet so different, or at least so capable of forging a vastly different life. Barry offers no easy answers to that question, though it does sidle up to one possible key: Perhaps where you come from is less important than where you belong. 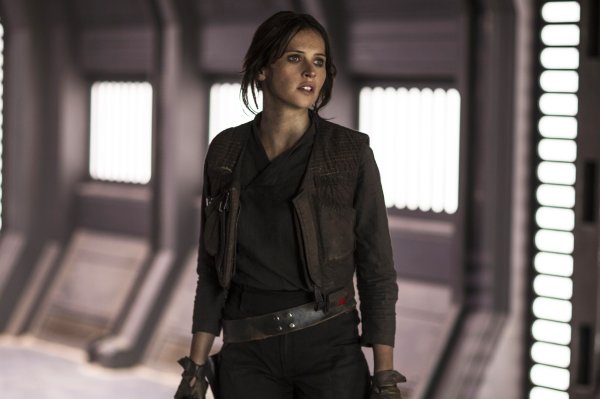 Everything You Need to Know About the Force in Rogue One
Next Up: Editor's Pick