Marketing people seem to think that audiences are always hungry for something new. But what if, without realizing it, they’re actually longing for something old? Writer-director Rian Johnson’s marvelous ensemble murder mystery—and comedy—Knives Out is based on one of the most timeworn conceits in the whodunit playbook: A bunch of family members and other associates gather in an old country house after a rich patriarch or dowager dies under mysterious circumstances. They may want to find out who’s responsible for the premature death of their loved one—but generally they’re more curious to find out how much they stand to gain monetarily from the death of said loved one.

That’s the basic plot of Knives Out, approximately as modern as the novels that Agatha Christie began writing roughly 100 years ago and continued to produce almost until her death, in 1976. But Johnson has taken the essential formula and made it his own. The picture is a delight, but even if it offers some nostalgic pleasures, it’s also attuned to all the worries and, worse, the thoughtlessness that characterize the modern world.

Crabby but sensible old codger Harlan Thrombey (Christopher Plummer) has amassed a fortune from his career as a prolific writer of mysteries. Then, on the morning after his 85th birthday, he’s found dead, apparently by his own hand. The last person to see him alive was the woman hired to care for him, a nurse named Marta (Ana de Armas), a Latina immigrant whose family depends on her job. Harlan had always adored Marta, and those in his immediate orbit claim to love her too: His daughter, crisp-mannered businesswoman Linda (Jamie Lee Curtis) and son, earnest but hapless Walt (Michael Shannon), sing her praises. Joni (Toni Collette), a somewhat shallow lifestyle guru who’s the widow of another son, also heartily approves.

Everybody loudly proclaims how great Marta is, though it’s questionable whether any of them have even gotten to know her. Then the police (played by LaKeith Stanfield and Noah Segan) show up to begin questioning the family. A celebrity detective with a buttery Southern drawl and the delectable name of Benoit Blanc (played by Daniel Craig, clearly having a blast) has also been brought in to oversee the proceedings. He watches wryly as the extended family—including Linda’s silky-slimy husband Richard (Don Johnson) and Harlan’s spoiled grandkid Ransom (Chris Evans)—spin their own narrative of the night’s events, tilting suspicion heavily toward Marta.

The plot of Knives Out is enjoyably, wackily serpentine. Even if you’ve already guessed who hasn’t dunnit, it won’t be easy to figure out who has. The movie’s pleasures lie in the way these characters, each of them well-defined, square off against one another even when they’re pretending to be on the same side. Knives Out is filled with deceit, greed, blackmail, overall unpleasantness—and it’s funny. One character, upon being introduced to Mr. Blanc, blurts out, “I read a Tweet about a New Yorker article about you!” There’s more wit here than in most of Johnson’s movies, although it’s worth noting that his last picture, the 2017 Star Wars: Episode VIII—The Last Jedi, was the best of the recent Star Wars movies, a franchise picture that felt as if it were made by a human being, not a committee.

Knives Out also shows the human touch: The ensemble cast is terrific—these actors make it look as if the movie were a lark to make. De Armas, who was surprisingly memorable as a hologram-wife in Denis Villeneuve’s Blade Runner 2049, brings sharply focused subtlety to her role here. In a movie filled with intentionally and often comically broad characters, she’s playing a person, not a type. Marta doesn’t radiate virtuousness as a character trait; kindness just finds its way out as she moves and breathes.

As entertaining as Knives Out is, there’s a lot rippling beneath the surface. One of its ideas is that immigrants, people who have chosen to live in America and have had to make sacrifices to do so, often make better Americans than people who were born here. And for all its clever, delightful trickiness, Knives Out is completely straightforward about one thing: It shows the utmost respect for science and for people who know what they’re doing. This is a movie in which expertise and good sense win the day; no one is rewarded for stupidity or cruelty. And in that sense, Knives Out isn’t just a beautifully made diversion. It’s also a utopian vision. 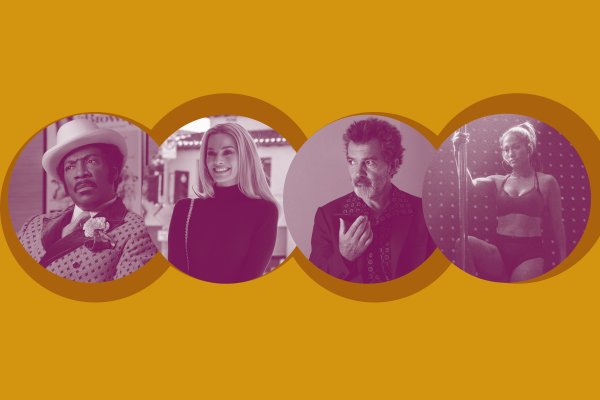 The 10 Best Movie Performances of 2019
Next Up: Editor's Pick