I’ve been thinking a lot about Beastmaster lately. In case you weren’t watching much trash TV in the early 2000s, Beastmaster was an extremely silly Australian fantasy series about a studly adventurer in a loincloth (Daniel Goddard) with an ability to communicate with animals, who wanders a quasi-primitive world defending the helpless. Loosely based on Don Coscarelli’s 1982 movie The Beastmaster—but, as far as I can tell, wholly unrelated to the Netflix reality competition Ultimate Beastmaster—the show endeared itself to connoisseurs of so-bad-it’s-good entertainment with campy special effects and ridiculous monsters.

It came to mind most recently as I was watching the first scene of The Witcher, another sword-and-sorcery epic whose eight-episode first season has just arrived on Netflix. In the beginning, all you see is a shaky-legged fawn stopping to drink from a murky swamp. Then, suddenly, an enormous arachnid-looking CGI creature with a face straight out of Scary Stories 3 bursts forth from the mire, struggling to fight off a warrior with luxurious Targaryen-Jimmy-Page hair who’s hacking away at its limbs. Reader, by the time I stopped laughing, I’d missed enough exposition that I had to rewind. I don’t know what reaction this cold open or the many similarly silly combat scenes that followed were supposed to elicit, but I’m guessing this wasn’t it.

The punchline isn’t that the The Witcher—a big-budget adaptation of novels by Polish author Andrzej Sapkowski that inspired the blockbuster Witcher video game franchise—is as shoddily constructed as Beastmaster. In fact, a creative team including alums of elaborate genre shows like The Terror and Black Sails yields costumes, backdrops and ghouls that look impeccable, if sometimes a touch generic. The thing is, a great fantasy show—one that gets viewers so invested we don’t crack up at the emergence of every bizarre creature—can’t thrive on high production values alone. Its plot, characters, dialogue and most of all its themes demand that same level of craftsmanship; the world it builds must be fresh, immersive, internally consistent, emotionally resonant. Like so many of its post-Game of Thrones competitors, The Witcher doesn’t rise to the challenge.

The memorably coiffed spider-slayer and hero of this disappointing tale is witcher Geralt of Rivia, played with understated Nordic stoicism by Superman Henry Cavill. (For those who don’t subscribe to Game Informer, witchers, as conceived by Sapkowski, are a waning race of mutants whose many special abilities make them ideally suited for their vocation as itinerant beast killers.) In the first few episodes, as he travels around a mysterious, medieval-lite landmass known as the Continent destroying various menaces, sleeping with various women and becoming ever more irritated with a pesky bard (Joey Batey’s Jaskier) who follows him around hoping to spread his legend, we learn that witchers are rumored to be devoid of all emotion. Whether or not Geralt genuinely feels feelings, he does have a moral code that prevents him from killing humans.

Parallel storylines follow two younger, female characters. Princess Ciri (bright-eyed newcomer Freya Allan), the flaxen-haired granddaughter of a warrior queen (British period drama standby Jodhi May, making the most of a tortured Cersei-meets-Daenerys role), is forced to leave behind her sheltered royal youth and sojourn in pursuit of safe harbor after an invading army lays siege to the family’s palace. The last main character, Yennefer (Anya Chalotra from Wanderlust), is the most—maybe the only—fascinating presence in early episodes. A pariah with pronounced physical differences and a supernatural ability to harness chaos, she acclimates to her powers at the craggy Academy at Aretuza, where girls train to become sorceresses.

It takes a while for viewers to learn how these characters are connected, via an exasperating Westworld-esque narrative knot that takes much of the season to unfurl. Meanwhile, creator, head writer and showrunner Lauren Schmidt Hissrich (Daredevil, The Defenders) has to fill in three detailed backstories, as well as sketch out several discrete races, locations and societies. Then there’s the history of the Continent, a landmass that was once the peaceful home of elves and other “elder races” but has been overrun with every conceivable type of monster—including humans—ever since a mysterious cataclysm dumped the contents of several different dimensions there 1500 years before the events of the show. All of this exposition would make for a tough to-do list under the best circumstances, but The Witcher heightens our confusion by fumbling details that would have helped it set a cohesive tone. Dialogue vacillates, from line to line, between theatrical fantasy-speak and modern colloquialisms (“Dragons are, in fact, a thing!”). At one point I realized the soundtrack had just leapt from wordless, moaning female vocals to jaunty medieval-style recorder to pounding, action-movie percussion in the space of a minute or two.

To some extent, this frenzied pastiche makes sense in the context of a show premised on the collision of multiple universes. It’s also typical of the current wave of maximalist genre television: Watchmen, American Horror Story, Good Omens, The Umbrella Academy. (It’s not so surprising that Schmidt Hissrich is also an executive producer of the latter series.) Sometimes the aesthetic works. But The Witcher doesn’t always seem to be in control of the collage it’s creating. At a very basic level, it’s hard to tell how earnest the show is trying to be and how seriously we’re supposed to take it. Just when a purposely goofy song from Jaskier (who comes off as a jarringly contemporary sort of hipster-poseur stock character) or a shot of the witcher in the bathtub—an inside joke from the game—has me thinking the series is actually supposed to be tongue-in-cheek, someone starts holding forth on love or destiny or elf genocide and the somber music kicks in and I’m back to being baffled. Comic relief is one thing. Fundamental inconsistency in the storytellers’ apparent attitude toward their story is another.

The Witcher isn’t quite the worst fantasy series of the year. That honor still belongs to Apple TV+’s boring, underwritten, intermittently creepy post-post-apocalyptic Jason Momoa vehicle See (though it’s worth mentioning that The Witcher’s bloody fixation with the female reproductive system and fondness for images of naked women screaming in agony does give that show’s ickiness a run for its ducats). But it does make a fitting capstone to a year that has brought us one disappointing would-be Game of Thrones successor after another. While the worst of these shows either strained themselves trying to make a statement (Amazon’s Victorian-ish Carnival Row) or had nothing of value to say (See), the best ones—HBO’s His Dark Materials, The Dark Crystal on Netflix—were lavishly designed children’s stories based on time-tested source material.

It isn’t easy building a fantasy world that not only hangs together, but also has the thematic depth to resonate with adult audiences that aren’t inherently drawn to tales of knights, princesses and fire-breathing dragons. (No judgment implied. We all have our preferred form of escapism.) Even Game of Thrones failed at this once the creators ran out of George R.R. Martin novels. Yet its legacy has turned out to be an endless stream of even weaker attempts to spin genre tropes into gold.

The trend isn’t entirely harmless, either. While fans of this stuff might happily chuckle and groan as they binge through The Witcher and its ilk, with costs for many of these series skyrocketing to $15 million per episode and beyond, expensive, nice-looking but half-baked fantasy is decimating original content budgets on every “prestige TV” platform you can think of. Netflix probably didn’t cancel One Day at a Time, Tuca & Bertie and The OA this year specifically in order to bankroll The Witcher, but it’s all the same balance sheet in the end. So say what you will about Beastmaster; at least it was cheap. 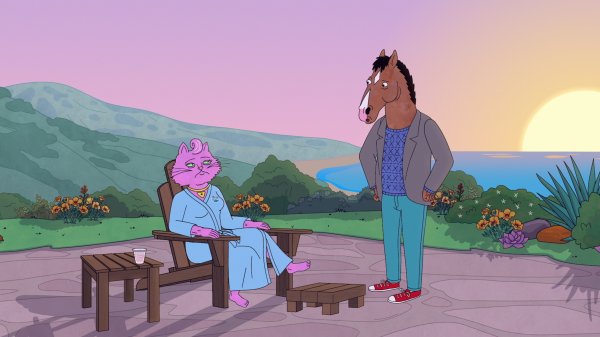 Adult Animation Is Pushing New Boundaries. A Look Inside Its Evolution from The Simpsons to BoJack Horseman
Next Up: Editor's Pick