The Hamilton Movie Is Finally Upon Us. But Is the Groundbreaking Musical Already Outdated?

In June 2016, the Broadway phenomenon Hamilton was filmed in all its syllable-spraying, suede-coat-shaking glory. Director Thomas Kail used Steadicams and camera cranes to capture composer Lin-Manuel Miranda’s definitive cultural artifact of Obama’s America: a multicultural, optimistic narrative in which an immigrant lifts himself out of poverty by “working a lot harder” and “being a self-starter” to become an American Founding Father.

Hamilton remains an astonishing triumph in so many ways: as a rebuke to a white-dominated theater world; as a genre-crossing musical monument; as a subversive interrogation of who gets to claim American greatness. It scored a record-setting 16 Tony Award nominations, set box-office records and reimagined theater in the 21st century.

But when the film drops on Disney+ on July 3, it will arrive into a world that has been transformed by the past four years. A very different President holds power; income inequality has widened; a pandemic has wiped out the life savings of thousands of Americans, souring the musical’s bootstraps premise. Over the past month, thousands of protesters have taken to the streets to excoriate America’s systemic racial inequities, many of which can be traced back to the men Hamilton celebrates through song and dance.

As the musical becomes available to a vastly wider audience—Disney+ has more than 50 million subscribers—Hamilton’s creative team hopes it will continue to serve as a symbol of resistance and an inspiration for young artists and activists of color. But others are skeptical that a musical about white slaveholders can speak to a moment in which long-held American narratives about opportunity and justice are being forcefully debunked. “Hamilton tells the history of how this white-supremacist country was created,” says Lyra Monteiro, a history professor at Rutgers University. “Our country has not been distorted since then. It’s been functioning as it’s supposed to be functioning.”

When Hamilton opened on Broadway in August 2015, it was embraced by audiences across the political spectrum: Barack Obama once joked it was the only thing that he and Dick Cheney could agree upon. Since the election of Donald Trump, its creators and fans have wielded the musical as both a symbol of and a tool for progressive change. The cast confronted Mike Pence in November 2016 when he attended the show; soon after, Miranda spun a song out of the show’s most applauded line, “Immigrants/ We get the job done,” in response to Trump’s escalating war on immigrants. At the Women’s March and other protests, quotes like “History has its eyes on you” and “Tomorrow there will be more of us” were held aloft on signs.

These mantras have resurfaced during the current wave of protests following the killing of George Floyd. “I have been overwhelmed and gratified at seeing lyrics popping up on signs all over the country,” Miranda says in an interview. “I’m excited young people are laying claim to the kind of country they want to live in.”

For others, however, the fundamental disconnect between the focus of these protests and Hamilton’s subject matter is getting harder to ignore. More and more Americans are coming to grips with the long tail of slavery and the ways in which anti-Blackness is embedded in American political, economic and social structures. Long-assumed truths are being interrogated, including the idea that America is a meritocracy or that the police protect all citizens equally. It’s not hard to trace these injustices back to the Founding Fathers: in June, statues of Thomas Jefferson and George Washington were toppled or vandalized. Revered works like Gone With the Wind that reinforce these narratives are being scrutinized with renewed focus.

Hamilton sits in the eye of this hurricane. “Since George Floyd, I wonder if its expiration date has already passed,” Monteiro says. “It’s hard to imagine people saying, ‘This is the musical of our moment,’ because the characters not only kept Black people in bondage themselves, but also designed a country that would preserve their system.”

Hamilton by no means ignores slavery: its third line describes enslaved people “being slaughtered and carted away across the waves.” Miranda says that the show “never backs away from a practice in which every character onstage is complicit.”

Critics like Monteiro disagree, arguing that the show deploys slavery in misleading ways. The institution is brought up to vilify the slave-owning Jefferson and lionize the abolitionist John Laurens, but is erased from the depiction of Washington, who owned, controlled or rented more than 300 slaves, and Philip Schuyler, who at one point was the largest slaveholder in Albany, N.Y. Renee Romano, a history professor at Oberlin College in Ohio, says the show also reinforces an oft-repeated narrative in which slavery was a uniquely Southern problem. “New York is depicted as the ‘greatest city in the world’—but when Hamilton lived there, 40% of households owned slaves, and they made up 14% to 16% of New York’s population,” she says. The city’s multi-cultural population at the time makes the fact that Hamilton contains no speaking roles for Black or Indigenous characters all the more glaring—and especially ironic given that the production was lauded for casting people of color to play white historical figures.

And then there’s the musical’s treatment of its namesake. While he is positioned as a “manumission abolitionist”—a perspective put forth by the historian Ron Chernow, whose 2004 Hamilton biography served as the basis for the musical—other historians contest this reading. There is evidence that despite Hamilton’s written misgivings about slavery, he arranged slave transactions and possibly owned slaves. As a signer of the Constitution, he also officially supported the three-fifths law that codified slavery. Miranda contends that the show grapples with Hamilton’s complicity in slavery through his silence on the subject in Act II. “After calling Jefferson out on slavery, Hamilton doesn’t do anything,” he says, adding, “I think that silence hits differently than it maybe did in 2015.”

To the writer Ishmael Reed, another shortcoming is the show’s neglect of Native Americans, who were being pushed west or murdered en masse by colonists at the time. “Native Americans have a different view of George Washington—he was known among the Iroquois as ‘Town Destroyer,’” Reed says. He also points to a letter Hamilton wrote in 1791, in which he cheerfully described the imminent attack of Kentucky settlers on a Native American community: “Corps of ardent Volunteers on their route to demolish every savage man, woman and Child.”

Last year, Reed staged an off-Broadway play, The Haunting of Lin-Manuel Miranda, in which he targets Hamilton’s historical inaccuracies and whitewashing. Reed says it’s all the more important to critique Hamilton as it becomes globally available, given how much impact it’s already had on historical discourse. “Hamilton has been deified because of this musical,” he says. “His tomb has become a shrine of worship.”

Kail, who directed the original Broadway production as well as the upcoming film, says that people who deify Hamilton are missing the point. “No one is presented as doing the right thing,” he says. “They did what they did, and it’s our job to look back and challenge it—and talk about how we can do better to try to make a country that represents and protects all of its citizens.”

In mid-June, the mayor of Albany signed an executive order to remove a statue of Schuyler, who is described in Hamilton as a “war hero” and a devoted patriarch to the Schuyler sisters, from the state capital’s city hall. Phillipa Soo, who played Schuyler’s daughter Eliza in the original Broadway cast, says she supports this re-evaluation. “People have a right to be displeased by that statue,” she says. “Maybe it’s time to rethink all public statues of oppressors and slaveholders—but that will be a very difficult national conversation.”

Hamilton has many other virtues that may protect it from a similar treatment. “It challenges some of the basic foundational pictures we have of our early nation,” Romano says. “That kind of symbolic work is important.” And it’s worth noting the role that Hamilton had in paving the way for even more daring, and critically lauded, Broadway productions like Jeremy O. Harris’ Slave Play, which lays bare the inter-generational traumas of slavery.

Miranda hopes that when people watch the film, they won’t glorify Hamilton but instead interrogate his shortcomings and “reckon with the sins of the origin” of the country. This moment, he says, has taught him that writing a musical is not enough. “We have to be out there in words and deeds, standing up and speaking up,” Miranda says. “That’s where I feel like I’m making up for lost time.” 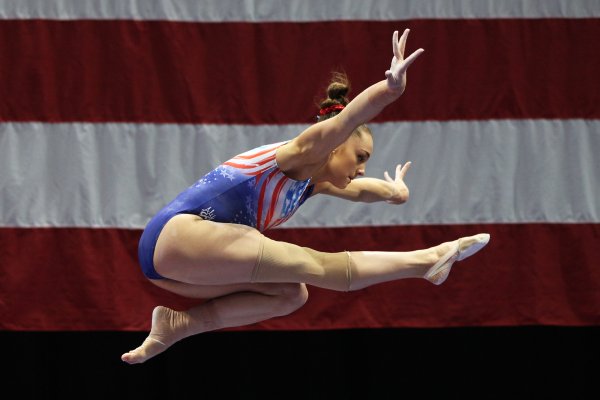 The Story Behind Netflix's Athlete A, a New Documentary About the USA Gymnastics Sex Abuse Scandal
Next Up: Editor's Pick