Julissa Arce's passports before she became a US citizen.
Morrigan McCarthy
Ideas
By Julissa Arce
Julissa Arce is the author of My (Underground) American Dream: My True Story as an Undocumented Immigrant Who Became a Wall Street Executive and Someone Like Me: How One Undocumented Girl Fought for Her American Dream. She is also the co-founder and chair of the Ascend Educational Fund.

I was 11 when I immigrated to San Antonio from Mexico. When I turned 14, my tourist visa expired and I became undocumented. After more than a decade without papers, I became a United States citizen on Aug. 8, 2014.

I naively believed that when I legally became an American, with a passport that proves I belong here, all the fears I had while living undocumented would be erased: fears of being separated from my family, of being detained, of being deported, of never being fully accepted in this country. But the election of Donald Trump, his racist and harmful lies about immigrants, the policies enacted by his Administration and the violence he has incited against brown people have removed the rose-colored glasses through which I once viewed this country. I now see America more clearly for what it is: a place where the color of your skin is the most important factor. And if you’re black, brown or any other nonwhite ethnicity, it’s the thing that can make you a target of hate.

Julissa with her brother after receiving her certificate of citizenship.
Morrigan McCarthy

Trump has spent his entire presidency building upon the anti-immigrant and anti-Latino rhetoric he put forth when he disparaged Mexicans as rapists and drug smugglers at his campaign launch. Last October, as thousands of Central American migrants made their way to our southern border to seek asylum, Trump tweeted, in part, “This is an invasion of our Country and our Military is waiting for you!” In May, while speaking of migrants during a rally in Panama City Beach, Fla., he asked, “How do you stop these people? You can’t.” One woman had an idea: “Shoot them!” she shouted. The crowd cheered and clapped. “That’s only in the Panhandle you can get away with that statement,” Trump responded with a smirk.

Trump claims that he doesn’t have a problem with immigrants so long as they enter this country the “right way.” In that same October tweet, he wrote, “Please go back, you will not be admitted into the United States unless you go through the legal process.” In reality, seeking asylum is a legal way to enter the country, but not only has Trump called our asylum laws “ridiculous,” his Administration has taken action to restrict the options for those seeking refuge. His treatment of migrants has already had deadly consequences with more than two dozen deaths in U.S. custody since 2017, including at least seven children. Now Trump’s rhetoric has turned deadly as well. On Aug. 3, a white nationalist opened fire in a crowded Walmart in El Paso as “a response to the Hispanic invasion of Texas,” he wrote in a manifesto prior to the shooting. The shooter didn’t stop to ask any of the 22 people he killed for their papers, or if they came to the U.S. “the right way,” or if they immigrated “legally.” That’s because it isn’t actually about legality. It is about our brown skin in America.

In May, while unveiling his immigration plan, Trump claimed, “Newcomers compete for jobs against the most vulnerable Americans and put pressure on our social safety net and generous welfare programs.” But a Department of Labor report conducted under the Bush Administration called the perception that immigrants take American jobs “the most persistent fallacy about immigration in popular thought.” And in 2014, the chief actuary of the Social Security Administration estimated that undocumented workers have paid $100 billion in Social Security taxes over the past decade. But it isn’t about the economy. It is about our brown skin in America.

Last month, Francisco Erwin Galicia, a Dallas-born teenager, was held in Immigration and Customs Enforcement (ICE) custody for more than three weeks, where he says he lost 26 lb. due to the poor conditions and was not allowed to shower. In March, Customs and Border Protection detained 9-year-old Julia Isabel Amparo Medina, a U.S. citizen, for more than 30 hours when she crossed the border at the San Ysidro port of entry to attend school. These are not isolated incidents. ICE has requested the detention of 3,076 American citizens from October 2002 to December 2018, according to Syracuse University’s Transactional Records Access Clearinghouse. It isn’t even about being born on American soil. It’s about our brown skin in America.

This isn’t the America that I was taught to love by my immigrant parents. The America that advertises the promise of physical and economic safety to people around the world. I have spent most of my life in this country. I have built a career, developed friendships and fallen in love here. As I commemorate 25 years in this country, and five as a citizen, I have come to understand that I was American even before I had a passport that says as much.

This brown skin will continue to glow against the darkness that has fallen in America because I also see the America that had hundreds of people lined up in El Paso to donate blood. I see Army Private Glendon Oakley Jr., who risked his own life to take several children to safety. I see the hundreds of people who have donated nearly half a million dollars to my scholarship fund to help undocumented immigrants attend college.

I see that America, and that is the one I will continue to fight for.

The original version of this story misstated the dates between which ICE requested the detention of 3,076 American citizens, according to Syracuse University’s Transactional Records Access Clearinghouse. The requests were made between October 2002 and December 2018, not 2004 and December 2018. 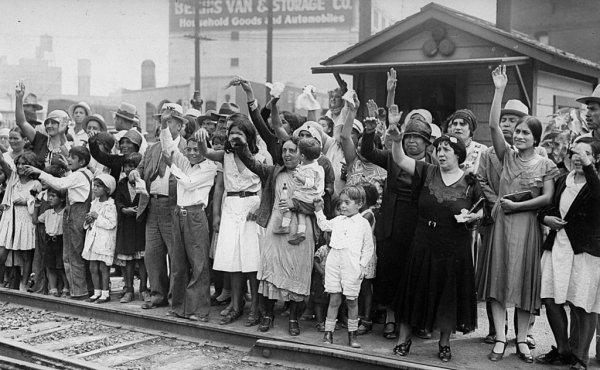 Citizens Facing Deportation Isn't New. Here's What Happened When the U.S. Removed Mexican-Americans in the 1930s
Next Up: Editor's Pick