'History Has Been Told About Men, for Men, by Men.' How One Historian Wants to Bring a New Perspective to George Washington

Washington Crossing the Delaware (by Emanuel Leutze, American, 1816 - 1868), 1851. The painting documents Washington's crossing of the Delaware River on the night of December 25-26, 1776, as part of a sneak attack at the Battle of Trenton during the American Revolutionary War. From the Metropolitan Museum of Art, New York. Oil on canvas.
GraphicaArtis/Getty Images
By Suyin Haynes

Few Americans are as surrounded by legend as George Washington is. The first President of the United States is renowned as a military genius who led his troops to victory during the Revolutionary War, as a boy who displayed an honest conscience in the famous fable of the cherry tree and as the owner of what may be history’s most famous set of false teeth.

Some of those legends land firmly in the realm of myth, and yet they have persisted in schools and in history books for more than two centuries. Now, they’re the inspiration for You Never Forget Your First, a new biography of Washington by historian Alexis Coe.

Coe didn’t set out to make Washington the subject of her second book, but was driven to the project by her frustration with existing tales about the Founding Father. “I am a lover of presidential biographies, and yet when I would read one on Washington, I just could never get close to him,” she says. She also noticed a trend in common interpretations of the primary sources on Washington’s life: as with so many long-established ideas about history, those readings had been developed through what she saw as a very male lens.

Take descriptions of Washington’s mother, Mary, who has gained a reputation as a controlling woman whom historians have described as “whining,” with little “maternal warmth.” Coe argues that in fact, Mary Washington shared the independent and industrious nature that distinguished her son, and that George was greatly affected by the death of his mother to breast cancer in 1789.

With an all-woman team having worked on You Never Forget Your First, from the illustrator to the editor, Coe hoped to show that there’s still something new to be said about George Washington — and to reach new audiences who might not have thought of themselves as typical readers of presidential biographies. “I thought it was possible. History has been told about men, for men, by men,” says Coe. “It was also an opportunity to represent and reinvent a genre that has been traditionally thought of as ‘dad history,’ and make it accessible to everyone.”

And right now, she says, that goal is key.

“I think that this is a time in which Americans in particular are really wondering about the presidency and wondering why it looks the way it does, and how certain precedents were formed,” Coe says. “That all goes back to George Washington; the entire office was created with him in mind.”

His choices still shape the presidency — for example, his then-surprising decision to stop at two terms would later be set into law — and his belief that partisanship would be the downfall of American politics, as expressed at his farewell address in 1796, proved prescient, Coe says.

“Fast-forward to 2020 and what is American politics dominated by? An American president inviting foreign influence, benefiting from foreign influence and asking a foreign country to get involved in American politics,” says Coe. “Historians hate to say, ‘What if this happened differently?’ or ‘If this person were alive today…’ — however, I say with total confidence that George Washington would absolutely hate Donald Trump.”

Which is not to say that Coe is strictly focused on Washington’s time in office. For example, using Washington’s letters of advice to his step-daughters, she compiles a series of love lessons from Washington translated into modern-day language — among them, “don’t be a reckless flirt,” “be realistic” and “make sure he’s really into you.” She also sprinkles in charts, representing everything from Washington’s frenemies to his military success rate. “I know it’s nice to take a moment and look at a list or look at a chart,” she says. “It’s okay to admit that that is how we read now, and to integrate that into a traditional historical narrative.”

The Washington Family by Edward Savage (American, 1761 - 1817); oil on canvas, 1789 - 96, from the National Gallery, Washington, DC. The Washington family sits in a room overlooking the Potomac River in Washington, studying an architectural plan for the future grand construction of the capitol city.
GraphicaArtis/Getty Images

And then there are those teeth. They were a reminder, Coe says, of the “sometimes horrifying” truths that can be found when historians interrogate why societies keep repeating myths they know to be untrue. The famous false teeth were not wooden, as has been popularly told; that’s not a new discovery, but the myth has stuck around. The teeth were in fact made up of ivory from different animals as well as human teeth. In fact, notes in Washington’s ledger indicated that he paid his slaves to provide him with their own teeth — although at well below the market value — but that complicated legacy may be hard for some Americans to reconcile with their image of Washington.

In recent years, more attention has been paid to the enslaved people whom Washington held as property. “When you actually look at what Mount Vernon was, in addition to a mansion house and a working farm, it was a forced labor camp,” says Coe. “We can call Washington the hero of the revolution, General Washington or President Washington, but we also should call him Master.” He inherited ten slaves from his father at the age of 11; that number grew to between an estimated 200 and 300 slaves at his Mount Vernon plantation in Virginia over the course of the Revolutionary War, and included well over 100 people by the time Washington died in 1799.

“If anyone could have changed the trajectory of black people in America, it was George Washington,” she adds. “Nobody had the stature that he had in this country, and had he emancipated his slaves during his lifetime — even in the final act, after he had left the presidency when he had basically nothing to lose — I think it had the opportunity to radically change this country, but he didn’t.” Although Washington set his slaves on the path to freedom in his will, the manumission didn’t take effect until after the death of his wife Martha, which would be in 1802.

It may sound difficult to reconciling the hero who was “first in the hearts of his countrymen” with the plantation-owner who denied freedom to the enslaved — and that, Coe says, gets to the heart of why seeing Washington from a new perspective is valuable. It’s obvious why the myths would stick so well, but also why it’s worth challenging them.

“The approach I take to Washington, and I hope all of my work, is that you hold two things at once,” says Coe. “He can be the man who liberated Americans from the British, and he can also be a man who is one of the greatest disappointments in this country [regarding slavery] — and I say that knowing that it’s a very controversial thing to say. He is emblematic of this country and all of its contradictions.” 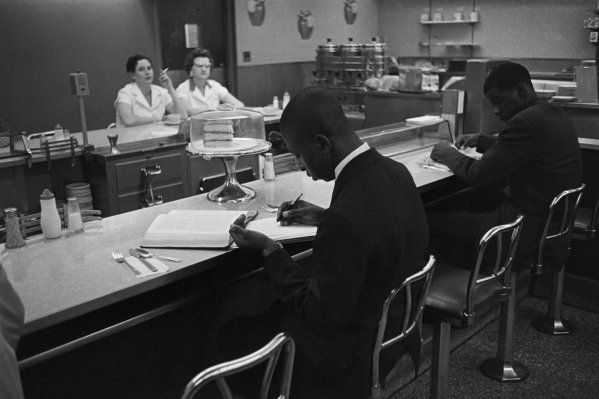 What People Still Get Wrong About Segregation
Next Up: Editor's Pick