Mike Pence Got Booed at Hamilton. That Was Only the Beginning

One of the songs in Hamilton says, “history has its eyes on you”—and when Vice President-elect Mike Pence saw the Broadway musical Friday night, the cast directed that message at him.

“We, sir, we are the diverse America who are alarmed and anxious that your new administration will not protect us, our planet, our children, our parents or defend us and uphold our inalienable rights, sir,” Brandon Victor Dixon, who plays Aaron Burr, said on stage after the show. “But we truly hope that this show has inspired you to uphold our American values and to work on behalf of all of us. All of us.”

Pence was booed when he took his seat at the theater. “There’s nothing to boo here, ladies and gentlemen. There’s nothing to boo here. We’re all here sharing a story of love,” Dixon said when he began to deliver the cast’s message at the end of the show. “Vice President-elect Pence, we welcome you and we truly thank you for joining us here at Hamilton: An American Musical.”

President-elect Donald Trump took issue with the cast’s message, calling it harassment and asking for an apology.

“Our wonderful future V.P. Mike Pence was harassed last night at the theater by the cast of Hamilton, cameras blazing. This should not happen!” he tweeted on Saturday. “The Theater must always be a safe and special place. The cast of Hamilton was very rude last night to a very good man, Mike Pence. Apologize!”

Since it first debuted on Broadway, political leaders have flocked to see Hamilton. The show became more political during the presidential campaign, hosting a fundraising performance for Hillary Clinton and creating a series of videos encouraging people to vote.

Lin-Manuel Miranda—the show’s creator and former star who has spoken out against Trump—said previously that “it would be fun to have Donald Trump see the show,” which tells the story of Alexander Hamilton, an American immigrant and founding father. The musical famously features a diverse cast, with men and women of color portraying people who were white.

One line of the show, in particular—”Immigrants: We get the job done”—caused the audience to erupt in applause Friday. Trump drew a hard line on immigration during his presidential campaign and has said he will deport up to three million undocumented immigrants.

At another point in the show, King George III sings, “When your people say they hate you, don’t come crawling back to me,” and blew a raspberry at Pence, causing more applause. 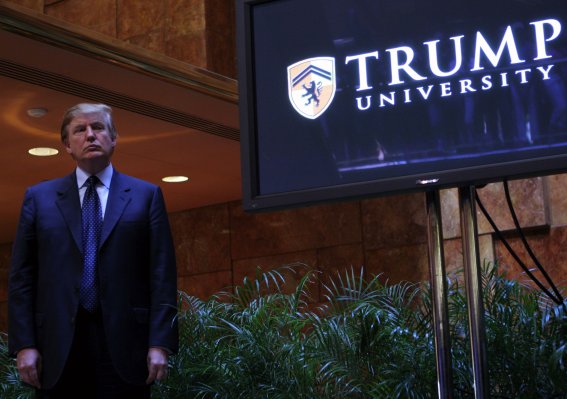 Trump Pays $25 Million to Settle Trump U Lawsuits
Next Up: Editor's Pick