If Joaquin Phoenix, Renée Zellweger, Brad Pitt and Laura Dern have any common sense, they are already practicing their acceptance speeches in preparation for the 92nd Annual Academy Awards this Sunday. Thanks to stellar awards season runs, those four actors virtually already have their statuettes in hand.

But several other races still leave plenty of intrigue—chief among them, Best Picture. Here’s where each of the most prominent races stand as we approach the 2020 Oscars.

This Best Picture race has been a turbulent one, with many would-be frontrunners burning bright and fading down the stretch. The film that seems to be peaking at the right time is 1917, whose Christmas Day release made it the last entry into the race (along with Little Women), putting it on the forefront of the minds of Academy voters. The (more or less) one-shot war movie possesses the right mix of technical virtuosity, gravitas and inspirational uplift that has typically fared well at the ceremony—and it recently won the top honor at the Producers Guild of America awards, long considered the most accurate Oscars bellwether. (In the last decade, all but two PGA winners also won Best Picture.)

But Parasite looms from close behind. No foreign language film has ever won best picture—but Bong Joon-Ho’s bloody, labyrinthine film just set a similar precedent as the first foreign language film to win the SAG Award for outstanding cast performance. The film received two raucous standing ovations at that ceremony—and the preferential ballot may help a film that was widely respected by a wide array of viewers.

While all of these performances, particularly Antonio Banderas’, drew acclaim, Joaquin Phoenix has this one all but locked up. His emaciated physical transformation shocked viewers; his soft-spoken, stuttering approach in the first half of the film inspired empathy; and his seething and grandiose soliloquies towards the film’s end made his Arthur Fleck one of the most compelling villains since Heath Ledger occupied the same role. This is Phoenix’s fourth nomination over two decades. After showing a sometimes frightening level of commitment to his craft, he’s ready to take home a piece of hardware.

Zellweger, like Phoenix, has swept the major precursor awards (Critics’ Choice, Golden Globe, SAG Awards and BAFTA), putting her in pole position to win her second Oscar. “It’s a wonderful performance, as rich and alluring as a length of golden brocade, but one with appropriately ragged edges,” Stephanie Zacharek wrote of her performance in Time.

Laura Dern will likely win for her clipped heel turn as a cutthroat lawyer in Marriage Story. But as many on Twitter have argued, it wasn’t even her best role this year. As Marmee in Little Women, Dern anchored the film with her warm compassion and wrenching grief. Perhaps the bulldog lawyer was a type all too familiar and impossible for Hollywood voters to resist. But several of the other nominees—especially Florence Pugh and Dern herself—took on more difficult roles with nuance and grace.

Brad Pitt in "Once Upon a Time in Hollywood"
Andrew Cooper—CTMG, Inc.

Tom Hanks, A Beautiful Day in the Neighborhood / Anthony Hopkins, The Two Popes / Al Pacino, The Irishman / Joe Pesci, The Irishman / Brad Pitt, Once Upon a Time in Hollywood

All of the actors in this category have an acting Oscar except for Brad Pitt—but that will change on Sunday. Pitt exudes old-school Hollywood charisma and grit as stuntman Cliff Booth in Tarantino’s film; he has memorable tête-à-têtes with Margaret Qualley, Leonardo DiCaprio and Bruce Dern and lends a comic lightness to the film’s brutal climax.

In this absolutely stacked category, two Hollywood legends—Martin Scorsese and Quentin Tarantino—have somehow become after-thoughts. Mendes is roaring into the Oscars with all of the momentum, having racked up award after award, including most recently a BAFTA for best director. But Bong has practically become the protagonist of this awards season for his roguish charm and effortlessly quotable soundbites; producer Janet Yang says that at the Oscars luncheon, he received “louder and longer applause than anyone.”

This race feels similar to last year’s, when an international heavyweight with a daring foreign language film (Alfonso Cuarón) won Best Director, while a more middle-of-the-road historical film (Green Book) won the top prize. Given that the Best Picture and Best Director have split up three of the past four years—and the fact that many critics were particularly impressed by Parasite’s exquisite attention to detail—Bong could easily walk away with the individual trophy.

After coming away empty-handed 13 times, Roger Deakins finally won his first Oscar in 2017 for Blade Runner 2049. It seems all but assured that he will win his second for 1917, a technical masterpiece which swoops in and out of trenches and brings a harrowing beauty to the grisly and desolate battlegrounds of World War I.

How to Train Your Dragon: The Hidden World / I Lost My Body / Klaus / Missing Link / Toy Story 4

The folks at Pixar probably thought they had this one locked up the minute they finalized the last edit—after all, Toy Story is a beloved multigenerational franchise with undeniable name recognition. But reaction to the series’ fourth installment wasn’t quite as euphoric as it had been for the first three, and recently the upstart Klaus, which re-envisions Santa Claus’ origin story, has been drawing plenty of goodwill both online and in prestigious circles. The film won seven Annie awards (the Oscars equivalent for animated films) as well as best animated feature at the BAFTAs. It’s tough to bet against Woody and Buzz, but an upset could be in order.

American Factory / The Cave / The Edge of Democracy / For Sama / Honeyland

This formula seems simple: when voters see the name Obama, they’ll vote American Factory. (The former President and First Lady served as producers on the project.) It doesn’t hurt that the documentary is a probing and comprehensive dive into the shifts happening in the Rust Belt thanks to globalization; the film illustrates the larger forces at work while poignantly dramatizing the plight of the individual Ohio workers left behind by the whims of mega-corporations.

Little Women may be one of the best known and most adapted novels in the American canon, but Greta Gerwig’s adaptation still surprised viewers. While Gerwig faithfully kept much of the book’s dialogue verbatim, she scrambled its linear timeline, reassessed the character of Amy—often previously cast as a bratty foil to the hero Jo—and slyly updated Jo’s ending to match Louisa May Alcott’s own story.

In her TIME review, Stephanie Zacharek called Gerwig’s adaptation “respectful and invigorating”; a “reimagining that reaches out to young people making their way in the world today even as it’s true to the manner in which Alcott herself—a woman writer in a field ruled by men—had to push her way forward.” Many felt that Gerwig was snubbed in the director category, but she may still walk away with her first Oscar Sunday night.

The two frontrunners, Once Upon a Time and Parasite, have much in common: they shuttle between haves and have-nots, linger lovingly over cityscapes (Los Angeles and Seoul, respectively) and lull viewers into a sense of security before exploding with violence.

Tarantino has won this twice before, but Once Upon a Time is not as tightly constructed as Pulp Fiction or Django Unchained; it prefers to set moods and build character portraits as it meanders across L.A. Parasite is the more streamlined work, with no wasted dialogue. And Bong just won this same prize at the BAFTAs, which share many voters with the Oscars.

Hildur Guðnadóttir has had a big year—she scored not only the billion-dollar Joker but also HBO’s acclaimed Chernobyl. Her experimental score of the latter breathes life into both sides of Arthur Fleck’s mania—his calm reveries as well as his acidic rage.

Everybody loves Elton John, but does everyone really love this particular song? His drab mid-tempo offering, which plays during the credits of Rocketman, sounds even more ordinary following two hours of stone cold classics. “Stand Up,” on the other hand, meets the tall order of capturing the conviction and fearlessness of Harriet Tubman—and is sung flawlessly by Cynthia Erivo, one of the best singers in the world. If she wins, Erivo will join the exclusive community of EGOT winners—people who have won an Emmy, Grammy, Oscar and Tony—and, at 33, she’d be the youngest person ever to achieve it. 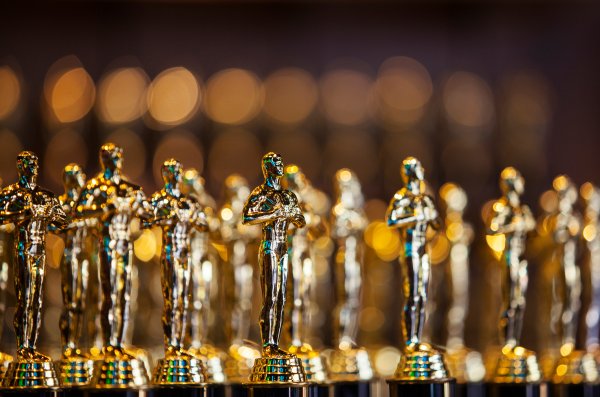 Here's Everything You Need to Know About the 2020 Oscars
Next Up: Editor's Pick