1917 Is a Movie About the Horrors of War, Told With a Devotion to Beauty and Life

A good movie can be built from any number of components: a great story, distinctive visuals, a haunting score. But sometimes a face can take you 90 percent of the way. And although Sam Mendes’ extraordinary World War I drama 1917 is notable for the technical feat of its cinematography—Mendes and director of photography Roger Deakins have constructed it to be perceived as one unbroken shot—the true key to its effectiveness is the face of one of its central actors, George MacKay. MacKay plays a young British soldier, Schofield, who just happens to be nearby when one of his mates, Blake (Dean-Charles Chapman), accepts a dangerous assignment: The two must cross enemy lines to deliver a message to British troops on the other side by the next day’s dawn. Blake has a personal stake in the assignment: he has a brother among the troops at risk. Schofield doesn’t think the mission is such a good idea—but he sticks by his friend anyway.

The first thing that strikes you is how young these two are, barely out of boyhood. That’s true of nearly all war pictures, though those set in World War I—including this one—come with a particular, sorrowful sting. The First World War, one of the deadliest in modern history, came with no satisfying “The bad guy is dead!” ending. The losses were devastating for all countries involved, certainly for Great Britain. And if the imagery we associate with this war are bleak enough—the dank trenches, the dead horses, the ghostly barbed wire—the rows of grave markers in its aftermath, most of them guarding the remains of very young men, make for an especially somber end note.

Mendes captures all of that tense sadness in 1917, yet the film—which he co-wrote with Krysty Wilson-Cairns, and which is dedicated to his grandfather, a veteran of the war—also has a glorious, pulsing energy. It’s largely about death, or the risk of death, but in addressing some of the horrors of this particular war, Mendes has made a film that feels wholly alive. It’s a carefully polished picture, not one that strives for gritty realism. But its inherent devotion to life and beauty is part of its power, in the same way that Lewis Milestone’s quietly wrenching 1930 All Quiet on the Western Front—a story not about the experience of English soldiers but of German ones, adapted from Erich Maria Remarque’s novel—stressed that individual moments of life, grasped and held tight, are the only real protection we have against the pointlessness of war.

1917 opens in a moment of repose: Blake and Schofield are lounging around a tree, reveling in the ultimate luxury of killing time, when they’re informed that they’re to report for a special assignment. (The general who gives them the order is a businesslike but clear-eyed Colin Firth—he looks from one lad to the other as if fully aware of the likelihood that neither will make it back.) Further afield, the Germans have allegedly retreated, and two English battalions, a total of some 1,600 men, have advanced and are ready to strike, hopeful that they can bring swift end to a war that has already been raging—and killing millions—for three years. But the retreat is a ruse. The Germans are now lying in wait for their prey. They have also, craftily, cut all lines of communication, so the message must travel in person, and it’s Blake and Schofield who must carry it.

Deakins’ camera follows this duo as they leap out of the bleak safety of the trenches and embark on a bone-rattling trek across no-man’s land. They pass dead horses ringed by haloes of flies, and the corpses of fellow soldiers, twisted and deformed in their shallow graves of mud. Schofield gallantly holds back a loop of barbed wire so that Blake might pass through; the thorns spring to life and pierce his hand. Shortly thereafter, he’ll lose his footing in a mud crater, instinctively breaking his fall with the wounded hand—it lands in the festering gut of a swollen corpse, a sick moment of slapstick. All of this is within the movie’s first 15 minutes or so, and you may be looking ahead to all the horrors that will surely follow, wondering if you’ll be able to bear them.

But Mendes knows what he’s doing. There are moments of horror and deep sorrow in 1917, including a scene of brutality followed by an aching loss—that this loss results from an act of compassion makes it even more cosmically cruel. This event occurs roughly a third of the way into the movie, and you feel its punch, hard. Yet Mendes’ aim isn’t to serve up relentless punishments for two hours. (The picture is just the right length for the story: You don’t need an epic runtime when your movie has an epic spirit.) Mendes moves his heroes through a field of chopped-down cherry trees, desolate in their lifeless beauty—though even then, there’s the promise that, after the stones have sunk into the ground, even more trees will pop up in their wake. There’s a deserted farmhouse whose environs are populated by one lonely cow. Someone—who?—has recently milked her, and Schofield, after testing to make sure it’s not poisoned, dips his hand in for a drink of the sublime. He’ll be shot at; he’ll have to silently kill a young German soldier with his bare hands. But Mendes is so careful with the story’s pacing that you never feel assaulted, even if you do feel the weight of every act.

And even if you fear the one-shot-effect might just be a gimmick, in Deakins’ capable hands, it works. The camera’s movement has its own silent dignity; there’s an overarching calmness to the film, even in its most intense moments. Deakins’ and Mendes’ sense of color may be even more wondrous than their one-shot feat: The ruins of a village lit by mortar explosions are bridal white. And if the colors of World War I are mostly brown, Deakins’ camera finds the stark beauty in its myriad hues, from dusky olives to soulful ochres.

The actors, moving through this world of terror with no glory, are terrific: Chapman’s baby face is sullen one moment, radiantly good-natured the next. Andrew Scott shows up for a few brilliant moments as a deadpan, disillusioned lieutenant. But it’s MacKay’s face that haunts you after the screen dims. It’s not a modern face, but a 1917 face, that of a young man who’s staunch in doing his duty but who has no idea what he’s gotten into. His ears stick out a little; he doesn’t smile much, but then, he can’t find much cause to. This is a face you might see inside an antique silver locket, the face of someone who’s loved very much, but who is very far away, and in danger. Through the space of the movie, we’re his guardians, keeping watch over him as well as we can. That he inspires this care in us is the key to the movie. He’s one of millions, but for the duration of 1917, he’s our boy. 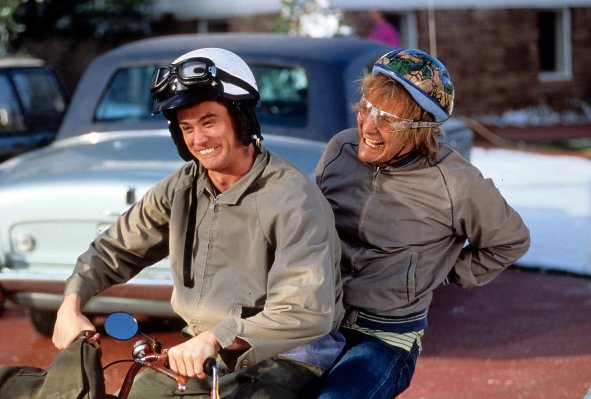 25 Years Later, Dumb and Dumber Is More Than Just the Gold Standard for Toilet Humor
Next Up: Editor's Pick