Dolemite Is My Name: Netflix; Once Upon A Time In Hollywood: Sony Pictures; Pain and Glory: Sony Pictures Classics; Hustlers: STX
By Stephanie Zacharek

Actors are the lifeblood of cinema. An amazing performance can at least partially redeem a terrible film, or nudge a good film toward perfection. Below are 10 of my top performances of the year, a mix of lead and supporting—because the sorcery a good actor can pull off can’t be defined by the number of lines he or she has.

Stewart is a marvel as Jean Seberg, the American-born actor who became a huge French star—and whose troubled life was in all likelihood cut short by the FBI’s hounding of her in the late 1960s and early ’70s. Opening herself up to this sad, lost woman, Stewart allows her spirit to rush in, filling every channel and vein. Her Seberg is not just a tragic figure but a woman full of life, restored to us for just a few precious hours.

9. Eddie Murphy, Dolemite Is My Name

Murphy brings the spirit of Blaxploitation underdog Rudy Ray Moore to life, with tell-it-like-it-is radiance. His timing is, as always, cobra-strike precise; his smile is both conspiratorial and expansive. And, as an aging actor grabbing at what he knows is his last chance, he’s deeply moving.

8. Margot Robbie, Once Upon a Time … in Hollywood

In this ode to the Hollywood that was, Robbie plays a dream version of murdered actor Sharon Tate, and she’s the movie’s lifeblood—not an elusive vision projected on a screen but a young woman we’re granted the pleasure of knowing. It’s she who’s living—we, the unlucky ones, are only dreaming her.

Pesci often plays the hotheaded clown, but he goes much deeper as mob boss Russell Bufalino in The Irishman. Pesci’s Russell, crumpled and bitter, longs for tenderness even as he shuts it out. It’s as if he’s willed the deep creases on his face into being, the better to obscure what’s going on behind his eyes—he’s an apple-head doll of rage. And still, he breaks us.

Judy Garland, beyond great and also too much, is the eclipse you can’t help looking at. In Judy, Renée Zellweger is the piece of glass that allows you to gaze at her directly, to see her in new ways but also to fine-tune all that you already know. And she sings, too. It’s a wonderful performance, as rich and alluring as a length of golden brocade, but one with appropriately ragged edges.

Schoenaerts, one of our finest and perhaps most underappreciated actors, plays a closed-off prison inmate who’s redeemed by training a wild horse. With just a glance, he shows us a lifetime’s storehouse of resentment, or deep-rooted wariness giving way to trust—and all opposite an equine co-star whose soulful eyes might have otherwise stolen the show.

Taylor Russell’s Emily—the kid sister of a star athlete gone wrong—is the first character we see in Trey Edward Shults’ lacerating family drama, Waves. Then we nearly forget about her, until she re-emerges in the movie’s superb second half. Russell’s performance is like a rush of wind on a dry, hot day, the blessing you didn’t know you needed.

In this portrait of a brutal divorce, there’s a sequence in which Adam Driver’s Charlie hurls cruel words at his soon-to-be-ex-wife, played by Scarlett Johansson. And then, horrified, he sinks to the floor, folding his mighty frame into the tiniest jackknife. With that single, compact movement, Driver makes us feel the weight of living with every heedless thing we’ve ever said or done.

Banderas has been appearing in Pedro Almodóvar’s films since the early days of his career. How can so many years have passed? In Pain & Glory, he gives an aching, unguarded performance as a successful filmmaker nearing the tail end of his career, graying and anxious and hampered by severe pain. Banderas gives us a glimpse into what can happen to any of us as we age. He also pays a blood-brothers tribute to Almodóvar, a man who has brought great joy and a freeing sense of abandon to his audience, making us feel young even if we’re not. 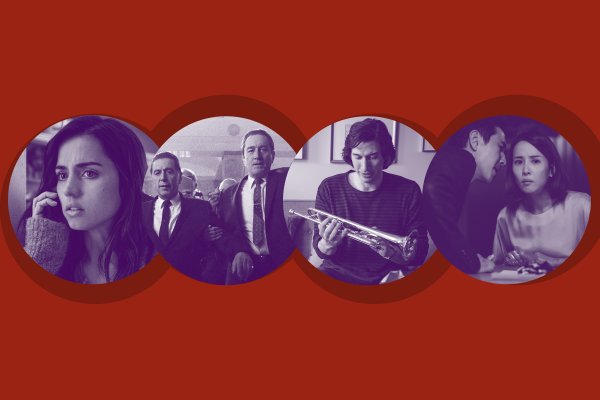