Judy Garland was great. But watching footage of her is almost too much to bear unless you’re ready to open a figurative vein, to let feelings you might not want to acknowledge flow freely through the spigot. Teenage Judy, the Judy of The Wizard of Oz and “Over the Rainbow,” had a hopeful tremulousness that must have been truly affecting even in 1939. But watching that Judy as an adult—knowing what we do of the way studio head Louis B. Mayer so heinously manipulated her, of the pills that were stuffed into her to keep her going, of all the food she was never allowed to eat—is so piercingly intense you almost want to avert your eyes. And to watch later Judy, the Judy who could wow audiences with her go-for-broke live or televised shows—or alienate them by wobbling through performances in a drug- and alcohol-fueled stupor—is to see that early hopefulness distilled into a highly concentrated elixir of self-abnegation, a liqueur you could almost get drunk on. Forget “The Man That Got Away”; as a performer, she always seemed to be drifting further and further away from us, even as, in her perfect, complete neediness, she reached out into the darkness to hold us close.

Garland, beyond great and also too much, is the eclipse you can’t help looking at. In Judy, directed by theater veteran Rupert Goold, Renée Zellweger is the piece of glass that allows you to gaze at her directly, to see her in new ways but also to fine-tune your understanding of all the things you already know. Zellweger as Judy cuts deep but also allows us to creep closer—to see a woman who had terrible luck and even worse taste in men, but who also knew, in her stronger moments, how to have a good laugh about it all. Zellweger paints shadows of nuance into her portrayal of a performer who invites easy caricature. And she sings, too. It’s a wonderful performance, as rich and alluring as a length of golden brocade, but one with appropriately ragged edges.

Judy focuses on Garland’s five-week sold-out run at the London club Talk of the Town in 1968, the year before her death at age 47 from an accidental overdose of barbiturates, though it’s dotted with flashbacks that show how this smashing but fragile performer had been shaped into the show-biz mold from her youth. (The Wizard of Oz-era Judy is played, with a touching sense of naive receptivity, by Darci Shaw.) In an early scene, the middle-aged Garland—dressed in post-stagewear finery, a shimmery floral trouser suit accessorized with sparkly earclips that seem permanently affixed to her lobes—tries to hustle her two younger children, Lorna and Joey Luft (Bella Ramsey and Lewin Lloyd) into the luxe hotel where she’s been keeping a suite. The desk manager won’t release the key; she hasn’t paid the bill. She cajoles and threatens, but she can’t pull this one off: She packs the kids into a car and drops them off at the home of their father, her ex-husband, Sid Luft (Rufus Sewell), who seems none too happy to see them, though he’ll eventually sue for custody.

Desperate to earn enough money to give her children a stable life, Judy signs on for the London shows. The club’s manager, Bernard Delfont (an elegant, watchful Michael Gambon), knows he’s got to keep her in line; he’s engaged a bright young woman, Rosalyn (Jessie Buckley, in a perceptive, understated performance), to look after her, and Judy alternately bristles and blossoms under her care: Even in middle age, she desperately needs a mother, yet she resists any kind of mothering control.

Judy sweeps in, giving terrific shows some nights and making an incomprehensible mess on others—and sometimes failing to show up at all. Unable to sleep, her days and nights jumbled by drugs, she pads around her fancy hotel in a silk dressing gown, fidgeting with a cigarette lighter: Her nerves seem to be pulsing on the surface of her skin. In the midst of her club engagement, she’s both jangled and entranced by the arrival of a groovy swain, Mickey Deans (Finn Whitrock), 12 years her junior, whom she’d met earlier in Los Angeles. Mickey promises her the moon, a thing he can’t possibly deliver. The two marry, but the thing falls apart, and Judy does too. Her ups and downs are beyond extreme, but swinging between those two poles also seems to somehow hold her together.

Goold, working from a script by Tom Edge (which was adapted from Peter Quilter’s stage play End of the Rainbow), soft-pedals some of the more horrific elements of Garland’s life and behavior. This is less a straight-up biopic than a meditation on the texture of one vibrant but troubled life; Zellweger goes just far enough into Garland’s pathology of suffering without fetishizing it.

And to watch her as Judy on a good night is glorious. She captures the essence of Garland’s walk, her mode of movement: It’s as if her limbs were attached to her torso with wooden pegs—she’s a strange and elegant puppet. Zellweger does her own singing, approximating the sandy grain and zipline phrasing of Garland’s voice circa the late 1960s in songs like “By Myself,” and “Come Rain or Come Shine.” Her gestures are big; her eyes, shiny, dark and hungry, seem even bigger. Zellweger captures the way Garland’s showmanship seemed fed by her audience’s blood—she couldn’t get enough of it, yet she seemed to give even more in return. No wonder she wore herself out. Judy is a portrait of a woman who fell apart before our eyes, but even in the midst of her cracking into pieces, she was so dazzling we couldn’t turn away. It hurt to look at her. It hurt more not to. 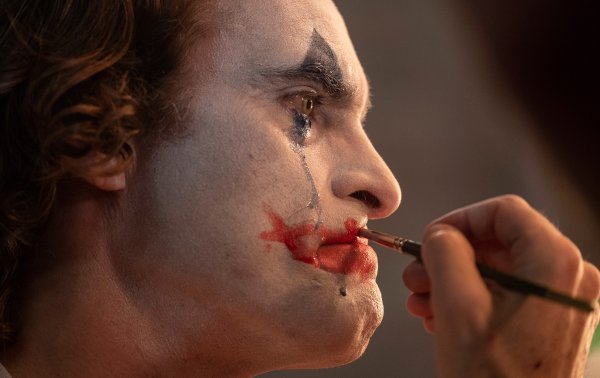 What to Know About the Controversy Surrounding the Movie Joker
Next Up: Editor's Pick