2020 Democrats Will Face Off on One Stage for the First Time Tonight. Here's Everything to Know About the September Debate

Tonight, for the first time, the top-polling candidates in the Democratic 2020 presidential primary will face each other on the same party-sanctioned debate stage.

The third Democratic presidential primary debate — which ABC News will host in partnership with Univision — will take place in Texas, and last for three hours. Because only 10 candidates hit the Democratic National Committee’s polling and fundraising thresholds by the Aug. 28 deadline, it will span only one night for the first time.

Dynamics from the previous debates may also remerge. Harris criticized Biden on race in the first debate, and faced attacks on her history in law enforcement during the second debate. Warren and Sanders, who represent a similar left-wing of the party, haven’t attacked each other yet but may feel pressure to as the field slims down.

Following the threat of Hurricane Dorian on the Southeastern seaboard and a spree of mass shootings in August (53 people died in mass shooting in the U.S. in August alone), climate change and gun violence will likely be discussed. The usual hot-button Democratic topics of health care, immigration and the economy will also surely come up.

Here’s everything you need to know about the September Democratic Debate.

When is the debate?

The third Democratic presidential primary debate will take place on Thursday, Sept. 12, in Houston, Texas. ABC News in partnership with Univision will host the debate at Texas Southern University, a public, historically black university. It will air from 8 to 11 p.m. EDT.

The candidates will stand on stage based on their polling averages, with the higher polling candidates near the center of the stage.

Which candidates qualified for the September Democratic Debate?

To qualify, each candidate needed to have received 2% or more support in at least four DNC-approved polls released between June 28 and Aug. 28. The candidates also needed at least 130,000 unique donors, with 400 unique donors per state in at least 20 states. The donations must have been received by 11:59 p.m. Aug. 28.

Here’s who made the cut:

Biden represented Delaware in the U.S. Senate from 1973 to 2009, and served as President Barack Obama’s Vice President for two terms.

Booker is the first African American Senator from New Jersey and previously served as mayor of Newark, N.J., from 2006 to 2013.

Buttigieg was an intelligence officer in the U.S. Navy Reserve between 2009 and 2017, and has served as mayor of South Bend, Ind. since 2012. If he wins the primary, he would be the first openly gay presidential nominee for a major political party.

Castro served as the Secretary of Housing and Urban Development under President Obama between 2014 and 2017, and previously was the mayor of his hometown of San Antonio, Texas, between 2009 and 2014.

Harris came up through California politics, serving as the District Attorney of San Francisco from 2004 to 2011 and the Attorney General of California from 2011 until 2017. She has been California’s Junior Senator since 2017.

Klobuchar has represented Minnesota in the Senate since 2007, and previously served as the County Attorney for Minnesota’s most populous county, Hennepin County, from 1999 to 2007.

O’Rourke represented Texas’s 16th congressional district, which includes his hometown of El Paso, Texas, from 2013 to 2019. In the 2018 midterms, he ran unsuccessfully for Republican Ted Cruz’s Senate seat.

Sanders served as Vermont’s sole congressional representative from 1991 to 2007 and Vermont’s junior Senator since 2007. A self-described democratic socialist, Sanders ran for the 2016 Democratic nomination and lost to Sec. Hillary Clinton.

A former law professor specializing in bankruptcy law, Warren has served as Massachusetts’ junior Senator since 2013.

Yang is the founder of Venture for America, a nonprofit and fellowship focused on creating jobs in cities across America, and advocates about the threat of automation.

Where will candidates stand?

In order of left to right, the candidates will stand as follows: Klobuchar, Booker, Buttigieg, Sanders, Biden, Warren, Harris, Yang, O’Rourke and Castro.

The order was based on polling averages from the last 10 polls that factored into the qualification for the debate. Candidates with the highest polling average were placed in the center.

Who didn’t qualify for the debate?

Before the Aug. 28 deadline, three presidential candidates had met the donor requirements but hadn’t quite made the polling threshold: Hawaii Rep. Tulsi Gabbard, self-help author Marianne Williamson and billionaire executive Tom Steyer, who had qualified in three of four required polls.

Stephanopoulos, Ramos, and Muir have all moderated Democratic presidential primary debates in the past.

What issues are likely to come up at the debate?

Primary debates highlight internal party divisions, Hans Noel, an associate professor at Georgetown University’s Department of Government, tells TIME in an email. “Most of the candidates agree on nearly everything, especially broadly speaking. So the moderators will try to find space between the candidates.”

So on what issues do they differ? Based on the seven-hour climate change town hall held by CNN on Sept. 4, climate policy is becoming one such area, says Seth Masket, a professor of political science at the University of Denver. Elizabeth Warren, for example, proposed phasing out the use of nuclear power, while Cory Booker and Andrew Yang were more optimistic about using nuclear energy. The momentum from the town hall, as well as the devastation of Hurricane Dorian in the Bahamas, might prompt moderators to focus on the topic.

Candidates also differ substantially on health care — some support Medicare for All, some strongly oppose — and the subject will likely come up as it has in the past two debates. While it has already been debated extensively, it’s too important an issue for Democratic voters to not discuss, says Kyle Kondik, managing editor of Sabato’s Crystal Ball at the University of Virginia Center for Politics.

After the deadly mass shootings in August, Masket says it’s “hard to imagine” gun violence not coming up as well. Kondik also points out that Beto O’Rourke has “staked out an aggression position on guns” after his hometown of El Paso, Texas, experienced a white supremacist mass shooting on Aug. 3, killing 22 people and injuring 24. O’Rourke might bring special attention to the issue.

The usual Democratic issues of immigration and the economy will almost definitely come up, although John Hudak, a senior fellow in Governance Studies at the Brookings Institution, says he anticipates a “bit of a different conversation” around the economy compared to previous debates because recent signs suggest the country may be headed toward a recession. Masket says the forecast could be an area for Democrats to attack President Donald Trump.

What’s the format of the debate?

Each candidate will start the debate with opening remarks, but ABC has said there will be no closing remarks. Compared to previous debates, the September debate will allow candidates more time for their answers — one minute and 15 seconds for direct responses and 45 seconds for rebuttals. The first two debates, hosted by NBC and CNN, allowed for one-minute responses and 30-second rebuttals.

Political analysts told TIME to watch for clashes between Biden and Warren. The former Vice President and Massachusetts Senator represent different wings of the party — Biden the more moderate and Warren the more progressive — and are one and two in the polls. This is the first time they’ll face off in a DNC debate.

“If [Warren’s] is going to move into the number one position she really has to take Biden down a number of pegs,” Masket says. Kondik theorizes they might clash over their different approaches to healthcare, or their different rationale for running for President.

Because Biden is is the presumed front-runner, he will likely also face attacks from Booker, Harris, Yang and other candidates to his left.

Harris had stand-out moments in the previous debates, such as when she went after Biden for his stance on busing, and is likely hoping to have a similarly viral moment again.

Hudak of Brookings says the most interesting dynamic will be between Warren and Sanders — who are neck-in-neck in the polls — partially because “there’s a real need for Bernie Sanders to get reinvigorated” as they fight for ideologically similar voters. They avoided confronting each other in previous debates, but the smaller field might force them to.

In Hudak’s opinion, lower polling candidates might seek out clashes because they view the debate as a “last gasp to stand out, and one effective way to stand out is to go on the attack and to win.”

Klobuchar is another moderate candidate who might clash with the left-leaning Sanders or Warren, and Castro and O’Rourke, who both represent Texas, might go after each other as they did in the first debate.

The debate in general might be more fiery than previous ones because the field is winnowing more rapidly, Jennifer Victor, an associate professor of political science at George Mason University’s Schar School Policy and Government, tells TIME.

How are the candidates doing in the polls?

Masket says that on average, there has been “little movement” in the polls for many of the candidates since early spring when the campaign season really heated up.

But there’s one exception: Elizabeth Warren. “One of the real stories has been the slow, steady rise of Elizabeth Warren,” he says. She has been steadily increasing since the beginning of the summer, moving into Sanders’ No., 2 spot.

What about other candidates? David Barker, a professor of government at American University, writes in an email that “Buttigieg has really fallen back, after being the darling of the spring season. He is now consistently in the same range as Booker and O’Rourke … He does poll better in Iowa, though, so he is not dead.”

Harris has also see her numbers decline since her initial spike after the first debate, which Kondik says “just goes to show the changes that we see from these debates may not be enduring, if they even occur at all.”

Victor also cautions against reading too much into polls, because at this stage in the race many voters haven’t made up their minds and are heavily influenced by name recognition.

How can I watch live?

The debate will be broadcast on ABC News, locally on KTRK-TV, and on ABC News Live. Univision will air a Spanish translation. It will also be on streaming on Hulu Live, the Roku Channel, Facebook Watch, AppleTV, Amazon Fire TV, YouTube, Apple News and Twitter.

TIME will also continue our live coverage throughout the debate. Follow along here. 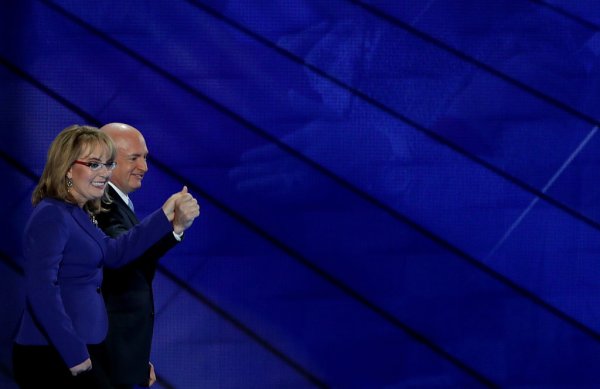 In Fundraiser Email, State GOP Chief Says She Wants to Stop Arizona Senate Candidate 'Dead in His Tracks'
Next Up: Editor's Pick