Hurricane Dorian Is Gone. But the Bahamas Still Faces a Big Risk From Infectious Disease

Hurricane Dorian’s 185 mph winds and punishingly slow pace smashed entire neighborhoods in the Bahamas, killing at least 50 people. But now, Bahamians are facing a different kind of threat. The lack of access to toilets, clean water and medications puts tens of thousands at risk for disease, public health experts warn.

Bahamians in the hardest-hit areas are already suffering from cuts and gashes caused by widespread debris and wreckage. But now aid groups are saying survivors are beginning to show signs of gastrointestinal issues from contaminated water. Those with chronic illnesses are struggling without access to treatment for chronic conditions like diabetes and high blood pressure. And if water that the storm dumped on the islands remains stagnant and untreated for long enough, it could become a breeding ground for mosquitos, giving rise to diseases like dengue, chikungunya and Zika.

Previous disasters in the Caribbean have brought infectious disease outbreaks that wreaked havoc after the initial disaster. Cholera killed thousands in Haiti after the 2010 earthquake and and at least two dozen are believed to have died in Puerto Rico from a leptospirosis outbreak following Hurricane Maria in 2017.

What are aid groups seeing on the ground?

Heart to Heart International, a Kansas-based organization experienced in disaster relief, sent a team of about a dozen people, including eight medical professionals, to Abaco last week, where they have been working alongside the government in the town of Treasure Cay.

“The clinic doesn’t have a toilet. People don’t have toilets. They’re going to have to go to the bathroom somewhere. Food will get contaminated. Water will get contaminated. Hands will just pass things, even under the best of circumstances that happens,” says CEO Kim Carroll, who is in the U.S. but has been communicating regularly with her team in the Bahamas. The Heart to Heart team arrived on the islands “completely self-sufficient” so that they could “go in ready to handle their own waste,” she adds. The staff uses a bucket with a special trash bag that’s been treated with a product to help break down human waste — a method that most regular Bahamians do not have access to.

Many patients who have come to see them are dehydrated, Carroll tells TIME. Others have chronic conditions unrelated to the storm, including hypertension and diabetes. Untreated hypertension can lead to strokes, Carroll says. Diabetics are at risk, too. “If there are any type-1 diabetics there, if they haven’t had access to insulin by now, they’ve died, most often,” she says.

Dr. Rick Randolph, a chief medical officer for Heart to Heart working in the Bahamas, tells TIME the clinic has been seeing about 30 to 40 patients a day; many of them are low-income. “Disasters are the diseases of the poor,” he says. One diabetic patient had to be airlifted after he came in with a blood infection that crept into his leg. He had a puncture wound that became infected.

“A lot of the injuries we’ve seen are puncture wounds,” — caused by somebody stepping on and being cut by debris from the storm, Dan Neal, VP of operations at the medical humanitarian non profit, tells TIME. “You can’t move around piles of stuff like that and not get cut.”

Bryan Symonette, a 34-year-old crab fishing business owner, lost his shoes when Dorian ravaged the Bahamas. As Symonette traveled around the island to find supplies and care for his family, he was forced to walk over the feces and debris-strewn grounds barefoot, TIME previously reported. His feet were gashed and his toenails were falling off, he told TIME. Since then, Symonette got three stitches on his feet, which have now been removed. He also got a tetanus vaccination on Tuesday to prevent infection and says he is walking “comfortably now.”

Neal says Heart to Heart International has sent more than 1,000 doses of tetanus vaccines to the Bahamas.

“There are people who are going to get cuts and abrasions (…) and are then going to be wading in water, which has high levels of fecal bacteria because there’s usually a disruption in sanitation. All of those cuts and abrasions and lacerations have a high risk of getting infected,” Adalja says.

Neal says his team is now seeing an increase in patients with upper respiratory and gastrointestinal issues.

This is not a surprise. The upper respiratory issues are mostly likely directly related to hygiene, Neals explains, adding that any time people cannot wash their hands and are in close proximity to each other, the opportunity for a cold to move from one person to another “just goes up exponentially.” The lack of clean water available for hand-washing, bathing and food preparation can lead to gastrointestinal issues.

Carroll’s team is one of several international groups responding to the hurricane.

Ciro Ugarte, director of health emergencies for the Pan American Health Organization, which serves as a regional office of the World Health Organization for the Americas, says the agency is working closely with the Bahamian government to respond to Hurricane Dorian and has already vetted and mobilized several international medical teams to Grand Bahama and the Abaco islands—which were hardest hit by Hurricane Dorian.

Ugarte tells TIME the agency’s priority is providing health services to Bahamians in need, especially those with chronic diseases.The second priority is ensuring water quality. “Water-borne diseases will happen, maybe not at the level of an epidemic, but these cases clearly will increase because of” the lack of availability of clean water, he adds.

Ugarte also noted that as of late Tuesday afternoon most health services and centers are fully operational, barring one hospital and four health centers.

What other diseases and infections could Bahamians face?

The biggest public health concerns in the Bahamas after Dorian will be related to the lack of sanitation, Adalja says.

The lack of access to clean water can also raise the risk for infections like leptospirosis, which can be found in the urine of rats and rodents. At least 26 people were killed in Puerto Rico from leptospirosis in the six months after Hurricane Maria hit, according to an investigation by CNN and the Center for Investigative Journalism.

Mosquito-borne diseases, like dengue, chikungunya and Zika, could also be risks after Dorian, according to Joseph Eisenberg, epidemiology professor at the University of Michigan. “If whatever infrastructure they had before to keep those mosquito populations down are no longer functioning that could result in the emergence or reemergence of these pathogens,” Eisenberg tells TIME. Mosquitos breed in small container water sources, which may be especially abundant in the Bahamas because a lot of debris won’t be cleaned up for quite a while, he explains.

But hurricanes as powerful as Dorian “can literally wipe out the entire mosquito population,” notes Tom Skinner, spokesman for the CDC. While it’s unlikely there will be large outbreaks of mosquito-borne diseases in the immediate aftermath, there could be a risk, “months down the road when waters haven’t receded.”

Could the Bahamas face a cholera outbreak?

In response to rumors about cholera surfacing in Abaco, the Health Ministry and the Pan American Health Organization put out a joint statement last Saturday saying that no cholera cases had been detected “at the moment” and that there had not been “any increased number of infectious diseases due to the hurricane.” The statement continued: “Contrary to common belief, there is no evidence that corpses pose a significant risk of disease ‘epidemics.’ This is because most agents e.g., virus and bacteria do not survive long in the human body after death.”

They did note, however, that “floods can potentially increase the transmission of water-borne and communicable diseases.”

Bahama’s Health Minister Duane Sands blamed social media for creating confusion about a cholera outbreak. “There’s no such thing happening in Abaco. But once that is spread by social media, it goes like wildfire. The time we could be spending on actually helping people, we’re having to put out multiple fires,” Sands told the Miami Herald.

After a devastating earthquake shook Haiti in 2010, the region faced a cholera epidemic that killed more than 8,100 people and infected some 665,000. The United Nations later admitted playing a role in the initial outbreak. Investigations found that Nepalese peacekeepers had been staying at the U.N. camp and poor sanitation led to sewage from the camp contaminating the local water supply.

There have been no confirmed cases of cholera in Haiti since early February, according to Ugarte, with PAHO, who says that the chances of cholera surfacing in the Bahamas are “not probable.”

Eisenberg, the University of Michigan epidemiologist, says that the “dire” public health condition in Haiti after the earthquake allowed the cholera to spread. He cautions that Hurricane Dorian could create a similarly conducive environment for the disease if the government is not vigilant.

“In order for cholera to actually happen it just has to be introduced in some way,” he says. If cholera were introduced in the Bahamas last year, “it would have just fizzled.” But if it’s introduced this year after the hurricane, it “might not fizzle out,” Eisenberg says.

How are sanitation issues being addressed?

Craig Williams, an emergency response coordinator for Water Mission, a nonprofit headquartered in South Carolina, has been working with the Bahamian government to restore access to clean water to the town of Marsh Harbor in Abaco.

“If you don’t get water sorted out quickly it very fast becomes a health emergency,” Williams says. “It’s a race against time.”

Salt water has also infiltrated much of Bahama’s existing water supply. To fix this, Williams had been using a “fine-filtration” process called “reverse osmosis” that can separate the salt from the water.

Williams says walking through Abaco, he realizes that “generations of what’s been built up is now gone.”

“You see people’s lives torn apart because there’s half a house and in that house you can see someone’s head, you can see the bookshelf up against the wall that didn’t get blown away, you can see a kid’s toys and sadly sometimes you see the people who used to live in the house, too,” Williams says.

— With reporting by Tara Law 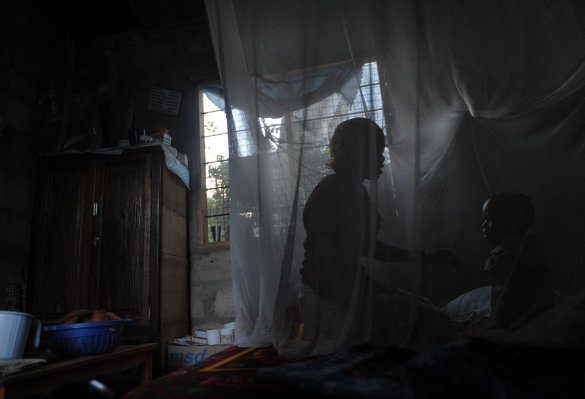 Malaria Could Be Eradicated by 2050, Report Says
Next Up: Editor's Pick