Marianne Williamson Preaches a Message of Love in the Democratic Primary

When Andrea Martinez asked about medical marijuana, the question quickly turned from the political to the personal.

At a town hall in a dimly lit church in Washington Monday evening, the 51-year-old Navy veteran suggested to Democratic presidential candidate Marianne Williamson that marijuana might make a suitable alternative to some of the medications prescribed to veterans, adding that she’d personally experienced suicidal thoughts on some of those drugs.

A spiritual adviser, best-selling author and lecturer with no prior political experience, Williamson is an unconventional candidate for the 2020 Democratic nomination. But the argument for her campaign boils down to moments like this one — times when she can personally reach out and empathize with voters in a way that eludes many of her rivals, especially President Donald Trump.

After floating in elite circles with the likes of Oprah Winfrey, who introduced her to a national audience, Williamson has a core group of supporters who believe in her message of love and kindness, enough that she reached the threshold of 65,000 individual donors to qualify for the first primary debate earlier this month.

For supporters like Martinez, Williamson’s appeal is her ability to connect with voters on a human level.

“That was, like, the connection … It was actually, like, authentic, and it was sincere. You really can’t fake that. You can’t fake it,” Martinez told TIME about her interaction with Williamson at the town hall. “Part of the reason why I’m on the bandwagon is because she’s putting forth that conversation about love.”

Still, in a field that includes more than 20 Democratic candidates (or 1,736 candidates, as Williamson joked), the celebrity self-help author has a long slog to become competitive. Although she has raised more than $1.5 million as of the end of March, Williamson still has low name recognition and hasn’t polled well. She has also struggled to be recognized as a legitimate candidate.

In the meantime, Williamson is out making a case for herself. At the town hall on Monday night, she zoomed around the room to whoever was asking her a question, to an extent that the cameras struggled to keep her in their frame and that the clearly exasperated moderator repeatedly kept having to call her back up to the front. (Williamson explained she needed to get close to people so she could watch their mouths as they spoke because she wears hearing aids.)

Her message of kindness wasn’t just aspirational, however. She also used it to target Trump over his behavior in office.

“We have a choice in this country. We have someone … [who] has harnessed fear, racism, bigotry, anti-Semitism, some of the worst faces of the human character for political purposes,” Williamson said. “There is only one way to override that, and that is to harness love, decency, compassion, forgiveness, and mercy, love for each other and love for our country, and love for our unborn great grandchildren. We need to harness that for political purposes.”

The audience was diverse, but a lot of her long-time fans were middle-aged women who at one point or another read her books. Even Williamson’s campaign manager, Maurice Daniel, ceded he was not really aware of Williamson “like a lot of men” before he started working on her campaign.

“I believe that it’s really important — critical — for our country to unite and come together and have more grace and tolerance, and actually, just, you know, love and a lot less judgement of one another,” said Heather Smith, 61, of Frederick, Maryland. She said she was supporting Williamson as a candidate and had followed her work for almost 30 years, adding that she is not nearly as familiar with other candidates in the race.

Another woman, Elaine Duncan, 48, drove from Annandale, Virginia, despite being exhausted from getting in at 1 a.m. from a Montana trip, to catch the town hall. She has also followed Williamson for years.

“I think that she’s going to change the conversation a lot,” Duncan said. “I just think that the way she communicates is on an entirely different level, and I think that she comes from such a place of wisdom that you almost can’t disagree with her.”

Duncan said she voted for Trump but is planning on switching her party affiliation so she can support Williamson. (“I don’t think Trump is stupid, but I think he’s an ass,” she said, adding that she doesn’t think Trump sets a good “moral example.”) Asked if she would do that for another candidate, she said she didn’t know. She described Williamson as “unflappable.”

Listening to Williamson’s remarks gave the sense of being at a concert where everyone knows the hits.

“Preach!” yelled out a man in the audience when Williamson said she pushed back on the idea that only someone who has spent decades serving in elected office or made a career out of public service could be the Democratic nominee. They’re the same people “entrenched within the same mindset that drove us into this ditch,” she said.

What elected office boils down to, she argued, is people making decisions, and it doesn’t take prior experience to do that. She blasted members of Congress for spending a good portion of their time fundraising anyway.

“I know that my candidacy is outside the box. I submit to you, the box is deadly,” Williamson said to an appreciative audience. “I don’t know, I take back the word deadly — toxic. Let me stay with toxic.”

Williamson’s platform includes paying reparations (a proposal that got loud cheers from the audience) and creating a Department of Childhood and Youth to focus on “chronic trauma” experienced by American children because of systematic failures. But during the question and answer portion of the evening, Williamson touched on everything from marijuana, which she wants to legalize, to abortion, which she called an “issue of private morality” the government should have nothing to do with.

Asked about impeachment, Williamson said that the answer to whether Trump has committed impeachable offenses is an “absolute yes,” but that there are “political dimensions” as to whether Democrats should pursue impeachment. “He’s goading us to impeach him,” she said, going on to praise some chairs of House Committees by name for the way they have handled Trump investigations.

A lot of Williamson’s success may hinge on whether she’s able to set herself apart from the rest of the candidates in style.

“There are two categories of candidates in the Democratic party,” Williamson said when asked how she was going to differentiate herself from other candidates who are running. “There are those who feel that an incremental approach and maybe treating the symptoms will be enough, and then there are a few of us who believe [in] a serious, fundamental path of disruption, economically and politically, and I’m clearly one of those.”

Whether Williamson’s message ends up resonating with a larger audience remains to be seen. By the time the town hall ended, a large chunk of the audience had already trickled out early. 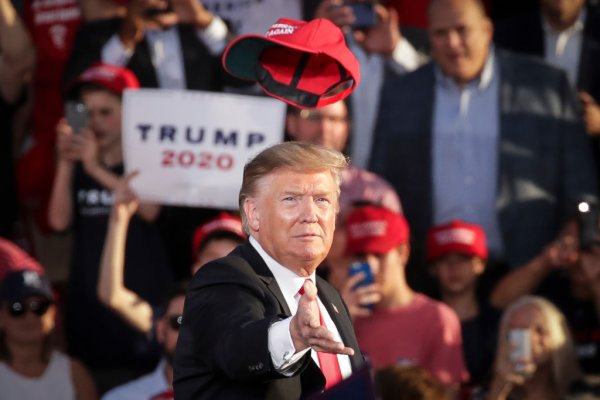 Trump Trains His Fire on Biden in Pennsylvania
Next Up: Editor's Pick