Why Would Anyone Want to Be HUD Secretary?

San Antonio Mayor Julian Castro (R) delivers remarks after U.S. President Barack Obama (C) announced his nomination of Castro to lead the Department of Housing and Urban Development and Shaun Donovan (L) as the nominee to head the Office of Management and Budget in the State Dining Room at the White House on May 23, 2014 in Washington.
Chip Somodevilla—Getty Images
By Jay Newton-Small

President Barack Obama is poised Friday to nominate San Antonio Mayor Julian Castro to be the next secretary of Housing and Urban Development.

Castro is a popular and successful mayor who is oft rumored to be on the VP shortlist of the only potential Democratic 2016 candidate who matters: Hillary Clinton. So, getting him some broader experience makes sense. To that end he was previously offered Secretary of Transportation, a job he turned down. Passing on Transportation Secretary for a more powerful cabinet position like, say, Treasury or Attorney General might make sense. But why on earth would he accept HUD, perhaps the most inglorious minefield of all cabinet jobs?

“He focused on neighborhoods and community redevelopment as mayor,” says Hilary Rosen, a managing director of SKDKnickerbocker, a Washington consulting firm that has worked with Castro in the past. “This lets him do that on a bigger scale. Sometimes taking these cabinet jobs just comes down to having a passion for the issues.”

Hopefully, Castro’s love of the subject matter and political sense will help him avoid some of the post’s pitfalls that have brought down former HUD secretaries. The first lesson, which Castro hopefully learned dining with Clinton-era HUD secretary Henry Cisneros last week before he accepted the nomination: Do not lie on your government disclosure forms. Cisneros’ downfall came after he omitted on those forms monthly payments to a former mistress. He eventually pled guilty to lying to the FBI and paid a $10,000 fine, but his aspirations to higher office were wrecked by the scandal.

HUD is also a tempting place for political cronyism. It sits at the juncture of the public and private sectors, awarding all kinds of lucrative contracts. Two other HUD secretaries, Samuel Pierce under Ronald Reagan and Alfonso Jackson under George W. Bush, fell out of grace for either blatant corruption or turning a blind eye as others in the department doled out contracts to friends and relatives.

That said, the job can be a good springboard for West Wing ambitions. Just look at George Romney, who served under Richard Nixon, and Jack Kemp, who was George H. W. Bush’s first HUD secretary. Romney, father of 2012 GOP nominee Mitt Romney, ran an unsuccessful presidential bid against Barry Goldwater in 1968. Kemp was Bob Dole’s running mate in 1996.

The biggest lesson to be learned about being HUD secretary, though, is this: don’t blatantly use it as a stepping-stone to higher office. New York Governor Andrew Cuomo, who is often rumored to be weighing a presidential bid in 2016 if Clinton doesn’t run, was criticized for using his tenure as HUD secretary to run for governor. Cuomo used taxpayer money to take 24 trips to New York as secretary, 21 more trips than he made to any other state. And he spent nearly $700,000 printing a lovely glossy book about his achievements as secretary, full of pictures of him with VIPs like Sarah Jessica Parker and former Israeli President Shimon Peres.

“It was about me, me, me, me, me,” Irene Facha, who ran HUD’s Mid-Atlantic single-family home program out of Philadelphia, told the New York Post in April 2002. “If [Cuomo] didn’t get a headline out of it, he didn’t want to hear about it.”

So lessons learned: don’t lie on your application, don’t award your friends contracts and don’t showboat. If anything, the outgoing HUD secretary Shaun Donovan was a model for a successful tenure. And he did such a good job that he’s being made head of Obama’s Office of Management and Budget, a lower-level cabinet position with diminishing relevance in lame duck years. But, hey, good luck, Castro. 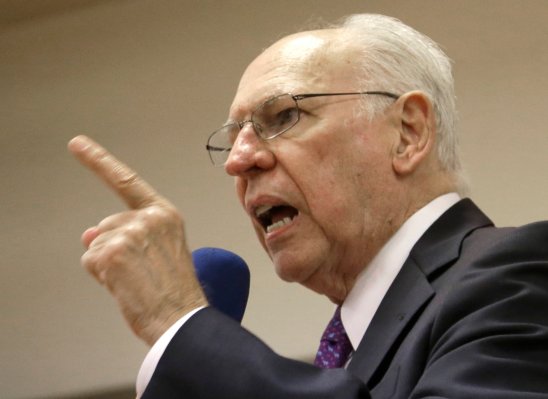 Ted Cruz's Father: Bible Says Who to Vote For
Next Up: Editor's Pick