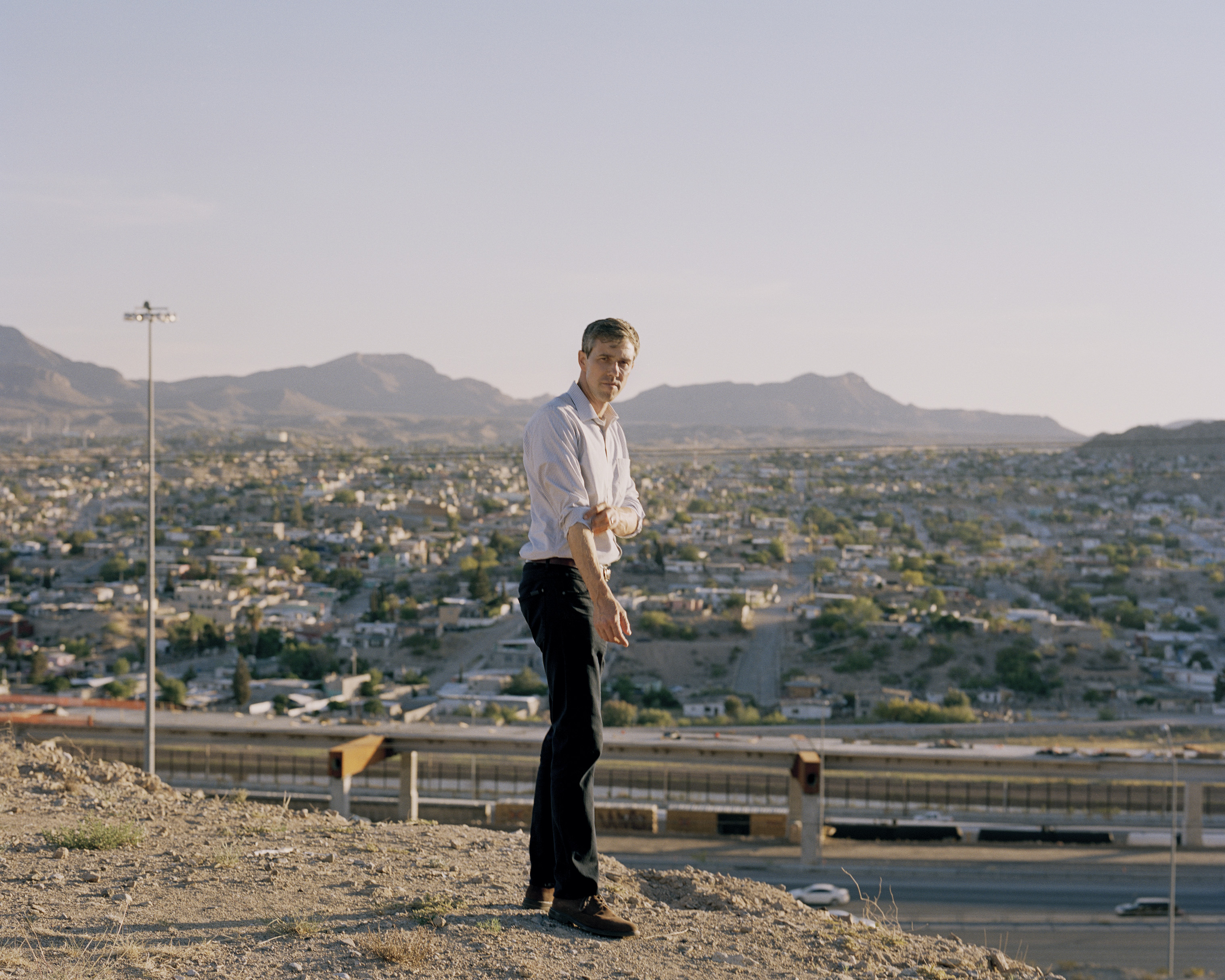 Beto O'Rourke stands with the border between El Paso and Juarez behind him.
Benjamin Rasmussen for TIME

Beto O’Rourke Is on a Long, Hard Road

By Nash Jenkins | Photographs by Benjamin Rasmussen for TIME

On a dusty road in southwestern Texas, Beto O’Rourke leans out the window of the Ford Expedition he’s driving and mutters, “You gonna let me pass you, state police?” He speeds ahead of the cruiser while chewing an empanada. In the past seven days, the 45-year-old Democratic Congressman has clocked nearly a thousand miles across the state. Tonight, after a town hall in Uvalde, an hour away, he gets to go home.

Small towns have been O’Rourke’s favored terrain since he launched a bid to unseat Republican Ted Cruz as the Lone Star State’s junior Senator nearly 14 months ago. History says O’Rourke is an underdog in November: Texas chose President Trump by nearly 10 percentage points in 2016 and hasn’t sent a Democrat to statewide office since Ann Richards was elected governor in 1990. But O’Rourke, a former punk-rock bassist who has spent three terms in the U.S. House, talks more about the future.

“The country had come to this cross-roads,” he says. “We were going to be either a country of walls and Muslim bans and the press as the enemy of the people—all this mean sh-t, all this pettiness and paranoia trying to make us afraid of one another—or we were going to be something better.”

Cruz is a dogmatic conservative who once battled the party establishment, then embraced the President after finishing second to him in the 2016 GOP primary. O’Rourke is an Irish American with a Hispanic nickname (Beto, a diminutive for his first name, Robert, is a child-hood sobriquet that stuck) who spends several hours a week practicing his Spanish. He calls for a single-payer health care system and legalized marijuana.

He has certainly galvanized the grassroots left. In the first quarter of 2018, O’Rourke raked in $6.7 million, more than twice the haul of the Cruz campaign and his allied super PACs, which is a fund-raising force in its own right. (Cruz pulled in $143 million to his campaign and allied super PACs in 2016, and the two candidates have roughly the same amount of cash on hand.) A mid-April Quinnipiac University poll found the race to be a near dead heat, though independent analysts call the Democrat a long shot.

A wall in O'Rourke’s campaign office.
Benjamin Rasmussen for TIME

“O’Rourke without a doubt is running a stronger top-of-the-ticket campaign in Texas than we’ve seen since the turn of the century, at least,” says Jim Henson, director of the Texas Politics Project at the University of Texas. “Yet it seems unlikely that he can overcome the deep structural disadvantage any Democrat has in the state. For all the increase in Democratic intensity that is evident in Texas as it is elsewhere, we still saw about a half–million more Republicans than Democrats vote in the March primary.”

More is at stake than a seat in the Senate. For years, Democrats have hoped that a growing Hispanic population would ultimately turn Texas blue. An O’Rourke victory would not only be one of the biggest upsets of the Trump era. It would signify that demographic change had in fact arrived, pointing the way for other Democrats running in red states. “It’s not us,” O’Rourke says. “It’s the moment.”

It may be. But after Barack Obama was elected for the second time, Democrats argued that a multicultural population was a permanent advantage: demography as destiny. Then Trump won.

O'Rourke carries his son Henry, 7, on his shoulders.
Benjamin Rasmussen for TIME

The San Antonio airport was quiet when O’Rourke arrived for his 10 p.m. flight home. It had been a long day. Dozens of people had turned out in Uvalde, the seat of a county that went for Trump by 11 points. In Carrizo Springs, he was serenaded by an accordion player who had written him a corrido, a form of Mexican romantic ballad, about defeating Cruz. As he has on many legs of his campaign journey, O’Rourke streamed the drive to the airport on Facebook Live.

The Congressman is lanky, handsome and charismatic. Elderly voters some-times tell him that he reminds them of John F. Kennedy. He lives with his wife Amy and their three children in a mission-style house on a hill overlooking downtown El Paso, a city his family has called home for five generations but one O’Rourke was eager to escape. “I wanted to get out of El Paso faster than I knew how,” he says. “I was certain I was never going to come back.”

He went to boarding school in Virginia, then to Columbia University. Home-sick and sensing opportunity in a city “kind of finding itself again,” he returned to El Paso in his mid-20s. The city, a former low-wage industrial center, had been devastated by the loss of jobs under NAFTA. O’Rourke launched an online alternative newspaper, which in turn fueled his interest in local politics. In 2005, he decided to run for city council.

He served for six years, spearheading plans to attract investment downtown and improve the city’s creaky public–transit system. Still, politicos were skeptical in 2012 when he challenged Silvestre Reyes, the eight-term Democratic incumbent representing El Paso in Congress. “No one thought he could win,” says Michael Pleters, a local immigration judge who is friends with O’Rourke. “But he’ll out-work anyone.”

O’Rourke’s six years in Washington have not been splashy. He votes with his party slightly less often than the average Democrat. Nearly half the 27 bills he has sponsored relate to veterans; there are nearly 50,000 of them in El Paso, home to one of the country’s largest military complexes, Fort Bliss. He successfully fought for provisions in the most recent government spending package that expanded mental-health care to veterans with a less-than-honorable discharge, which he describes as his proudest accomplishment.

O’Rourke first mulled a Senate run after Trump’s election, traveling across Texas to sound out voters on the idea. “We never took a poll,” he says. “Nobody from the state party ever asked me to consider it.” The skepticism about his chances is rooted in recent history. In 2014, Democratic state senator Wendy Davis, propelled to national celebrity by her filibuster of an abortion-limiting bill, launched a well-funded, widely hyped campaign for governor. She lost by 20 points.

O'Rourke with performers at the Mariachi Loco Music Festival in El Paso.
Benjamin Rasmussen for TIME

Whether O’Rourke can break through will, indeed, depend partly on the chang-ing face of the Lone Star State. From 2010 to 2016, its Hispanic population grew by nearly 1.5 million. Two in five Texans today are Hispanic; by 2020, the state expects Hispanics to outnumber non–Hispanic whites. “I don’t think it’s an empty myth. It’s a demographic reality that will come to pass,” Ace Smith, a Democratic consultant who ran Hillary Clinton’s primary campaign in Texas in 2008, says of the party’s prospects of winning in the state. “The only question is when.”

But demographics alone won’t be enough. After all, Cruz, whose father is Cuban American, won nearly 40% of the Hispanic vote in his 2012 Senate victory. “Yes, there is a large Hispanic vote in Texas,” Chris Wilson, the Cruz campaign’s pollster, tells TIME. “But those voters are much more Republican than are Hispanics in, say, California.” Cruz attacks O’Rourke as a liberal Democrat, citing his support for the Iran nuclear deal and sanctuary cities. “Congressman O’Rourke’s values may bode well in California,” says Catherine Frazier, a Cruz spokeswoman, “but they are the opposite of what Texans want in their leaders.”

Victoria DeFrancesco Soto, a lecturer at the University of Texas at Austin, says the election odds strongly favor Cruz. “For the challenger,” she says, “there’s a path, but a narrow one.”

O’Rourke is betting that it runs through the hinterlands. He has spent more time than any other Democrat in recent memory visiting towns across Texas, including all 254 counties. He says he sees two currents of dis-affection that work in his favor: Demo-crats are eager for new leadership. And some Republicans don’t like the GOP’s direction under Trump. “I mostly vote Republican in national elections, but I’m so disgusted with what’s taking place,” a 72-year-old cattle rancher and self–identified conservative named Bill Martin said after O’Rourke’s town hall in Carrizo Springs. “The body politic is kind of like the human body. The liberal faction represents the heart, the conservative faction represents the mind, and the body needs both to stay alive.” Martin said he was leaning toward voting for the Democrat.

O'Rourke speaks to the crowd at the Mariachi Loco Music Festival in El Paso.
Benjamin Rasmussen for TIME

He’s not the only one left cold by Cruz. “Beto’s greatest strength is Ted’s greatest weakness: likability,” one House Republican says, speaking privately to avoid publicly criticizing a colleague. O’Rourke has drawn in young voters in particular. “I feel like he’s a guy who actually listens to us,” Alondra Iglesias, a 19-year-old college student, says at a campaign town hall at a beer garden in Laredo.

On a Friday evening in early May, O’Rourke makes an appearance at a mariachi festival in El Paso. Amy O’Rourke had given her husband a 7 p.m. curfew, but before heading home he climbs into his pickup and heads into the hills, pulling into the empty parking lot of Sun Bowl Stadium. Below are the train tracks that run along the border, and beyond the endless sprawl of Juárez, orange and purple in the creeping dusk. It’s a city of about 1.4 million people that’s separated from El Paso by a tall, rust–colored fence. A message has been painted in Spanish onto the face of a mountain, legible from miles away: LA BIBLIA ES LA VERDAD; LEELA. (The Bible is the truth; read it.)

It’s a version of the border—and of comity—that stands in almost perfect contrast with the one that Trump rode into office two years ago. And O’Rourke is physically at home with it. He is well aware of how Wendy Davis’ campaign fizzled and knows it’s a challenge to sustain early momentum until Election Day. “We’ve been smart enough to be honest with the people,” he says. “I just want to be as raw and direct and real as I can—and it seems to be working.” He’ll make history if it does.