Whether you know it as vacation season, hurricane season or wildfire season, August is a time when our natural surroundings can take on outsize importance in our daily lives. The same is true of this month’s best new TV shows, each of which conjures a vivid sense of place, from the brick edifices and manicured lawns of East Coast academia to the flat expanses of an Oklahoma reservation to desolate, gray beaches in France’s Nantes region. There are also two very different takes on a city that contains multitudes: New York. For more suggestions, here’s some of my favorite TV from July, June and the first half of 2021.

Netflix’s perceptive black comedy The Chair opens at what should be the proudest moment of Professor Ji-Yoon Kim’s career. She has just been named the first-ever female Chair of the English Department at venerable (and fictional) Pembroke University, where she’s also one of very few nonwhite faculty members. At a dire moment for the humanities, when a STEM major looks to many students like the only viable path to repaying their college loans, her colleagues have entrusted her to revitalize the increasingly underfunded, under-enrolled department.

Unfortunately for Ji-Yoon, played by the great Sandra Oh with her signature mix of intelligence, determination and nervous energy, that vote of confidence turns out to be a curse. [Read TIME’s full review.]

French filmmaker Jean-Xavier de Lestrade set the standard for the prestige true-crime documentary with The Staircase, a vérité-style series that debuted in 2004 and ultimately followed the legal ordeal of Michael Peterson, an American author charged with killing his wife, over the course of almost two decades. In Laëtitia, the director turns his camera on a crime that shook his home country in 2011: the murder of 18-year-old Laëtitia Parrais, who lived with her twin sister Jessica in foster care. As the details of this infuriating real-life tragedy reveal themselves, De Lestrade’s decision to dramatize rather than document the story starts to look not just inspired, but also sensitive to all that these young women endured.

The six-episode drama opens with a chilling discovery. Up early one morning, Jessica (Marie Colomb, in a superb, emotional performance) finds her sister’s scooter and shoe dumped in front of their foster parents’ home. Laëtitia (Raw star Sophie Breyer) is nowhere to be found. It would be the perfect setup for a whodunit, but De Lestrade and co-writer Antoine Lacomblez aren’t interested in squeezing suspense out of real people’s pain; the French public already knows how Parrais’ story ends anyway. Instead, by interweaving flashbacks to Laëtitia’s trajectory on the day she disappeared and the girls’ harrowing childhood—from a father jailed for raping their mother to their placement with the strict Patron family as preteens—into its account of the police investigation, the series captures how two vulnerable young women were failed over and over again by institutions that were supposedly designed to protect them. Particularly given the shared foster-care component, Laëtitia makes for compelling companion viewing to Netflix’s 2019 true-crime drama Unbelievable. But this is, in many senses, an even darker tale, one that suggests we’ll keep hearing stories like Parrais’ for as long as patriarchy persists.

Spike Lee‘s latest docuseries, an eight-hour dive into New York in the 21st century, has been in the news for the past few weeks following an announcement that the director was re-editing a final episode that reportedly gave credence to debunked 9/11 conspiracy theories. Yikes. Lee has since deleted the controversial section, and a significantly shorter version of the episode will air on Sept. 11. Especially for those who can’t stomach the patriotic pomp of most remembrances, it’s a moving tribute to those whose stories went untold, from families who lost loved ones to sanitation and construction who did the hard, humble work of excavating remains from Ground Zero while cops and firefighters were celebrated as superheroes.

If you can forgive Lee’s abiding contrarian streak, there’s a lot to love about the rest of his rambling ode to his city as well. New Yorkers of all stripes—politicians, celebs, activists, essential workers, first responders—sit for playful yet substantive interviews, creating a collage of Gotham-centric humanity. Lee’s combination of righteous inquisitiveness, gallows humor, authentic love for the city and eye for novel ways into events that have been dissected to death make him the perfect interlocutor for this particular story. While the second episode is loose to the point of unraveling, the filmmaker is at his best in a premiere focused on COVID-19 and BLM, and the third episode, which chronicles the rise and fall of the Twin Towers.

Only Murders in the Building (Hulu)

A mild, witty, middlebrow comedy that doesn’t try too hard to be virtuous or controversial or timely, Only Murders in the Building arrives in time to soothe our Delta-era, back-to-school-and-work anxieties. Created by Steve Martin and John Hoffman (Grace and Frankie), it casts Martin, his frequent collaborator Martin Short and a sparkling Selena Gomez as strangers living in a Dakota-like Upper West Side luxury building who become amateur sleuths when one of their neighbors is found dead in his apartment. It won’t expand your mind or change your life, but it might temporarily lower your blood pressure a few points. [Read the full review.]

Depictions of Indigenous communities in American pop culture have, historically, often added insult to grievous injury. So it’s encouraging to see two TV series—Peacock’s Rutherford Falls and now Reservation Dogs, from FX on Hulu—co-created by, starring and centered on Indigenous Americans premiere within months of each other. Even better: Dogs is one of the year’s best new comedies. Helmed by filmmakers Sterlin Harjo and Taika Waititi, it follows a coed crew of teens on an Oklahoma reservation. Still mourning a friend who died a year earlier, the ad-hoc gang is saving to finance a move to California through various extralegal schemes whose immediate effect is to bring them into unwitting conflict with other local posses. Fans of Atlanta, On My Block or any series that mix absurd humor with gritty realism are sure to adore this smart, funny and groundbreaking show. 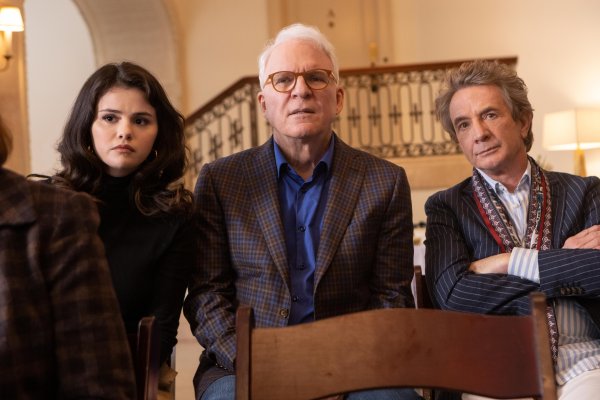 Steve Martin’s Only Murders in the Building Is a Droll, Cozy Mystery for Modern Manhattan
Next Up: Editor's Pick