Taika Waititi was wearing a G-string when he decided to start making his own movies. It was 2002, more than a decade before Marvel plucked the director from his native New Zealand and tasked him with revamping the formulaic Thor series into a psychedelic romp for the God of Thunder’s third film, Thor: Ragnarok. Back then, Waititi was just an actor playing a stripper in an Australian television series called The Strip. And he was not happy about it. “I was being paid money. So on the one hand, I was eating and paying rent,” says Waititi, 42. “On the other hand, I was creatively depressed, because I was getting my body waxed and having to eat tuna all day. I remember thinking, ‘I’m helping to make someone else’s bad idea. I’m sure I have better ideas than this.’”

He did. During breaks in the greenroom on set, Waititi wrote his first film, a short about three kids hanging out in a parking lot titled Two Cars, One Night. The movie’s mix of childish innocence and deadpan humor has since become Waititi’s trademark. It was also nominated for an Academy Award in 2005. When the camera cut to Waititi’s seat during the ceremony, he pretended to be asleep. “Because that film did really well, I felt like the pressure was on to direct as a job,” he says.

But he could also create parts for himself—ones that didn’t involve giving lap dances. He played a pot-smoking dad with killer Michael Jackson dance moves in his 2010 movie Boy and a priest who gives a funeral sermon about Doritos in his ’16 movie Hunt for the Wilderpeople. Like his first movie, those films focused on misfit kids in search of family. They also upended stereotypes about the Maori, the indigenous New Zealanders. (Waititi is half Maori.) Both movies set records for the highest-grossing local films in New Zealand. Waititi won awards at the Sundance and Toronto film festivals.

Yet as his fame grew in his native country, Waititi assiduously avoided Hollywood. He bailed on the Disney princess flick Moana after writing a first draft in favor of making the vampire mockumentary What We Do in the Shadows with fellow Kiwi Jemaine Clement from the comedy Flight of the Conchords. Waititi says his worst nightmare is becoming “a writer for hire in Burbank.” And yet here he is at the Montage Hotel in Beverly Hills promoting a Marvel superhero movie that he directed. It happens to be a delightfully weird one: The film about Thor’s tribulations as an enslaved gladiator features a sensitive rock monster played by Waititi himself, Jeff Goldblum in turquoise eyeliner and a gag about the Hulk’s private parts. But it is a superhero movie nonetheless. Says the director of how he got here: “I’m just as surprised as everyone else.”

His father was a farmer and artist, and Waititi dabbled in painting, animation, photography, poetry and stand-up comedy in his 20s and 30s. His visual art is irreverent and sometimes political, like a series of U.S. dollar bills in which the Presidents have been replaced by figures like a Ku Klux Klan member or Ronald McDonald. It’s clear why Waititi wound up an actor: he has a surplus of energy that lends itself to comedy. During my interview with him, he not only fidgets but also manages to contort himself into 12 distinct positions on the couch. This goofiness almost covers up the fact that he’s also got movie-star looks and a slick sense of style: fellow director Ava DuVernay recently called him the “best-dressed helmer in the business” after he wore a pineapple romper to an appearance at San Diego Comic-Con.

It’s especially gauche to brag in New Zealand, which is why Waititi brushes compliments off with self-deprecation. But we’re in America now. “Here, it’s almost like you have to do that to be successful,” he says. Coming to Hollywood has consequently been a bit of a culture shock. “I learned very early from my family that there’s no money in art, which is nice. It takes the pressure off,” he says. “But people get passion for art and passion for fame confused here. So many actors are like, ��I love the craft,’ and I’m like,‘No, you love being recognized on the street.’”

That is not true, Waititi says, of Thor star Chris Hemsworth. (The two became friends a few years ago after Hemsworth congratulated the director on Boy’s success.) But when Marvel asked Waititi to pitch a Thor movie, the duo decided to keep their budding bromance under wraps. Neither wanted Waititi to get the job because of Hemsworth. Once he officially came onto the project in 2015, Waititi and Hemsworth quickly began plotting how they could revise Marvel’s most perfect—and perhaps most boring—superhero.

The second Thor movie got middling reviews, and Hemsworth had expressed doubts about the future of the franchise. Waititi is usually attracted to stories about outsiders, and Thor seemed to be the ultimate insider: when he lands on earth, girls swarm around him in hopes of grabbing selfies. “Traditionally, Thor is basically a good-looking rich kid from outer space,” says Waititi. “You don’t want to root for that guy. So how do you knock him down?”

You take away his powers. In Ragnarok, Thor is unceremoniously stripped of his hammer, his ability to control the skies, his freedom and, most shockingly to fans, his long locks. The Goddess of Death Hela (Cate Blanchett) arrives to set the apocalypse in motion, and Thor finds himself on a strange planet where he must compete in gladiatorial competitions with powerful creatures, including the Hulk.

Waititi coaxed stars like Cate Blanchett, Jeff Goldblum and Tessa Thompson (above) to flex their comedic muscles on the set of Thor in Australia.
Jasin Boland—Marvel Studios

Without his accoutrements, Thor is forcedto rely on his personality, and Waititi was determined to give him one. The director made use of Hemsworth’s knack for self-deprecating humor, first exhibited in last year’s Ghostbusters. “Chris is great at making fun of himself, which I was shocked nobody had exploited earlier,” says Waititi. They ditch Thor’s self-aggrandizing in favor of sheepish lines like, “I lost my hammer, like, yesterday, so that’s still pretty fresh.”

Waititi’s style involves a good deal of improvisation, which seems to have worked for Hemsworth and the Hulk actor Mark Ruffalo. In one improvised scene, the two Avengers share a heart-to-heart about their hot tempers while wearing only towels and lounging together on a bed. “I was filming this thinking, Is there any reality in which this ends up in the movie? Because this belongs in a Sundance film,” says Waititi. But the scene made it in.

Previous marriages between big studios and indie directors haven’t been so harmonious. LucasFilm (which, like Marvel, is owned by Disney) has parted ways with three directors over differences for its Star Wars films. When other directors like Colin Trevorrow (Jurassic World) or Gareth Edwards (Rogue One) make the leap from independent to studio films, their quirky voices are often subsumed by the formulas that drive big-budget films.

Not so for Waititi. Ragnarok’s humor is strange, the scenes character-driven, the plot isolated from the rest of the Marvel universe. It’ll either point superhero films in a refreshing direction or send fans into spasms over lack of reverence for the source material. Either way, 17 movies in, Marvel was willing to take the risk. “I had my doubts,” says Waititi of collaborating with the studio. “But I decided to focus on my strengths and let Marvel help me with the Marvel stuff. Like, I can never remember how many Infinity Stones there are.” (The powerful gems are scattered throughout Marvel’s movies. There are six of them.)

After Ragnarok premieres, Waititi plans to return to New Zealand. He’ll work on one of the scripts he has stowed away, like a mockumentary on werewolves or a stop-motion animated movie about Michael Jackson’s pet chimp, Bubbles. In other words, more of the wonderfully weird same. 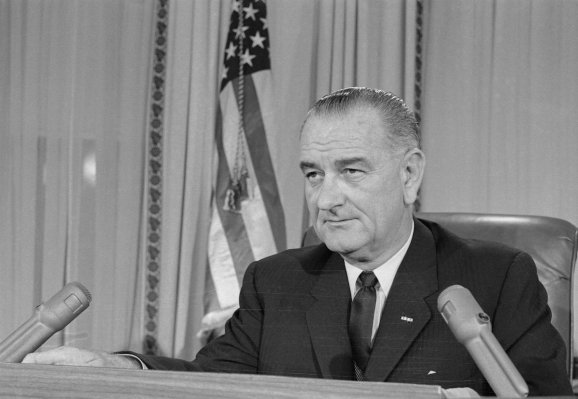 The True History Behind the 'LBJ' Movie
Next Up: Editor's Pick