Steve Martin’s Only Murders in the Building Is a Droll, Cozy Mystery for Modern Manhattan

We ask a lot from television these days. As evidenced by the weird intensity of the current debate around Ted Lasso, a performatively gentle, emotionally aspirational Apple TV+ sitcom that once seemed controversy-proof, the discourse leaves little space for shows to be anything besides brilliant or terrible. Which is a shame, because sometimes a mild, witty, middlebrow comedy that isn’t trying too hard to be virtuous or subversive or timely really hits the spot.

Only Murders in the Building is precisely that kind of show, and it arrives—with the first three episodes streaming Aug. 31 on Hulu—in time to soothe our Delta-era, back-to-school-and-work anxieties. Created by Steve Martin and John Hoffman (Grace and Frankie), it casts Martin, his frequent collaborator Martin Short and a sparkling Selena Gomez as strangers living in a Dakota-like Upper West Side luxury building who become amateur sleuths when one of their neighbors is found dead in his apartment. It won’t expand your mind or change your life, but it might temporarily lower your blood pressure a few points.

The story begins, like so many recent crime stories, with a podcast. Former TV actor Charles (downbeat straight-man Martin), theater director Oliver (a typically goofy but not off-the-wall Short) and mysterious 20-something Mabel (Gomez, paying subtle homage to the femme fatale archetype) have one thing in common besides their swanky address: they’re all addicted to a Serial-style true-crime podcast called All Is Not OK in Oklahoma. One evening, as each character is settling in for a new episode, the fire alarm sounds, forcing them off their couches. The unlikely trio winds up sharing a booth in a local bar, where they compare notes on their shared obsession. Upon returning home, they learn that police have found the body of one Tim Kono (Julian Cihi), a young man who turns out to have made plenty of enemies in the building.

Steve Martin, Amy Ryan and Selena Gomez in 'Only Murders in the Building'
Craig Blankenhorn/Hulu

Police quickly rule his death a suicide, but our heroes immediately sense something amiss, which means they have no choice but to team up on their own true-crime podcast, also titled Only Murders in the Building (they are only investigating murders in this particular building, you see). This is, of course, the perfect excuse to bring three isolated people together, thus curing their loneliness. In the process, the secrets each character is keeping—secrets that are keeping them from finding friendship, love and fulfilling work—come out. And their search for Tim’s killer yields some fun roles for guest stars and supporting players including Sting (as himself), Amy Ryan, Nathan Lane and Da’Vine Joy Randolph.

There are whiffs of thematic point-making here; we could never use too many reminders, I guess, that the true-crime tales so many people devour wring suspense out of real people’s pain. Armchair detectives might get impatient with Only Murders’ many whimsical digressions from a central mystery that is mostly a pretense for character-driven comedy. But thankfully, the latter piece of the show is solid. The inevitable intergenerational humor is reciprocal, lighthearted and often pretty funny. “Calls bother them for some reason,” Oliver advises Charles, referring to the youngs in general, when they’re trying to contact Mabel. “I guess old white guys are only afraid of colon cancer and social change,” Mabel quips at another point. “Sad.”

The main item on Only Murders’ agenda is entertainment, and it provides, in the same mannered, urbane, slightly old-fashioned comic style that characterizes Martin’s fiction and contributions to the New Yorker. (So synergistic is this series with that magazine that the animated title sequence could actually be a New Yorker cover, down to the title font.) This is “Shouts & Murmurs” meets “Talk of the Town” meets cozy murder mystery, a ’90s Woody Allen crime caper without the Woody Allen ick factor. Its dialogue is fizzy like a mimosa rather than explosive like a Molotov cocktail; violence mostly takes place offscreen. And if it’s hard to imagine the show setting social media ablaze, well, maybe that’s just another reason to watch. 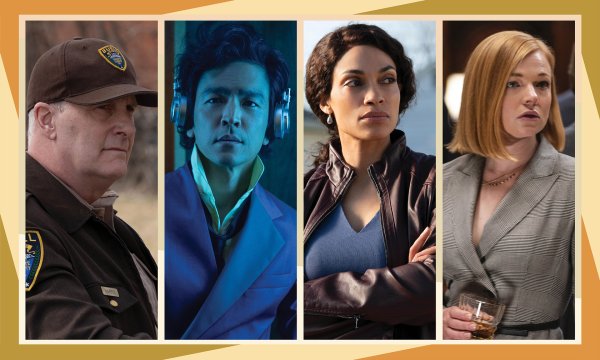 The 33 Most Anticipated TV Shows of Fall 2021
Next Up: Editor's Pick