July marks the high point of the summer season, and television has noticed. Along with the sparse, anticlimactic but occasionally transcendent Tokyo Olympics, the past month’s best programming has gone hard on sun and fun. Below, you’ll find a devilish dramedy that revolves around trouble in paradise, romances of the both the period-drama and the reality-competition variety, a journey into the sounds of pop music—as well as a surprisingly honest, artful documentary portrait of an Olympian among Olympians.

In need of additional suggestions? Here’s a list of my favorite shows from the first half of 2021, plus a few more highlights from June.

Here’s something I never thought I’d type: thank heavens for FBoy Island. Like Love Island, Temptation Island and, sure, 30 Rock‘s satirical MILF Island before it, FBoy transports a couple dozen hot people to the kind of luxury-beach-resort backdrop where even non-exhibitionists might plausibly wear swimsuits all day. At the center of the game are three gorgeous women, Sarah, Nakia and CJ, looking to get into serious relationships with men who really care about them. Of their 24 chiseled suitors, half are self-identified Nice Guys—guileless dudes who really have come to find love—and half are FBoys (a cleaned-up version of the obvious profane slang term) competing solely for a cash prize.

In the wrong hands, a premise like this could yield the same sexist schlock that is standard for this kind of dating show: look at these poor, stupid girls falling for all the old womanizer gambits. This is where FBoy’s smart execution makes all the difference. Crucially, the women not only come off as relatively intelligent and perceptive, but also generally have each other’s backs, collaboratively sleuthing to sniff out FBoys and saving each other from unpleasant dates. It’s a refreshing change from the catfights that The Bachelor and its clones are always serving up. With a few fun exceptions, the show also conceals from both viewers and the other men whether each contestant is a Nice Guy or an FBoy. This shatters the illusion that it’s easy to tell who’s who, while also maintaining suspense and allowing us to play along from home. [Read TIME’s full review of FBoy Island and Sexy Beasts.]

I wasn’t expecting Netflix’s three-part documentary Naomi Osaka to remind me so much of Radiohead’s Meeting People Is Easy. Released at the height of the band’s mainstream popularity, in 1998, Grant Gee’s tour film captures some stunning musical performances—but what makes more of an impression is all the footage of exhausted musicians trudging their way through interviews, photo shoots and other media obligations that feel unnervingly similar no matter where on Earth they happen to be. The primary mood is disorientation. This is another way of saying that Naomi Osaka isn’t like any other sports doc I’ve ever seen.

Director Garrett Bradley, whose excellent feature Time was nominated for an Academy Award this year, spent two years following the Haitian-Japanese tennis superstar as she ascended to become the top-ranked player in the world. Although it contains no small amount of nail-biting tournament footage, and ends on a high note with Osaka’s Australian Open victory earlier this year, this is no simplistic inspirational narrative. In frank, patient interviews and candid vérité scenes, Bradley evokes a sense of what it must be like to actually be Osaka. And it certainly isn’t easy. The pressure heaped on her by the outside world is exceeded only by the pressure this thoughtful, determined, relentlessly self-critical athlete places on herself. Watching her smile politely through silly fashion shoots, endure rude questions at press conferences and, at one point, wonder aloud whether she’s failed to achieve all she should have by age 22 can be heartbreaking. To her great credit, Bradley captures her subject at some truly vulnerable moments—at one point we watch her immediate, emotional reaction to the death of her mentor Kobe Bryant—without ever coming off as exploitative. By the time the credits roll on episode 3, the series arrives at two very different but equally strong conclusions: Naomi Osaka is incredible, and talent is a curse.

The Pursuit of Love (Amazon)

The Pursuit of Love, a three-part miniseries adaptation of Nancy Mitford’s classic novel from writer-director-actor Emily Mortimer, comes to Amazon on July 30. An instant best-seller in the UK, the book, which TIME’s reviewer praised in 1946 for how it “plays on the surface of life so wittily and deftly,” cast a gimlet eye on an aristocracy—one that included the author’s family, who notoriously spanned the political spectrum of the time—struggling to acclimate to a new social order. Yet the story’s emotional urgency derives less from Mitford’s sharp satire than from the fiercely romantic temperament of its central character, Linda Radlett. Without sacrificing humor or social commentary, Mortimer thrillingly modernizes The Pursuit of Love by ratcheting up the romance in unexpected ways. [Read the full review.]

The first series of this crowded summer for music on TV that really jibes with the way people of all ages listen is Watch the Sound With Mark Ronson, an Apple TV+ original that debuts on July 30. Looking forward more often than he looks back, host Ronson—the producer behind meme magnet “Uptown Funk,” A Star Is Born mega-hit “Shallow” and Amy Winehouse’s Back to Black—takes on the difficult task of explaining various elements of sound without putting non-gearheads to sleep. An episode on reverb takes him to a disused underground oil tank in Scotland, home of what is probably the longest echo in the world. The show’s format can be playful, too. In a clever illustration of the topic at hand, an installment on sampling fills transitions between segments with collages of sounds and images from other parts of the episode. [Read an essay on the recent glut of post-MTV music television.]

Vacation, all we ever wanted—especially now that travel is starting to feel safe again. So great is the thrill of drawing up an itinerary for the first time in 16 months that it might plunge us into denial of what we know deep down: that vacation is no panacea. It’s a break from work, sure, for those who can actually log off. But our real troubles, the ones that infect our most precious relationships, can’t be checked at the front desk of any five-star hotel. They follow us to our destinations, reframing our every experience, like human remains in the cargo hold of a plane packed with tourists.

This grim metaphor constitutes the opening scene ofThe White Lotus, a darkly hilarious, existentially terrifying HBO miniseries from writer, director, actor and occasional reality-TV star Mike White. In a Hawaii airport, a tourist couple interrogates a somber-looking man (perennial rom-com boyfriend Jake Lacy in spoiled-frat-boy mode) about his honeymoon at a resort called the White Lotus. “Our guide told us someone was killed there!” the woman exclaims. Yes, says the groom; the body is, just now, being loaded onto the plane they’re about to board. Then it occurs to the couple to ask where his bride is. “No offense,” he replies. “Leave me the f-ck alone.” [Read the full review.] 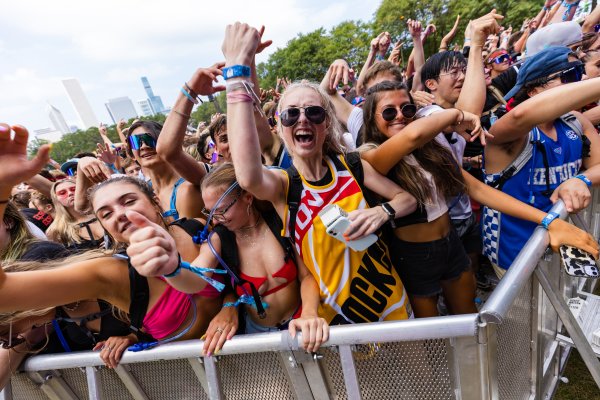 Chicagoans Worry Lollapalooza Was a Covid-19 Superspreader Event
Next Up: Editor's Pick