Those who’ve spent June frolicking in the sunshine—with good reason—may not realize what a peculiar month it has been for TV. There were plenty of great returning shows: Betty, Lupin, Dave, Flack, David Makes Man. Canceled by Netflix just when it was starting to get good, cult cartoon Tuca & Bertie found a new perch at Adult Swim. The series finale of Pose was gorgeous and painful. But few of the highly anticipated debuts lived up to expectations. A-list Stephen King adaptation Lisey’s Story droned on for eight episodes without saying much. Sitcom satire and Annie Murphy vehicle Kevin Can F**K Himself lacked bite. Netflix’s would-be summer scorcher Sex/Life wasn’t hot so much as unintentionally hilarious.

Thankfully, now that the TV universe is so vast, it’s always possible to find something new to enjoy if you’re willing to dig a bit. This month’s highlights include a modern Masterpiece, an offbeat British rom-com, an homage to Anaïs Nin, a musical comedy about finding oneself in punk rock and the darkly funny origin story of an ’80s aerobics mogul. For more recommendations, here’s a rundown of my favorite shows from the first half of 2021.

The series unfurls in the decadent environs of Tangier in 1955. Lucy (Juno Temple at her fizzy best) is an American heiress straight out of a luxury asylum, who’s come to Morocco to marry a broke British lord, Hugo (an anxious Hugh Skinner). Though she radiates free-floating lust, he won’t touch her. What she doesn’t know is that he’s gay; what he doesn’t know is that her arms-manufacturer dad expects him to close deals with Morocco’s French occupiers. Soon to cross paths with this milieu is dominatrix Cherifa (Yumna Marwan, ferocious), who delights in making her “French piggy” clients squeal but is also starting to make the colonial authorities nervous.

Political subtext abounds. Like its inspiration, the show is attuned to sex as an expression of power, though its insights on the topic aren’t entirely new. Better to watch for the escapist pleasure of a jewel-toned melodrama that evokes Fellini and Almodóvar as much as it does Nin.

Physical, a new black-comedy series, chronicles the rise of a ’60s radical turned ’80s workout-video queen. No, it’s not a biography of Jane Fonda. The show’s fictional protagonist, Sheila Rubin, is a far less endearing character. Played with gritted-teeth intensity by Rose Byrne, she’s a frustrated San Diego housewife with a Berkeley degree, a young daughter, an eating disorder and a relentlessly critical inner monologue. When her husband Danny (Superstore‘s Rory Scovel), a philandering hippie academic, loses his job and proposes using their savings to fund a state assembly campaign, she panics. The problem is, she’s already spent that money on furtive, ritualistic binge-and-purge sessions whose secrecy she ensures by checking into a local motel.

Instead of coming clean, she discovers an aerobics gym at the mall, operated by a bleach-blonde, Spandex-clad speed freak named Bunny (British actor Della Saba). When it comes to group exercise, it’s love at first step-touch. Despite Bunny’s rightful mistrust, Sheila starts teaching classes in an attempt to replenish the Rubins’ savings. Eventually, she gets the idea to shoot a workout video. And the deeper she gets into aerobics, the less she seems to need her binges. [Read the full essay on Physical and the end of pop culture’s girlboss obsession.]

It’s a fantasy so common as to be practically universal: a glamorous, charming, desirable celebrity—the kind of person who is the object of thousands, if not millions of crushes—picks you, a mere mortal, out of a crowd of admirers. A fairy-tale courtship ensues. Romance blossoms. You ascend to your rightful place in the cultural and socioeconomic firmament, all because that famous person saw something extraordinary in you that you hadn’t yet discovered in yourself.

Starstruck, a clever British rom-com from comedian Rose Matafeo (Horndog), takes a somewhat more realistic approach to this scenario. One drunken New Year’s Eve, Jessie (Matafeo) and Tom (Nikesh Patel) meet-cute in the men’s bathroom of a club. He’s a mild-mannered movie star frustrated with the shallowness of his industry. She’s a brassy New Zealand expat living in East London, holding down two unfulfilling jobs and nearing the end of her 20s but nowhere close to finding a direction in life. And unlike seemingly everyone else in the world, she has no idea who Tom is by the time they get back to his place that night. So apparently mismatched are they that, when Jessie sneaks out the next morning, the paparazzi assume she’s his cleaning lady. The opposites-attract romance that plays out over the following year probably won’t change your life. But it’s funny and tender and not at all cloying, with a perfect ending that feels earned and effortless at once.

A husband and wife arrange a three-week family tour of Europe as a grand sendoff for their son, who’s about to leave for university. A lovely parting gift, right? But one night in bed, shortly before they’re scheduled to depart, the wife blindsides her husband with the announcement that she’s going to leave him. As she sees it, the trip will be a sort of farewell tour for their family; for him, once he’s agreed to go ahead with what will surely be an emotionally taxing adventure, it’s a chance to win her back. Meanwhile, the boy—like every teenager ever—would much prefer partying with friends his own age to traipsing around world-class museums with parents whose growing unhappiness he can sense.

This is the rich premise of Us (not to be confused with the Jordan Peele horror movie of the same name), a four-hour Masterpiece miniseries adapted from David Nicholls’ acclaimed 2014 novel. And while the European locations—Paris, Amsterdam, Venice, the beaches of Spain—alone would make it worth watching, the show’s greatest strength is the depth it gives the three main characters. Douglas Petersen (the great Tom Hollander) is a high-strung, left-brained, stickler-for-rules scientist who has trouble valuing perspectives that differ from his own. An artist in her youth, his wife Connie (Saskia Reeves, a wonderful, underrated British actor recently seen in Belgravia) is the kind of unconventional woman you’d be tempted to call a free spirit if she wasn’t so clear-eyed and grounded. In poignant, if sometimes contrived, flashbacks to their early years as a couple, director Geoffrey Sax (Tipping the Velvet) demonstrates what brought these two very different people together—and, at times, threatened to tear them apart. Their brooding son Albie (The Dark Tower star Tom Taylor), an aspiring photographer who takes after his mum, has his own reasons for withdrawing from the family unit. As a trio, the Petersens generate some of the most insightful character-driven drama on TV this year, in the context of an emotional story that raises novel questions about what makes a successful relationship.

We Are Lady Parts (Peacock)

For any band formed outside a boardroom, the disastrous first gig is a rite of passage. KISS debuted to an audience of fewer than 10 in Queens. The Velvet Underground regaled an incredulous New Jersey high school with their classic song “Heroin.” And in a new comedy series from Peacock, a fictional London punk act called Lady Parts takes the stage for the first time in a neighborhood pub filled with Union Jacks and jeering white guys. “Your husband let you out the house tonight, did he?” one man cracks when the all-female, all-Muslim quartet takes the stage. They launch into a noisy but triumphant rendition of Dolly Parton’s “9 to 5,” trading looks of pure, astonished joy as the crowd remains bemused.

The scene has infectious energy. Yet what’s remarkable about it is that although it takes place two-thirds of the way through We Are Lady Parts’ electrifying premiere season, it constitutes the show’s first substantive depiction of misogyny and Islamophobia. That’s not to say that the five young women at the center of this show live in some untroubled fantasy-land, or that they don’t struggle over how to navigate their hybrid identities. But creator Nida Manzoor, who wrote and directed the entire six-episode season, understands that it’s possible to tell a culturally specific story without reducing the experiences of so many discrete characters to a constant confrontation with politicized adversity. [Read TIME’s full review] 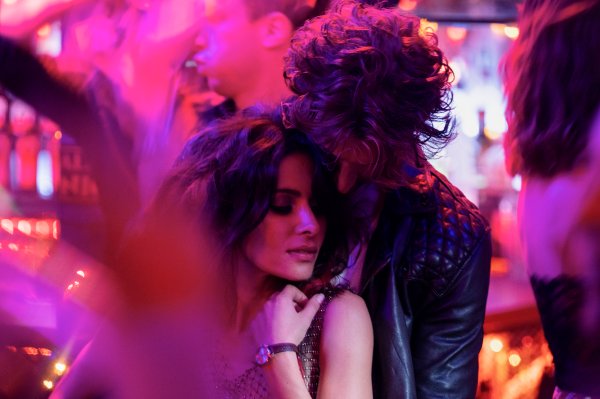