Netflix’s perceptive black comedy The Chair opens at what should be the proudest moment of Professor Ji-Yoon Kim’s career. She has just been named the first-ever female Chair of the English Department at venerable (and fictional) Pembroke University, where she’s also one of very few nonwhite faculty members. At a dire moment for the humanities, when a STEM major looks to many students like the only viable path to repaying their college loans, her colleagues have entrusted her to revitalize the increasingly underfunded, under-enrolled department.

Unfortunately for Ji-Yoon, played by the great Sandra Oh with her signature mix of intelligence, determination and nervous energy, that vote of confidence turns out to be a curse. Her dean (David Morse)—a quintessential academic administrator, laser-focused on optics and budgets yet touchy about being perceived as any less highbrow than his faculty—has a list of unpopular elderly professors he’s pushing her to push into retirement. Two of these tweedy relics, Elliot and Joan (Bob Balaban and Holland Taylor, both perfectly cast), are constantly in Ji-Yoon’s ear, complaining about things like tiny offices, nasty student evaluations and non-traditional teaching methods. Stuffy Elliot bristles when his sparsely enrolled lecture is combined with a sexier class taught by Yaz (Nana Mensah, a standout), a young, in-demand, politically engaged Black scholar whose tenure case he will help decide. It’s up to Ji-Yoon to mediate between each of these competing interests. A common refrain among campus support staff: “Have you talked to your chair?”

Then there’s Bill Dobson (Jay Duplass), who is a constellation of problems unto himself. The department’s resident famous middle-aged male author and Ji-Yoon’s closest ally at Pembroke, he has been unraveling ever since his wife died a year ago. All alone following his daughter’s departure for college, Bill can’t seem to do anything right; he drinks too much, accidentally shows his class an old home video of his half-naked wife going into labor, gives a tongue-in-cheek Nazi salute during a lesson about absurdism as a response to fascism. Of course, when a student posts a split-second video of the gesture, that sarcasm is lost amid viral context collapse. To complicate things further, Bill and Ji-Yoon may be falling for each other. He’s certainly a hit with her adoptive daughter, Ju Ju (Everly Carganilla), an adorable pint-size terror who scares off one baby-sitter before Ji-Yoon even has a chance to leave the house.

Jay Duplass and Sandra Oh in 'The Chair'
ELIZA MORSE/NETFLIX

Thus The Chair, which arrives on Aug. 20, plunges into our latest round of culture wars, amid which elite universities have again become the most symbolic, if not the most substantive, of battlegrounds. The inevitable backlash to Bill’s bad joke illustrates, perhaps a bit too neatly, the real, untenable atmosphere of many contemporary college campuses. Bill is not a Nazi, though his refusal to take the offense he’s caused seriously reeks of selfishness. (“This isn’t about whether you’re a Nazi,” Ji-Yoon hisses at him, after an infuriating meeting with the dean. “It’s about whether you’re one of those men who, when something like this happens, thinks he can just dust himself off and walk away without any f-cking sense of consequence.”) And students who don’t know Bill personally aren’t wrong to recoil at a white professor making white-supremacist hand gestures in the classroom.

It would be easy to make those easily outraged 19-year-olds the villains of this story. But the creators, actor-writer Amanda Peet and writer-academic Annie Julia Wyman, working with a team of executive producers that includes Game of Thrones duo David Benioff and D.B. Weiss as well as Oh, have more in mind than a lazy screed against so-called cancel culture. Pushing the undergrad activists into the background, where they remain as constant and fickle a force as weather, allows the show to focus instead on the machinations of the characters operating in genuinely bad faith: the dean and his bosses, who are so much more concerned with avoiding scandal than about upholding the values of truth and justice that higher ed should embody.

The less-urgent conflicts escalating in the meantime, between Ji-Yoon’s oldest and youngest colleagues, not only push her toward a breaking point, but also demonstrate how a climate of scarcity can poison what should be relationships of mutual respect. A 40-something woman of Korean heritage, she feels caught between cohorts, determined to make space for Yaz, whom she recognizes as a superstar, without sacrificing Elliot and Joan, whose work made her want to join the department in the first place. How can veteran professors mentor younger colleagues when the two factions are set up as rivals, and how can that new generation maintain their predecessors’ high scholarly standards when publish or perish has devolved into self-promote or suffer? And who wants the ostensible honor of chairing a department when all you get out of it is a fancy office and the obligation to serve too many masters, all of whom seem convinced you’re working against them?

Everly Carganilla and Sandra Oh in 'The Chair'
ELIZA MORSE/NETFLIX

The Chair runs into a bit of a pacing problem towards the end of its six-episode season; another two to four installments might have made for a more satisfying, less rushed and glib finale. But it’s probably a good sign that my biggest complaint is that we get too little time with this menagerie of flawed yet generally good-hearted characters. The show works as well as it does because it’s richly observed, wittily scripted, brilliantly cast and subtly acted, with a sense of humor that’s both sophisticated and incisive in its skewering of academia’s particular brand of pretentiousness.

Stories set in the Ivory Tower are often understood to be insular and low-stakes, with little to offer anyone who doesn’t possess a postgraduate degree. Yet to the show’s great benefit, that prejudice doesn’t prevent Peet and Wyman from broadening its horizons. “I don’t feel like I inherited an English department,” Ji-Yoon tells Yaz at one point. “I feel like someone handed me a ticking time bomb because they wanted to make sure a woman’s holding it when it explodes.” Sounds familiar! Without denying the quirks of the academy, The Chair finds in its administrative headaches a surprisingly apt metaphor for systemic ills. What could be more relatable than a cast of characters trying to do good work within an ever more complicated, unjust and indifferent system that forces them to compete with each other for scarce resources? 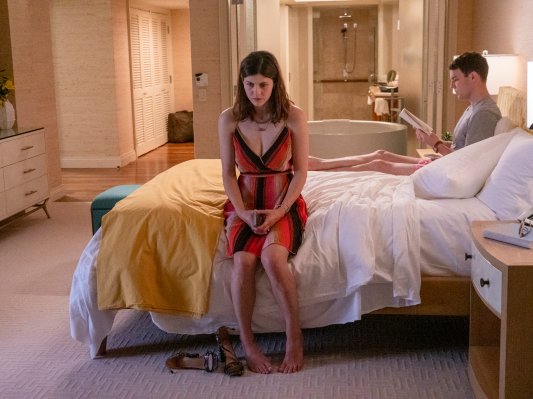 Alexandra Daddario on the White Lotus Finale and Rachel's Big Decision
Next Up: Editor's Pick