There’s something distinctly Wes Anderson-esque about The Politician, a semi-satirical take on student government that may be the most hyped new Netflix show of 2019. Debuting Sept. 27, it features lush production design, stylized performances and teens talking like they’re in an Oscar Wilde play. Anderson alums Gwyneth Paltrow and Bob Balaban play the parents of title character Payton Hobart (Dear Evan Hansen and Pitch Perfect star Ben Platt). Though the series unfolds amid the Spanish Colonial mansions of Santa Barbara, the credits are set to twee icon Sufjan Stevens’ orchestral anthem “Chicago.”

In fact, The Politician is the creation of Ryan Murphy (with collaborators Brad Falchuk and Ian Brennan) and the first product of his record $300 million Netflix development deal. His voice becomes so conspicuous as its first season progresses that the show winds up being the purest expression of his sensibility to date. Like American Horror Story, it tackles contemporary anxieties in overwrought yet imaginative ways. Like Glee, it’s about young people figuring out who they are; queerness abounds, though in a post-Pose world, casual fluidity is the rule. Authentic emotion coexists with camp. There’s singing, dancing, violence, stunt casting, side plots ripped from the headlines. The show is a lot. And it seems destined to be both popular and polarizing.

We meet Payton, the superrich son of a doting mom (Paltrow) and hated little brother of twin preppy nightmares Martin (Trevor Eason) and Luther (Trey Eason), in his senior year at posh Saint Sebastian High. He’s applying to Harvard—or, more accurately, lobbying for admission—and running for student body president. Both campaigns are part of his lifelong plan to become President of the United States, an all-consuming goal he shares with the small team of equally precocious kids he’s recruited to help propel him all the way to the White House.

The hitch comes when River (David Corenswet), a handsome jock with whom Payton had an affair, joins the race at the urging of his spiteful girlfriend, Astrid (Lucy Boynton). Gentle and kind, with a moving openness about his mental health, River connects with voters on a human level. Payton, by contrast, works hard and has good ideas but can’t conceal his calculations. River is a shoo-in—until he kills himself.

Murphy & Co. are careful to separate his suicide from his sexuality. But there are plenty of other false notes. Astrid is annoyingly inconsistent. A side plot about Payton’s running mate, the chronically ill Infinity Jackson (Zoey Deutch), quickly goes off the rails; though it’s fun to see Jessica Lange play her deranged grandma, the resemblance to Hulu’s The Act (and the true story it’s based on) falls somewhere between parody and appropriation. Not all of the young actors can keep up with a witty ensemble that also includes Judith Light, Bette Midler and January Jones.

Despite these nonminor problems, I couldn’t stop watching. Murphy productions are never boring, and this one bursts with frothy twists and amusing set pieces. An episode that detours into the mind of a swing voter—a burnout who just wants to ogle boobs—makes its point about the gulf between politicians and their alienated constituents.

Yet it’s Payton who makes the show more than just fun. Though he’s drowned his emotions in ambition, that numbness haunts him. His plight raises the question of whether you can make a positive impact on the world without being a good person—or if inner purity can even hinder that work. Platt makes this internal conflict riveting. “I wanna know you,” Payton’s Harvard interviewer says in the show’s first scene. “The real you.” The request stumps him. But by the end of the season, he’s discovered more of a self than he ever knew he had. 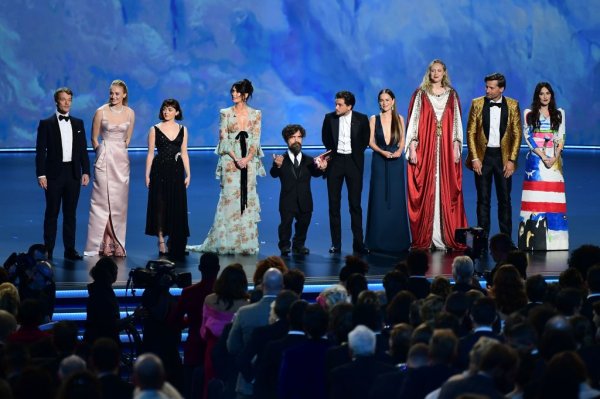 Here's Why Some Game of Thrones Actors Didn't Take the Stage at the 2019 Emmys Last Night
Next Up: Editor's Pick