Keegan-Michael Key is getting animated while discussing the arc of his character Ethan in the Netflix series Friends From College when he’s rudely interrupted. “Sorry, I couldn’t find what you were looking for,” says Alexa—she of the disembodied, faintly robotic voice programmed into Amazon’s virtual assistant, who he’d failed to realize was eavesdropping. “It’s fine, Alexa,” Key sighs. “Stop, Alexa.” Perceptive as she may be, she doesn’t understand the nuances of human behavior quite like Key. During our conversation on a dreary January afternoon in a greenroom before a television interview, he references Aristotle, Konstantin Stanislavski and improv gurus Del Close and Keith Johnstone with a recall that belies the 22 years that have passed since he graduated with an M.F.A. in theater and began studying improv.

The minor mishap between computer and man could be part of an escalating bit from Key & Peele, the sketch-comedy show Key created with Jordan Peele that ran for five seasons on Comedy Central, winning two Emmys and a Peabody Award. For as much as the show was celebrated for its incisive social commentary, particularly about race in America, it also produced hours of absurdist vignettes that took quotidian events—like the interminable lineup of groups invited to board a plane before the average coach ticket holder—to illogical extremes: “old religious people with military babies,” “Jason Schwartzman,” “anyone with a blue suitcase.”

Much has happened since that show aired its final season in 2015: Key and Peele amicably disentangled their professional lives, at least temporarily. Since then, Key has dug into meatier roles, playing Horatio onstage in Hamlet, examining his improv days in Don’t Think Twice and (spoiler alert) getting decimated in The Predator. He’s a busy voice actor (Hotel Transylvania 2 and 3, The Star and Storks, to name a few of his animated films), and you’ve probably seen him in various ads. In Friends From College, which returns for a second season on Jan. 11, Key’s Ethan is one of six New York City pals, 20-ish years out from Harvard, whose nostalgia for the good old days interferes with their ability to live as mature, functional adults.

Unlike the flailing Ethan, who’s exploded his marriage with an affair and traded his literary ambitions for a more commercially viable novel about a boy centaur, Key knows exactly what he’s looking for. “When you stop seeing the borders of the television or cinema screen because you’re relating to the character—that’s what I’m trying to achieve. I want you for one minute, if you’re [watching Hamlet], to be there with us, and then your chair creaks and you go, ‘Oh, I’m in a theater.’ It’s those intangible moments of pure connection.” To be clear: he wants these moments on the stage, on screens big and small, in all manner of genre and scope of project.

Key is underslept after a cross-country flight home to New York City from Los Angeles, where he spent the weekend at Golden Globes parties. (He wasn’t nominated but has arrived at the inner circle that at least affords an invite.) But neither his eager forward lean nor his not-quite-manic but warmly enthusiastic demeanor suggests a trace of exhaustion. He answers questions academically, a philosopher-actor, and it’s hard not to imagine that his perfect diction is a vestige of years spent perfecting soliloquies.

And they’re years he’s been trying to get back to: 18 months ago, while doing press for Hamlet, Key referred to his comedy days—Key & Peele and, before that, five years on MADtv—as a “19-year detour” from the path he’d intended to follow as a dramatic actor. But after some reflection, he sees the past two decades differently. “I’m officially now saying to you: it’s time to retire the phrase detour.” It’s less about veering from the old plan or sticking to the new plan or any plan-based diet, for that matter. “I’m evolving to see that it was meant to be.”

Key describes his current professional state as a “chrysalis,” the adolescent stage of a butterfly. At 47, he’s hardly at the beginning of his career, but he’s still negotiating his reinvention. He sees College, a dramedy, falling somewhere on the bridge to a more expansive future as a performer.

When the show first came out in 2017, many critics found the characters’ behavior too abhorrent to justify, let alone laugh at. Take, for example, Ethan’s self-serving rationalizations for cheating on his wife (Cobie Smulders) as she undergoes grueling fertility treatments. But its cringiness clearly made it compulsively watchable for viewers, whether because of schadenfreude or some brave instinct to face down their own worst impulses. Ethan’s flaws were what drew Key to the role. “To play that lack of reflection, you have to know what it is that he’s not playing. You want people screaming at the TV, ‘Why doesn’t he realize X, Y and Z?!'”

Key was born near Detroit, adopted by two social workers and raised in what he describes as a Midwestern Catholic household. Key & Peele was heavily influenced by its creators’ experiences growing up as what he describes as two biracial “blerds”—a term for black nerds. But until now, as perceptive as Key is about his creative process, there was another connection between his background and his work that he hadn’t yet made: like Ethan and his college fling, Key’s biological parents had an affair, and he was conceived through that union. So does his own origin story help him to empathize with Ethan, whose behavior prompts strangers to approach Key on the street and call him a jerk?

“God, I had never given it any thought until right now.” He takes a moment. “Clearly, that tells us something, doesn’t it? O.K., so what are you locking away, Keegan?” he asks himself. “Maybe I’ll use that in Season 3.” (Alexa, remind Netflix to renew Friends From College for another season.)

The shift from sketch to character work is gratifying for a performer who relishes the Bard, and it’s also a relief. “I don’t know how we would do it,” he says of a Trump-era Key & Peele, in part because the 24-hour Trumpian news cycle would present logistical challenges to producing material that stays fresh. But the show also traded in broad questions about, for example, the safety of a black man walking in a white neighborhood. It was never set up to pointedly criticize a leader like Donald Trump.

Key waits “with bated breath” for his next collaboration with Peele, which he says will be just a matter of time. In 2018, Peele won an Oscar for Get Out, the social thriller he wrote and directed. “Jordan’s very tactical. He will be, in his mind, going, ‘How do I win an Oscar for Keegan?'”

But before that, Key has two high-profile voice roles, in Toy Story 4 (alongside Peele) and Disney’s The Lion King remake (as a hyena). He’s working with his wife Elisa Key—it’s their seven-month anniversary the day we meet—on a spy script with “a racial component.” When he speaks of his love for that genre, his eyes are narrow, his tone hushed: “I want to do period ones where there are no cell phones, so he has to meet her behind the bar: The eagle has landed. The rhinoceros finds its toes. And then you drop the microfiche in the garbage can.” The glee passes like an electric charge through his tented fingers. And as it does, it becomes hard to discern what the detour was after all. But maybe the detours are the point. 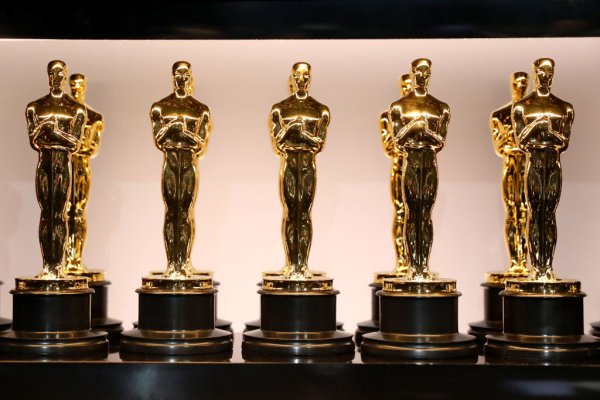 Where to Stream All the 2019 Oscar-Nominated Movies
Next Up: Editor's Pick