Review: Mary Poppins Returns Honors the Spirit of Its Predecessor

We have so much invested in memories that it’s a wonder anything new ever gets made—and yet revisiting treasured texts from the past invites even thornier problems. The “book is better than the movie” brigade is always out there banging their tin pots, refusing to recognize that books and movies are separate modes with different aims and different ways of reaching us. And a comic-book adaptation or Star Wars sequel that fans find crummy becomes the ogre that retroactively “ruins” their childhood bliss.

That’s why Mary Poppins Returns, in which Emily Blunt dares to take on the role Julie Andrews originated on-screen in 1964, presents all kinds of quandaries. But I loved it—and while that doesn’t mean I can ignore its problems, I left it feeling that a little something had been restored to me rather than taken away.

The characters and the basic premise—of a no-nonsense nanny with quasi-magical powers—stem from a series of wonderful books by the Australian-born British writer Pamela Lyndon (or P.L.) Travers, whose first Mary Poppins volume appeared in 1934. Travers sold the rights to Walt Disney much later, and only reluctantly; she was miserable over the movie he made from her material, believing he’d trivialized and cheapened it. But Disney’s Mary Poppins, anchored by Andrews’s nimble, assured performance, is its own creation, quite a few soft-shoe steps away from anything Travers might have wished it to be. Despite the misery it caused her, it’s wonderful in its own right, and a touchstone for people now in their fifties and sixties, many of whom have passed it along to their children. As for me, it was among the first movies I ever saw in the theater, at age three, and even today I can’t tell you whether it’s definitively “good” or “bad” as a film. I loved it so much, and was so overwhelmed by the experience of seeing it, that it essentially entered my bloodstream. I don’t think it’s possible to review your own platelets.

So by the logic that precious childhood memories should remain unsullied forever, I should have hated Mary Poppins Returns. But there’s something naggingly irresistible about director Rob Marshall’s reimagining of that earlier Travers-filtered-through-Disney idea, beginning from the moment Blunt’s Mary floats down from the sky just at the moment she’s needed—even before the people she’s condescending to help know that she’s needed. The movie is set 25 years after the earlier movie took place: Brother and sister Michael and Jane Banks (Ben Whishaw and Emily Mortimer, both wonderful) are now grown, and Michael, a widower still grieving for his lost wife, lives in the Banks family home with his three young children, Anabel, John and Georgie (Pixie Davies, Nathanael Saleh and Joel Dawson). Michael is a failed artist who has taken a part-time job to make ends meet, and still, they’re not meeting—he’s in danger of losing the house. Jane, a labor activist, is doing her best to help, but Michael just can’t cope. The return of their old nanny is just what they need, and yet they blanch a little when they see her coming. It’s all well and good that she drove their parents a little nuts with her “help”; now it’s their turn to be the responsible, problem-solving adults, while she takes the kids on marvelous imaginary—or are they?—adventures, which here include an undersea reverie that begins in the bathtub and a twilight jaunt into the secret world of London’s lamplighters.

Some of the numbers are dazzling, some are exhausting, and many are a mix of both—and still, somehow they work. The songs, by Marc Shaiman and Scott Wittman, are one of the movie’s weak points: In general, they have a flocked-wallpaper quality, at once aggressive and anonymous. But a few of them, like the music-hall high kicker, “A Cover Is Not the Book,” and a ballad about mourning those we’ve lost, “The Place Where the Lost Things Go,” stand out in relief. Lin-Manuel Miranda plays a lamplighter, Jack, and wisely, the movie doesn’t try to turn him into Mary’s love interest. Instead, the two simply get lots of chances to sing and dance together, and they play off one another like old friends—every shuffle and twirl is a gesture of mutual admiration, played, with a touch of vaudevillian broadness, for the benefit and delight of the audience.

Marshall doesn’t always have perfect control over his creation. He grabs for brass-ring obviousness in places where subtlety is what’s needed: In the editing, he uses too many reaction shots of Miranda laughing and grinning. As likable as Miranda is, we don’t need him to signal to us that we’re supposed to be having a good time. But he and his cinematographer Dion Beebe know how to present Blunt’s Mary to best effect: She’s sly and mysterious, generous in only an offhanded way. There’s something vaguely sinister about the character of Mary Poppins: This woman shows up out of nowhere to create illusions that little kids believe to be real, only to reassure them later that they imagined it all, or maybe they didn’t. You really shouldn’t mess with little kids’—or anyone’s—heads that way. But that’s part of the genius of the character: She throws you off your footing, and your thinking shifts by a half-turn, just enough to make a difference. Blunt, both businesslike and mildly flirtatious, with a know-it-all smile, captures that essence beautifully. You’re drawn to her even as you’re a little afraid of her. In that sense, she’s closer to Travers’s original vision of the character than she is to Julie Andrews’s interpretation, as indelible as the latter is.

Marshall, to his credit, knows that anyone who was affected by the earlier film is likely to approach this one with caution, if not outright hostility. He and Beebe take care to honor the look of the original, particularly in the movie’s dazzling centerpiece, the “Cover Is Not the Book” number, a blend of live action and 2D animation that’s almost hallucinatory in its festooned excess—I mean that as a compliment. And Sandy Powell’s costumes are so astonishing it would be hard to imagine the movie without them. The children, in their little belted coats and Fair Isle berets, are like mini-grownups, lending some dignity to the state of childhood without betraying its energy or spirit. Mortimer’s Jane has a wardrobe of loose, sensible tweed trousers jazzed up with vests, blouses and scarves in grasshopper greens and watermelon pinks. (One remarkable jacket, made of Shetland wool in fairy-tale forest colors, incorporates stripes and miniature checks—it may sound kooky, but the effect is pure joy.)

But the most extraordinary costumes are the ones Powell has devised for that partially animated sequence: The human actors, newly dropped into a cartoon world, wear dresses, coats and trousers in muted mauves and blues and roses that appear to have been brushed on the cloth with watercolors. The details—buttons and bows, ruffles and stripes—look as if they’ve been drawn on with black ink. This tromp l’oeil illusion is so magnificent that afterward, you might think you’d dreamed it. Mary Poppins, eminently sensible and preferring to cultivate the same respect for rationality in others, might assure you that you did. This time, ignore her and trust your own eyes. 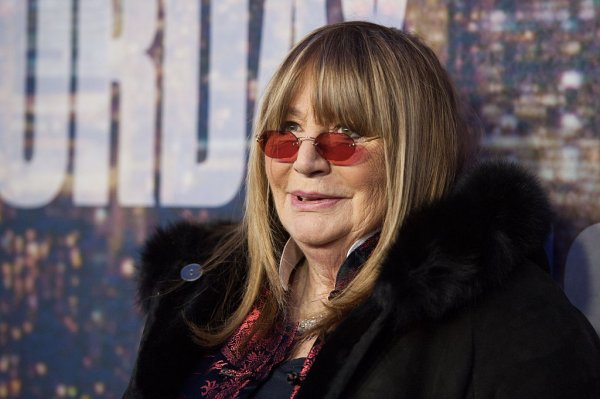 Penny Marshall Played an Underachiever on TV. In Real Life She Was Anything But
Next Up: Editor's Pick