In Julianne Moore’s Gloria Bell, Women Over 50 Get the Movie They Deserve

There, I’ve said it. If half of you have fled, no one blames you, because even those who have been through it—or are getting ready to do so—don’t really want to think about it. How many times have we heard the word menopausal used as a pejorative? When our culture deals with it at all, it’s usually through television, via hot-flash jokes or accidental-pregnancy scares on shows like Ab Fab or Sex and the City—not that there’s anything wrong with laughing about it. But movies, more costly and risky to make—and, these days, targeted toward a younger and more lucrative audience—rarely touch on the subject. Even in the past few years, as we celebrate the fact that there are more and better roles for actresses 50 and older (Glenn Close, Annette Bening), as well as those in their forties (Toni Collette, Olivia Colman), so few of those roles allow for women characters to be sexual beings. They’re women dealing with losing a parent, or wives being in the shadow of their husbands, or moms being remembered by their kids years after the fact. Those are all true-to-life angles of being middle-aged, but there’s more to women than the experience of being mothers, wives or daughters.

We would likely see more variation if there were more fiftyish women directing movies. But for now, at least we have Gloria Bell, made by a man—Chilean director Sebástian Lelio—but so in tune with the experience of its middle-aged title character that it reminds us of something we’ve lost in the conversation over who’s entitled to tell what stories: Never underestimate the power of the sympathetic imagination.

Julianne Moore plays Gloria, a fifty-something woman living in Los Angeles—she’s divorced, with two grown children who no longer need her in the way they used to—who goes to a singles bar to dance, to drink, to maybe meet a guy, in precisely that order. She gets the most pleasure on the dance floor, at this club (seemingly mythical) that caters to over-50s, playing the music that defined the late 1970s and early 1980s for those who knew that disco didn’t suck. Gloria Gaynor’s “Never Can Say Goodbye,” Earth Wind and Fire’s “September:” For Gloria, there’s no music from any era later than the ’80s, though that doesn’t necessarily mean she’s stuck; it’s simply that around that time, other things rushed in to fill her life—marriage, babies—and only now is she able to reconnect with the joy of being a girl on the dance floor, in all its celebratory wistfulness.

By day, Gloria has a desk job she seems to neither hate nor love. She checks in on her kids, ending her voicemail messages with a declarative “I love you!” followed by a more hesitant “It’s your mother.” At a routine eye exam, her doctor tells her that she has glaucoma, though he doesn’t call the disease by its name. Drops can control it, he tells her. But when she asks how long she must take them, she looks vaguely unsettled by the answer: For the rest of her life.

In your fifties, you start seriously wondering what “the rest of your life” actually means. On the one hand, you’re starting to feel a little old—so the rest of your life may not be that long. On the other hand, because most of today’s 50-year-olds are healthier than those of 30 or 40 years ago, you might still feel invincible, with so many things you want to do. To people in their twenties, 50 seems ancient. But as of 2019, women who were listening to Bikini Kill and Liz Phair and Hole in college, as those acts were just breaking out, are now likely to be in peri-menopause. That’s not a curse, just a fact—menopause is hardly the end of the world, though rarely does anyone address it in movies or pop culture, which may be part of the reason women dread or fear it.

The word menopause, like glaucoma, isn’t mentioned once in Gloria Bell. There are no easy hot-flash jokes, no references to any of the physical effects or annoyances. The movie doesn’t need them: Moore’s performance, every moment of it extraordinary, says it all. Her Gloria is in the midst of a time of discovery and unease, coming at her in alternating waves. She’s undeniably attractive, but not necessarily in a bombshell way: Her oversized glasses make her look like a sexy owl. She’s reasonably self-assured, but in this bold new territory, it’s not as easy as it used to be earn a man’s love. Still, she’s met a guy she likes, Arnold (John Turturro, in a perceptive, multi-toned performance), a former military officer who runs a recreational park for grownups, a place where dudes go to play paintball. Gloria proceeds cautiously, but moves more quickly when she starts to feel she can trust him—only to realize that maybe she can’t.

Moore has a semi-nude scene in Gloria. Because we see so little nudity these days, certainly in mainstream movies, it’s at first mildly jolting. But as we settle into it, it becomes one of film’s most breathtaking moments, a place where Gloria’s spirit and Moore’s intertwine. Gloria and Arnold are in bed, just after sex, and she’s telling him about a program she heard on the radio: The gist is that because our cells are constantly renewing themselves, our bodies are younger than we think. It’s an optimistic, cheering idea, and Moore as Gloria—youthful-looking but not hard and stretched in the way so many women are, striving to sculpt themselves as they age—is a living testament to this idea. In this scene, she’s like a snail without a shell, pale and vulnerable and singular. This is part of a woman’s experience in middle age: Just as you’ve gotten used to yourself, your body changes in ways you might not recognize. You’re a familiar stranger; reckoning with that is both wondrous and unsettling.

Gloria wants a man—or maybe she’s so in the habit of wanting a man that she can’t be sure whether she wants one or not. Gloria Bell hints at both possibilities. Gloria is at the age when the hormones that, according to science, most define us as women start to dwindle, just as our DGAF hormones kick in. Even if it’s ultimately a win-win situation, there’s no denying the feeling that something is being taken away from you, maybe before you’re ready to let it go. Very few actresses currently working, of any age, will agree to a nude scene. The reasons are understandable: In the ‘70s, ’80s and ’90s, women were often told by male executives they had to do nudity in order to further their careers. That was manipulation, a clear bid to control them. So in terms of how the business works, and of how actors build their careers, we shouldn’t mourn the loss of nudity in movies. But for artistic reasons? What a loss! There should be more male full-frontal nudity, too, when it makes sense for the story. Movies have lost something—a spirit of freedom and carnal joy—that Gloria Bell, in some small way, restores.

I remember listening to my male colleagues around the time Sideways came out: They spoke, sometimes with anguish, of how deeply they connected with this story of a disappointed middle-aged guy, played by Paul Giamatti, who reconnects with a lost part of himself during a trip through California wine country. (His epiphany is ignited when a gorgeous, seemingly unattainable woman, played by Virginia Madsen, falls in love with him.) I didn’t much care for Sideways, though I could appreciate its comic-melancholy vibe. And if it spoke to so many middle-aged men—men who were in their 40s at the time, as I was—who was I to discount their experience? But in the world of American movies, women didn’t really have an equivalent. To want one seemed too much to ask. It’s time to ask.

With Gloria Bell, Lelio revisits a story he’s told before: It’s a close remake of his 2013 Spanish-language film Gloria, starring the superb Chilean actress Paulina García. Both films are terrific, but with Gloria Bell, Lelio may have buffed out a few rough edges; the new picture feels subtler, more shimmering. Ideally, we’d want a movie like Gloria Bell to have been made by a woman. That makes sense in the narrative we so desperately want to believe in today, that only women can truly tell women’s stories. But if we really want to understand how men’s and women’s roles are changing and need to change, let’s acknowledge that it’s our humanness, more than our definition of gender, that allows us to understand one another. We’re all so angry about “the other”—whomever that “other” might be—that it has come to stand in the way of understanding ourselves. Gloria Bell helps bring us back to that self, whoever he, she or they might be. 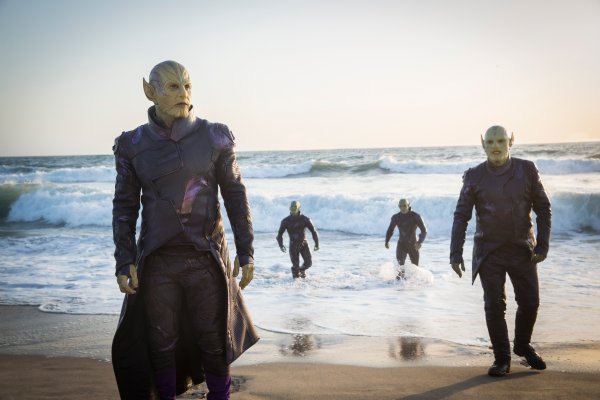 Who Are the Aliens in Captain Marvel? Everything to Know About the Krees and Skrulls
Next Up: Editor's Pick