How the New Emma Movie Updates the Relationship at Its Core

Jane Austen‘s beloved 1815 classic Emma is saddled with some serious 19th-century baggage: namely, that the romance at its heart pairs the fresh-faced, 21-year-old titular protagonist with a gentleman 16 years her senior, with all the power imbalances attendant to both their age gap and the gender norms of the era. For the new movie adaptation (stylized as Emma.), the solution to this is fairly simple: cast the lovable Johnny Flynn as the male lead, mostly ignore their ages altogether and add human moments of flesh and passion to Emma Woodhouse and George Knightley’s story, turning the romantic interest’s paternalistic tendencies on the page into something a little more palatable for a 2020 audience sick of mansplaining.

At least, that’s how director Autumn de Wilde and screenwriter Eleanor Catton approached the challenge in their colorful, witty take on Austen’s novel. Emma — like all of the author’s best-known books — is a comedy about love, a Shakespearean maze of relationships and miscommunications that, in the end, get tied up neatly with velvet ribbons. Ahead of its time, it features a complex female character and centers women’s interior lives, turning the seemingly mundane (everyday romantic dalliances) into the monumental (the struggle to survive during a time with limited options). The new Emma., starring a doe-eyed Anya Taylor-Joy opposite the scruffy, earthy Flynn as Knightley, hews closely to the original’s staid social norms, costume finery, decadent country estate settings and period-specific dialogue. It’s funny and fresh (see: flashes of nudity; Bill Nighy’s pitch-perfect comedy beats; a sugary, meticulous aesthetic that lands somewhere between Wes Anderson tweeness and Sofia Coppola’s Marie Antoinette) — though Clueless it is not. Yet in a sly move, de Wilde and Catton update the romantic relationship at the center of the story, turning Knightley from a safe — but questionably older — choice into a more appealing object of affection.

When we meet the gentleman Knightley on the page, it’s as Emma’s older brother-in-law and neighbor. We learn early on about their significant age gap, and that their relationship has an unequal power dynamic, exemplified by Knightley’s gentle admonishments of Emma’s behavior. In conversations with others about Emma, Knightley remains astute but cool, telling her friend Mrs. Weston of the faults he finds: “She will never submit to anything requiring industry and patience,” he laments. And: “Emma is spoiled by being the cleverest of her family.”

But he tempers his critiques with a superficial compliment: “I love to look at her.” In Austen’s world, disparities of age and power between potential matches were par for the course; women were ushered at young ages into the safety of matrimony, the goal ultimately to match with the wealthiest possible future husband and protector. (See also: Marianne in Sense and Sensibility.) Back then, with few options to earn income for themselves, this was necessary for survival. Today, however, this reads as antiquated, if not a little creepy. As for Knightley? His conversion from Emma’s mentor to her lover is slow and subtle; he grooms Emma into a better person with advice and criticism handed down from a superior. Patriarchal love is embedded in the story, even if Austen makes sure that Knightley learns some lessons by the end, too.

But de Wilde’s take on the characters offers something both spicier and more equal, particularly in softening the characterization of Knightley. In one early scene, Flynn strips down to complete nudity while changing clothes, a moment of bodily vulnerability never seen in Austen’s writing. In interviews, de Wilde has explained her desire to flip the script a bit on period pieces that traditionally objectify the female form.

In another scene, he flings himself to the floor of his lavish, empty estate, helplessly exhausted and lovelorn, a peek into his emotional state which the novel doesn’t offer. And when he chastises Emma for cruelly making fun of a friend, he does so fervently. “It was badly done, Emma,” he explodes at her, raising his voice. The quote is nearly the same on the page, but it’s said as part of a longer and more measured monologue. Flynn’s delivery transforms its meaning, from a moral lesson into a moment of justified passion. Taylor-Joy’s Emma snaps right back. English gentry aren’t known for their displays of emotion, especially in the sedated world of Austen, so there’s something shockingly modern about their exchange. Later, there’s even that big Regency-era transgression: a kiss.

It helps that Flynn, best known to U.S. audiences for playing the eternally jilted main character in the Netflix rom-com series Lovesick, channels Knightley with a kind of boyish intensity. (In real life — and typical Hollywood fashion — he is 13 years Taylor-Joy’s senior, although he comes across younger in character.) The lessons he tries to impart to Emma — about refraining from meddling, about the realities and responsibilities of social class, about kindness — are not delivered with tact, but with real emotion, often clumsily. Crucially, his character’s age — and their age difference — is elided onscreen, leaving us to draw our own conclusions about their appropriateness for each other. The result: a worthy pairing, the kind contemporary audiences can root for instead of feel conflicted about. Flynn has admitted in interviews that Knightley is a bit of a “mansplainer.” But he tried to play it from a less didactic — and more romantic — angle. “What I like is that he’s tortured about it,” he told the Radio Times, “and he’d rather not be, and he apologizes for it. I think he explains what the feeling is behind it, and I think there’s a lesson for men in there somewhere, like being open to evolving.” (That evolution is also in the text, as Knightley recognizes his own faults by the end.)

Emma has been adapted at least a dozen times for film and TV. The most recent movie adaptation came out in 1996, starring a fresh-faced Gwyneth Paltrow as Emma and the refined Jeremy Northam as Knightley. They play their parts with tenderness and respect; their partnership is a foregone conclusion that only they cannot see, and Paltrow imbues Emma with a sweetness that Taylor-Joy exchanges for coyness. Paltrow’s Emma is a little too full of herself, but ultimately young, guileless and good-hearted; Taylor-Joy’s Emma, meanwhile, is a little too aware of her power and position, consciously using her femininity and status to get what she wants. (And when she messes up and her plans go awry, her pain feels sharp.) By drawing out the pricklier and more complex character that Austen originally wrote, de Wilde confirms her potency as a woman in charge of her destiny.

In fact, this movie’s read on Emma is a little more in line with what goes down in the original Austen — and in Clueless, Amy Heckerling’s 1995 masterpiece that catapults the character through space and time, rendering her as a modern Valley Girl. Emma is one of Austen’s most acerbic stories: she calls her protagonist “handsome, clever, and rich, with a comfortable home and happy disposition” who “seemed to unite some of the best blessings of existence; and had lived nearly twenty-one years in the world with very little to distress or vex her.” You can read this as an endorsement, but you can also pick up on it is deadly-dry humor, which both Heckerling and de Wilde latch onto in their renditions. Alicia Silverstone‘s Cher and Taylor-Joy’s Emma share a vanity and self-assuredness that make them both masterminds and subjects of the joke — but never passive players. That part of Emma, at least, never needed a modernization.

Updating the sexual politics and power dynamics of old stories for new audiences is hardly a new concept. Greta Gerwig did it in Little Women, doubling down on the economic considerations of single women in the 19th century and redrawing Jo March’s ultimate match into one who’s more appealing to romantics and feminists alike. (Though Gerwig also said she found many of those themes right there on the page, captured 150 years ago by Louisa May Alcott.) 10 Things I Hate About You, released in 1999, remixed Shakespeare’s The Taming of the Shrew, with Julia Stiles in fine feminist form. And it’s not just heroines of yesteryear who have gotten a 21st century revision, but also characters introduced more recently — thanks to Hollywood’s reliance on preexisting IP, they’re revisited more than ever. Adaptations like Hulu’s teen drama Looking for Alaska, based on John Green’s 2015 young adult novel, gave its lead more agency. Even female superheroes (and antiheroes) have gotten revamped; Harley Quinn, who debuted in 1992, traded in her stilettos for more practical sneakers in this year’s Birds of Prey. After years of demanding more equality onscreen we are — finally — starting to see it more regularly.

Not that Austen’s stories need too much brushing up. They’ve always been about women finding their way in the world, bristling against the pressures of female perfection. In Austen’s slice of 1815 society, that meant something very different than it does today. But a few things really are universal across the centuries, from the original to its many retellings: Emma always says she isn’t looking for love, but in the end, she finds one anyway. In the new Emma., she also gets an equal. 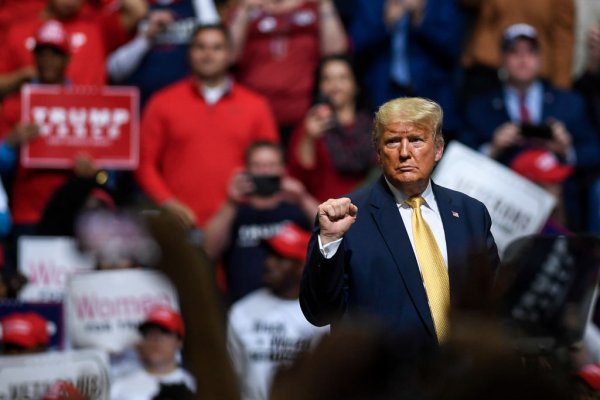 Where Trump's 'Parasite' Attack Fits in Hollywood History
Next Up: Editor's Pick