In the days before her novels were adapted into swoony TV miniseries, reimagined as zombie-themed novelties and spun off into little gifty-type advice books, Jane Austen felt like a well-kept secret. Before Austenmania took hold, scholars studied her and avid readers adored her—she was hardly obscure. But suddenly, people in book clubs everywhere were reading, and adoring, her. Longtime Austen lovers, even if they rejoiced in her posthumous superstardom, couldn’t help feeling a little miffed. After all, they knew her way back when, long before Colin Firth, in the much-loved 1995 TV adaptation of Pride and Prejudice, Mr. Darcy’ed just about everyone off their feet.

But there’s no reason to be snobbishly proprietary of Austen. Like a great pop song that can survive being used in a car commercial, she is, and always will be, for everyone to enjoy—and most important, there are always younger audiences waiting to discover her. Autumn de Wilde’s bright and lively adaptation of Austen’s 1815 novel Emma—its title is Emma., with a definitive period—feels both modern and authentic in the best way, inviting everyone, diehard Austenites and newbies alike, into its embrace.

Anya Taylor-Joy plays 20-year-old Emma Woodhouse, a woman of leisure who’s mildly bored but usually kind. She lives in the comfortably appointed house where she grew up, with her father, Mr. Woodhouse, who does not suffer fools. (Bill Nighy plays him, in a performance that’s one long, delectable sigh of exasperation). Emma’s older sister has married and left home; Mr. Woodhouse nurses a comic grudge for this transgression, and Emma sees no reason to marry and leave home herself. She’s content, instead, to spend her days making matches for her friends.

Her latest victim is Harriet, a guileless naïf whose family origins are uncertain. (She’s played by Mia Goth, who has some of the dewy winsomeness of Shelley Duvall.) Emma knows Harriet needs to make a good marriage to survive, and pushes to fix her up with the snobby local vicar, Mr. Elton (Josh O’Connor), even though Harriet really loves a successful local farmer, Mr. Martin (Connor Swindells). Emma has had success in making matches before, and she believes her methods are foolproof—that certainty is the surest recipe for disaster when it comes to affairs of the heart. Meanwhile, a longtime family friend, the brother of Emma’s sister’s husband, observes Emma’s meddling with amusement and sometimes with alarm: George Knightley (Johnny Flynn, the right mix of raffish and gentlemanly) tries to advise Emma when he sees her on the wrong track. Because she’s too stubborn and willful to accept advice—especially from someone who irks her, as Knightley does, for reasons that are obvious to the audience but not to this perfectly matched pair—she digs the heels of her dainty Georgian slippers in harder, only to make a bigger mess.

Emma means well, and she’s charming and witty and well-liked by almost everyone. But she also hasn’t lived—her folly lies in thinking that arranging the affairs of others is the same as experiencing life for herself. And she is, as we see, capable of tremendous, snobbish cruelty: At one point she unleashes a careless insult on a kind friend (Miranda Hart, in a sweetly dithery performance), which almost turns Knightley against her for good.

Knightley and Emma are creatures of their society, bound by its rules and its decorousness. But de Wilde makes it clear that they can’t be fully tamed. Tenderness is an impulse that springs from the heart; Emma and Knightley just need to learn how to set it free. Watching them grow into that realization is one of the great pleasures of a movie that’s full of them. When Emma and Knightley attend a dance, the precision of the steps—and all the rules of where the arms and hands should go, and where the eyes should be focused—appear limiting. But de Wilde shows that this ritual is a place where freedom and wonder can blossom within the safety of structure. It’s here that we see hard proof of what we’ve intuited all along: that Emma and Knightley are made for each other.

The actors who play them are wonderful, together and separately. Taylor-Joy, whose searching, wide-set eyes give her the mysterious beauty of an elegant reptile, makes a crackling transition from Emma’s too-cool-for-school ennui to a state of being where the very air around her feels electrified with uncertainty. And Flynn’s Knightley, who looks a bit scrappy and rough even in his evening clothes, meets her with perfect ease under that supercharged bower of romance. (Flynn is also a musician, and you’ll want to stay through the credits to hear him sing “Queen Bee,” a folk ballad he wrote that’s worthy of Fairport Convention.) Knightley woos Emma, at first unwittingly, by making her feel uncomfortable, but she needs that challenge to lift her out of a rut that threatens to swallow her. And Emma has the lightness Knightley needs: His features look softer, younger, when she’s by his side. At her best, she’s a reflector and magnifier of joy.

De Wilde is an experienced photographer, focusing largely on musicians, and she’s directed music videos for Beck, Rilo Kiley and the Raconteurs. Emma. has no first-feature shakiness. Rendered in sugar-almond tones of blush pink, daffodil yellow and ice blue by cinematographer Christopher Blauvelt, production designer Kave Quinn and costume designer Alexandra Byrne, Emma. is as confident and gorgeous to look at as a tower of exquisitely rendered petits fours. We’ve seen quite a few versions of Emma in the past quarter-century: A 2009 BBC series starring Romola Garai, a 1996 film featuring a pre-jade egg Gwyneth Paltrow. (As, hopefully, we stride into a new era of nontraditional casting, you could argue that an Emma adaptation, or any Austen interpretation, doesn’t need to have an all-white cast—a thought for filmmakers of the future.) Amy Heckerling’s glorious 1995 Clueless, featuring Alicia Silverstone and Paul Rudd as modern-day Emma-and-Knightley stand-ins, may be the most well-loved reading. This Emma—or Emma.—stands proud next to that one; it’s a breezy modern classic. Austen, always respected by lovers of literature, is now also a certified rock star. But if de Wilde is fully in tune with that timeless pop sensibility, she allows Austen her dignity too. Austen couldn’t have imagined a future of Regency cosplay and Pride and Prejudice coffee mugs, and she couldn’t have conceived of movies, period. But her books, works of spirit and intelligence with great bones, are like songs that people can’t resist covering. Consider Emma. the work of a great tribute band. 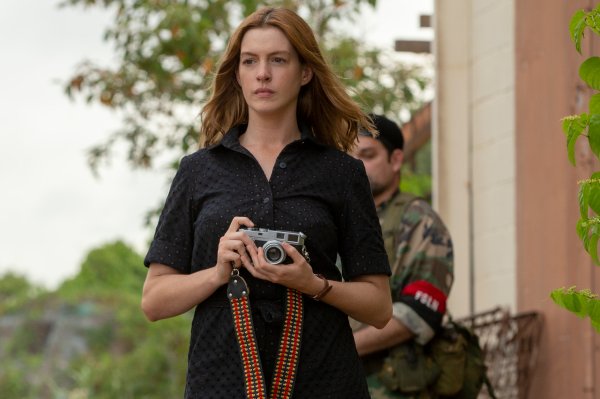 'The Last Thing He Wanted' Makes its Audience Work too Hard
Next Up: Editor's Pick