For those of us who realize that adrenal fatigue isn’t a medical diagnosis and appreciate crystals solely for their beauty, it’s hard to get too far into any episode of The Goop Lab With Gwyneth Paltrow without raising an eyebrow. In the six half-hour installments that hit Netflix Jan. 24, Paltrow and her staff at the “modern lifestyle brand” explore all manner of fringy practice. Yet the show’s most perplexing exchange comes early in a relatively grounded episode on female pleasure, when Paltrow introduces the famed nonagenarian sex educator Betty Dodson and announces they’ll be talking about vaginas. “The vagina is the birth canal only,” Dodson points out. “You wanna talk about the vulva.” This is evidently news to Paltrow. “The vagina is only the birth canal?” she exclaims. “I’m getting an anatomy lesson.”

I wouldn’t usually be taken aback by such a response; if anything, women’s ignorance about our bodies speaks to the state of reproductive-health education in the U.S. But Paltrow is the founder and CEO of a company that is quite notoriously in the business of telling its mainly female audience what to do with their private parts. Goop has, over the years, endorsed vaginal steaming (which has no health benefits but can result in burns) and hawked a $66 jade “yoni egg” that was supposed to balance hormones—a false claim that not only exasperated gynecologists, but also led to $145,000 in civil fines. Earlier this month, Paltrow made headlines for selling a $75 candle called “This Smells Like My Vagina.” (Did she really mean “vulva” then, too?)

The point isn’t that Paltrow is stupid. She definitely is not. She’s a wildly successful actor turned wildly successful businesswoman who transformed a newsletter about cool stuff she’d bought and done into a company worth over $250 million at its most recent public valuation, in 2018. In Goop Lab she comes off as neither a judgy, spin-class mean girl nor a stereotypical Hollywood airhead, but as sharp, wry, skeptical, energetic, irreverent and mostly self-aware. (She has a tendency to declare especially woo-woo comments “goopy.”) As with the brand itself, what’s disturbing about the show is that when you combine Gwyneth’s aura of trustworthiness with a mishmash of real science, New Age nonsense, vague female empowerment rhetoric, naked commercialism and some startling knowledge gaps in areas where Goop claims expertise, the result has its unique dangers.

Episodes can be viewed in any order, and they all begin with Paltrow recounting her transition from movie star to mogul as well as explaining that Goop’s ultimate goal is “optimization of self,” whatever that means. Each installment is framed by an interview—filmed in an airy white space that’s warmed up by pale-pink accents, thriving houseplants and a wall of windows—in which Paltrow and CCO Elise Loehnen discuss a different wellness-related topic with a prominent voice in the field. Interspersed with each chat are clips of Goop staff trying regimens that range from diets to ice-water plunges aimed at mitigating stress and strengthening the immune system. (Parents desperate to convince their kids that drugs aren’t cool should consider screening “The Healing Trip,” in which Elise takes employees to Jamaica, where psilocybin mushrooms aren’t regulated, to “explore psychedelics in a therapeutic setting.” Because what’s more chill than tripping with your boss?)

On 'Goop Lab," the company's employees are the guinea pigs.
Adam Rose/Netflix

There is a marked difference between the show’s vibe and the messy Goop of 2017, which sold “healing” stickers supposedly made from “NASA space suit material” (NASA’s memorable response: “What a load of BS this is”). That’s surely by design. In an interview last fall, Paltrow talked up a newly hired team of researchers that vets the health claims of the products she sells. Goop Lab reads as a similar extension of recent efforts by an e-commerce brand to expand its appeal beyond those who either don’t know or don’t care that Goop was found to be selling some of the same questionable substances as Alex Jones’ right-wing conspiracy site Infowars. The show’s pseudo-clinical backdrop, patient testimonials framed as “case studies” and frequent citations of research papers lend it an air of legitimacy. Many interview subjects have a doctorate of some sort. And you can’t underestimate the power of not only Paltrow, but also her fit, conventionally attractive, fashionable (as well as largely young, white and female) staff to communicate that you can believe in alternative medicine without being a crazy hippie.

That gloss helps to obscure the harder-to-swallow aspects of Goop Lab, which often has the feel of a high-end infomercial—whether for a “fasting-mimicking diet” ($249 at Goop) or the services of a particular practitioner or for Goop itself—rather than an investigative docuseries. Some episodes are more than just distasteful. In “The Energy Experience,” chiropractor-to-the-stars John Amaral—with his acolyte, “integrative physician” Apostolos Lekkos, DO—appears to induce horror-movie body contortions in a few Goopers while barely touching them. We see patients of this energy healer attest to his efficacy in treating everything from psychological trauma to, in the case of a 57-year-old lymphoma survivor, chest-down numbness. This and other episodes simulate authority by cherry-picking studies that may be legitimate but certainly don’t place controversial therapies in proper context. (In an Ars Technica piece that dissects the series’ scientific claims, a physicist responds to Amaral’s episode by lamenting, “Quantum mechanics does not provide you with the mental power to balance energies, find lay lines, or cure syphilis. It does, unfortunately, seem to provide buzzwords to those prone to prey on the rich and gullible.”)

Finally, there’s “Are You Intuit?,” an even wilder episode about psychics that’s premised on the presumption that those who call them charlatans are just close-minded. A vignette in which medium Laura Lynne Jackson (who eschews turbans in favor of platinum “rich-girl hair” and a business-casual wardrobe) attempts to contact the dead relatives of a token skeptic but ends up accidentally “reading” a crew member—who promptly bursts into tears—seems suspiciously coincidental, if not fully staged. The scene does a disservice to more credible experts, like Dodson, and more convincing episodes, such as the one on psychedelics.

Is unbiased health information too much to expect from a TV show? Maybe. Each episode of Goop Lab does begin with a disclaimer: “The following series is designed to entertain and inform—not provide medical advice. You should always consult your doctor when it comes to personal health, or before you start treatment.” (The statement raises at least one big question: What’s the difference between “informing” and “advising”?) But let’s be real: Because health-care costs soar, millions of Americans remain uninsured and many who do have insurance struggle with high deductibles—and also because some complementary practices, like yoga and acupuncture, really have proven effective in clinical tests—a huge number of patients are trying alternative medicine, often without consulting their physicians. Despite the obligatory disclaimers, they can find reams of unfiltered claims on the internet and TV (which allows pharmaceutical companies to access consumers directly, by way of drug ads). Medical disinformation is an epidemic. With its clinical aesthetic, thin veneer of skepticism and authority reinforced by an aspirational celebrity businesswoman who just learned what a vulva is, Goop Lab runs the great risk of exacerbating it. 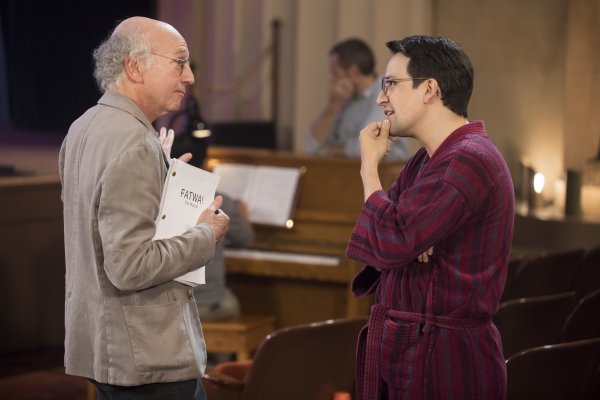 The 12 Best Curb Your Enthusiasm Cameos of All Time
Next Up: Editor's Pick