It’s a good thing Hawkins, Ind. isn’t a real place, because if it did exist, we’d have no choice but to wipe it off the map. Like Buffy the Vampire Slayer’s Sunnydale, Calif.—which was built atop a Hellmouth that ultimately devoured the fictional suburb—the Stranger Things town is cursed ground. Watching Stranger Things season 3 amid Chernobyl mania, I couldn’t stop imagining a Hawkins empty of its neon signs and middle-school dances and kids on bikes, as lifeless as the Ukrainian ghost city of Pripyat. A sad sight, to be sure, yet one that makes more sense than the decision to continue inhabiting a town that’s beset by monsters approximately once a year.

But there would be no Stranger Things without Hawkins, an intimate community steeped in ‘80s Americana, where geeks, cool kids, parents, cops, science teachers and one telepathic, psychokinetic girl can be relied upon to put aside their differences for the good of humanity. In fact, when we rejoin the gang for season 3, which comes to Netflix on the Fourth of July, in the summer of 1985—less than a year after season 2’s Halloween-set adventures—it seems that they could use yet another crisis to shake up the lovey-dovey monotony.

Of course, by now Hawkins’ annual showdown with the supernatural has itself become routine. And that pattern has, in turn, made the show as predictable as any of the movie or comic book franchises its young characters treasure. The same predictability makes these properties a safe bet for those who stand to profit off them as well as those who consume them like so much audiovisual comfort food. For those who’d prefer our entertainment to challenge us a bit, at least season 3 improves upon the recycled plots and warmed-over Upside Down mythology of season 2.

Things get stranger, as they are titularly obligated to do. Dustin builds a contraption to communicate with Suzie, thus proving to his friends that she exists, but ends up intercepting what he believes to be a Russian communiqué. El’s telepathic adventures reveal more nefarious activities in town than just boys complaining that girls are “a different species.” Magnets stop working. Nancy stumbles upon the creepiest news story this side of Bat Boy. And the cast is divided, more or less organically, into small, scrappy groups whose paranormal storylines will eventually converge.

It is, in other words, exactly what we’ve come to expect from a season of Stranger Things: Like the family-friendly ’80s horror and sci-fi touchstones they brazenly plunder—er, celebrate—eight new episodes juxtapose coming-of-age arcs and life-or-death consequences, real relationships and fantastical monsters, the sweet and the gross (season 3 favors Gremlins-style body horror). Battling supernatural forces turns out to be the perfect catalyst for various adolescent rites of passage. Teamwork is paramount. Kids (particularly Lucas’ flamboyantly pro-capitalist 10-year-old sister Erica, played by Priah Ferguson) say adorable things. The finale is bittersweet.

Though it still doesn’t have the freshness of the first installment Stranger Things, the new season marks an improvement over its predecessor, which essentially rehashed the original plot with a bigger budget and an absurd episode that sent El to Chicago. Hawkins National Laboratory is a ruin. Creators the Duffer Brothers wisely sidestep the narratively exhausted Upside Down. An ever-growing cast gives them the bandwidth to establish roughly five simultaneous storylines that feel novel for the show, if not for ’80s-nostalgia culture at large.

That complexity does create some problems for the show. Especially in the first few episodes, there’s just too much happening. Lots of excessively long action sequences not only get repetitive, but also push most character beats to the beginning and end of the season. And the Duffers’ take on female puberty is embarrassingly clumsy: Are El and Max really the kind of girls who’d pore over Tiger Beat and cheer themselves up with shopping sprees at The Gap?

Scored to (sigh) Madonna’s “Material Girl,” that bizarre scene—which could double as a Gap commercial—underlines what else has changed about Stranger Things since season 1. Once a surprise hit, the show is now valuable intellectual property whose kitschy, culturally literate aesthetic lends itself much more readily to brand tie-ins than the only other contemporary TV series with such wide appeal, Game of Thrones. (Night King Oreos, anybody?) This time around, the product placement is ubiquitous. Burger King and Coca-Cola, both of which are running promotions around Stranger Things, are written into the script. The show has also recently collaborated on product lines with H&M, Forever 21, Nike, Havaianas and Levi’s.

None of this is shocking in 2019, even for those of us who’d rather watch the occasional ad than have them seamlessly integrated into our entertainment. What’s notable is that it makes Stranger Things more than just a TV show. It’s a franchise. And franchises thrive on consistency. Before you buy tickets for a Marvel movie, you have a pretty good sense of how it will unfold; before you walk into a Burger King, you have a pretty good idea of how your burger will taste. There’s something comforting in knowing what to expect.

To some extent, Stranger Things has always been in the comfort business. Along with consistency—seasons that keep scaling up the original concept, like sequels, instead of broadening and deepening the ongoing story, like good TV—it offers the salve of nostalgia. Even more than the callbacks to Spielberg and Star Wars, it’s the way the Duffers enshrine the community spaces of the recent past, ugly and commercial though they often were, that resonates. As a Stranger Things skeptic, season 3 brought me the most pleasure in its many scenes set amid the harshly lit mall corridors, sticky multiplexes, public pools and country fairs where I was among the last micro-generation of tweens to run wild in the mid-’90s. Some of these places still exist, sure, but they’re no longer the bustling hotspots they were in the 20th century. Too many of us would prefer to shop, socialize and watch online. (Will the ironies of Netflix never cease?)

So it’s those imperfect, de facto public squares (which, as the show also notes this season, themselves replaced postwar America’s literal town squares) that have started to resemble the Chernobyl evacuation zone. Stranger Things allows us to escape that desolation, into an idealized ’80s that isn’t too much different from the retro virtual fantasia of the beloved Black Mirror episode “San Junipero.” It’s a thin imitation of what we used to have, but who could blame anyone for clinging to it? 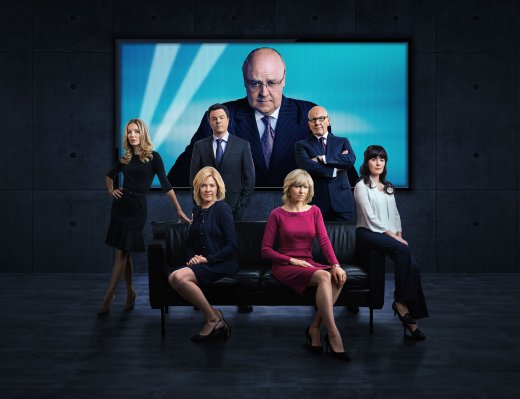 The Loudest Voice Shows Us What We Already Knew. That’s Not Redundant—It’s Exactly What We Need
Next Up: Editor's Pick