Why Queer Eye Is More Vital Than Ever in Season Two

In a sea of mostly unnecessary television reboots, it’s almost surprising to find one as politically au courant as Netflix’s Queer Eye. The show aired its first iteration on Bravo in 2003, and it was very much an artifact of that time, playing into broad caricatures of gay men to hook a straight audience. But 15 years later, a new version of the show, which debuted its first block of episodes in February, proved Queer Eye could work in 2018–and be done with a lot of heart and charm, no less. In this version, a new “Fab Five”–experts in the fields of grooming, food and wine, fashion, design and culture–travel to Georgia, where they encounter not just straight men in need of a place to shop beyond Eddie Bauer, but also women, gay men and, in Season 2, the show’s first transgender man, all of whom need a dose of life coaching alongside their makeovers. As fashion expert Tan France puts it: “The original show was fighting for tolerance. Our fight is for acceptance.”

The way Queer Eye does this is quietly clever and revolutionary: it’s a show about friendship among gay men dressed up as a makeover show. The warm banter and intimacy between the show’s hosts present a side of queer culture that most straight viewers would never get to see; it’s so rare to see a mainstream television series with more than one gay man on it, and rarer still to see those men embrace one another onscreen. And it’s not just the Fab Five: toxic masculinity tells us that men showing affection for other men is inherently gay, but Queer Eye shows how men, both gay and straight, can be kind and open with one another. It’s a worthwhile message, and a rare one.

Happily, Season 2 exemplifies this quality in the series, and offers a stronger batch of episodes than its first season, which featured a few low points–an unfortunate episode made light of police brutality by having a cop “jokingly” pull over the men as Karamo Brown, the series’ sole black star, was driving. (Later, during his makeover, the men rummaged through another cop’s belongings and found a Make America Great Again hat.) Queer Eye is at its least effective when it pretends that it can combat complex issues like racism and religious intolerance with its plucky, heart-on-its-sleeve approach to crossing the aisle. As encouraging as it might be to watch the Fab Five work warmly with conservative folks, the show’s bigheartedness can also make it feel anodyne.

Yet that isn’t necessarily a bad thing. Queer culture is enjoying a rich media renaissance right now, with series like Pose and RuPaul’s Drag Race earning critical acclaim and seminal plays including The Boys in the Band and Angels in America returning to Broadway. But for audiences that just want to tune into something light and let out a good cry on their sofas, Queer Eye has the power to show them a side of gay culture that previously might never have existed to them. That makes the series more than just entertaining–it’s vital. 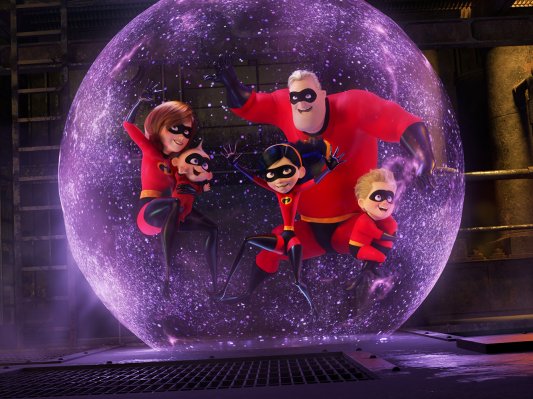 How Incredibles 2 Shows What It Means to Be Human
Next Up: Editor's Pick